Posted in: Disc Reviews by Jeremy Butler on October 29th, 2021 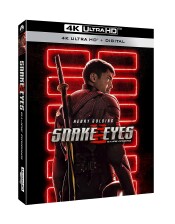 I really liked the film, but I don’t expect that it will be the savior that revitalizes the franchise. Without question it is the best of the three films that were adapted from the popular toy line, but even so I just didn’t find it compelling enough to serve as the launch point for a franchise reboot. I just don’t think it’s in the cards for G.I. Joe to become a movie powerhouse. Snake Eyes is without question one of the most popular characters from the television incarnation, and he was also the biggest draw for the film adaptation as well. Anticipation for a live-action telling of his origins has been in the works for years, with many hoping to see Ray Park, who played the character in the first two films (though we never see his face), reprise the role. However, much time passed between G.I. Joe Retaliation and this film, making that an impossibility. Stepping in to take over the role is Henry Golding, who you most likely recognize from Crazy Rich Asians, but who I recognize from The Gentlemen. The film is his first foray into the action film world, which was quite a risk for the film, but good thing for them, they got him some backup in the form of Andrew Koji, who we all should recognize from Cinemax’s (now to be reborn on HBO Max) Warrior.

When I heard about Henry Golding’s casting, I had some reservation. In my opinion, he had the look unquestionably, but discovering his lack of a fighting or action resume prior to this outing made me somewhat skeptical of his ability to give a convincing performance. However, after watching him, I give his performance a B plus; he was convincing, but there was room for improvement. Ironically, it wasn’t his fighting where the improvement was needed, as I found his skill on par with what you would expect. As previously stated, he is also surrounded by actors whose fighting resumes speak for themselves. Take Andrew Koji. Firstly, if you haven’t watched this man technical skill in the first two seasons of Warrior, you have no idea what you are missing, and I recommend that you correct this error immediately. Koji brings that same technical skill to this film, making his fight sequences without question my favorite, particularly in the fish market, where he takes on essentially an entire army all by himself, and is more than convincing doing so, especially when he gets his hands on two swords.

Koji isn’t the only martial artist in the film, however, as he is joined by Iko Uwais of The Raid franchise. He also did a Netflix series by the name Wu Assassins, but I think it is in everyone’s best interest to forget that was ever a thing. Back on topic, Uwais’ time is limited, but he establishes his presence quite quickly during Snake Eyes’ training. Between these two great martial artists, the film generates enough credibility as an action film, and as I said, despite not having a similar background, I found that Golding held his own among these two elites. How much of that was him and how much of it was the stunt team is a mystery, and I am happy to believe that he did the lion’s share of it.

As far as the action goes, I was satisfied. Where the film loses steam is with the overall story, particularly Snake Eyes’ origins. The film establishes his trauma early on, and it is clear that it’s the character’s driving force, but as the story goes on, the idea of his all-consuming pursuit for revenge becomes lessened and as such becomes less convincing. Part of this is understandable, given that the character is shown to be torn between his personal revenge and what he knows to be right, but that only partly explains it. I think the reason it becomes less convincing has to do with Golding not showing the right level of righteous anger for it to be convincing. I just didn’t feel like circumstances raised to the level needed to justify how far he was willing to go for his revenge. After all, he was just a kid when the tragedy happened, and he wasn’t directly responsible for what happened, so the weight of responsibility he felt for what happened didn’t feel authentic. I think having him play more of an active role in the tragedy, like maybe having him roll the dice (literally), would have help amp up the personal responsibility he felt over what happened.

Then there is the storyline with the gem. This is where the film really loses me. By attempting to infuse the mystical into a movie that was, up until this point, grounded in reality, undercut the film’s credibility, if you ask me. Why go mystical? You could have made the gem something more realistic. Absolutely, keep it a weapon, but why not make it some type of deadly virus or a next-generation type weapon. Yes, those ideas have been done to death, but they would have played a lot better here than going mystical.

Snake Eyes is presented in its original aspect ratio of 2.39:1. The ultra-high-definition image presentation is arrived at with an HEVC codec at an average of 65-70 mbps. The upgrades here are first in textures. You get some nice clothing feel and fine detail at the various locations. Black levels are the second huge bump here. There’s a lot of darkness with tons of action going on in near total blackness. Without good consistent shadow definition, this thing could get muddy really fast. Here’s where a disc has huge advantages over streaming. The extra bandwidth allows for deep blacks and incredible shadow definition so that you can actually catch the detail in that darkness. Compression issues and streaming bitrate limitations just can’t deliver this kind of image presentation when the contrast is so important.

The Atmos track defaults to a really solid 7.1 mix. The surrounds are quite excellent here. The rain and thunder elements make broad use of the space and give you one of the better immersive experiences. This is where great sound design becomes great audio presentation. Dialog comes through very clearly and like everything else is so nicely placed. The score delivers those action beats, and the subs deliver throughout.

Morning Light – A Weapon With Stories To Tell: (3:11) This short feature tells the myth of the sword through an animation process. It plays out and feels much like a video game cut scene.

Enter Snake Eyes: (9:32) This is pretty much a short making-of feature with plenty of behind-the-scenes footage that focuses on the big highway action scene.

A Deadly Ensemble: (6:22) A look at key characters and the actors who play them.

Arashikage: (6:59) A look at the clan from the film and some of the characters who make up the clan. There are some nice looks at the real locations in Japan.

The film is open-ended, obviously with the hope of leading to future sequels. As a one-off, I can accept the film. It isn’t the best, but it’s the best of the franchise hands down, and as such, I can accept it. However, in the event that the film does spawn a sequel, I will need story quality to be improved significantly to make the sequel worthwhile.

Jeremy Butler is a film school graduate of the International Academy of Design and Technology. He is been writing for Upcomingdiscs since 2012; however, movies have played a big part of his life for much longer. Favorite genres include horror, science fiction/fantasy, and comedy. Favorite movies are V for Vendetta, Boondocks Saints, Kiss Kiss Bang Bang, and The Godfather.
Independent Film Round Up October 2021 The Suicide Squad (UHD Blu-ray) (4K)