Posted in: Disc Reviews by Brent Lorentson on May 16th, 2022 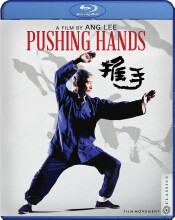 Director Ang Lee has come a long way since his 1991 debut film Pushing Hands.  When you look at Ang Lee’s impressive resume, the only film that stands out is sadly his only major misstep as a director, and that’s the 2003 film Hulk, the movie I feel audiences have been trying to forget and comic fans simply want to pretend doesn’t exist.  When you look at the rest of his resume, there are some impressive titles that have made a difference within the Hollywood cinema landscape.  Crouching Tiger, Hidden Dragon, Brokeback Mountain, and Life of Pi are just a few of his films that are standouts that were commercial successes but at the same time define his unique style and focus when it comes to character. Pushing Hands is character study that was released during the rise of independent cinema in the 90’s when film focused more on characters and finding unique voices that could tell great stories on a limited budget. What makes the film all the more unique is that it’s a martial arts film without the violence we’re used to seeing on the big screen, and instead its focus is more on the holistic methods of tai chi.

The film opens with Mr. Chu (Sihung Lung) and Martha (Deb Snyder), his American daughter in-law, at odds with one another.  The two butt heads most because of their cultural differences, and we get to see how difficult it is for them to live under the same roof. Back in China, Mr. Chu was a well respected tai chi master, but now he lives in America with no understanding of the language, living under his son’s roof, and he simply rejects the American way of living because he is stuck in his old ways. Martha is a housewife who is attempting to write her first novel but is thwarted by her father-in-law’s antics that are a constant distraction. Alex Chu (Bozhao Wang) is the dutiful son who is caught in the middle of being a loyal and loving husband while being the caretaker of his father. This dynamic and how it’s presented is very relatable for those in culturally blended families. If this was the only layer to the story the film would still be pretty good, but there is so much more going on that makes this a fun and charming viewing experience.

Mr. Chu starts teaching tai chi at a local school that is attended by others who have relocated from China and still want to hold on to the culture they love. In the training sessions we get some over-the-top lessons with tai chi that play more for laughs, especially when Mr. Chu has the opportunity to impress a cooking instructor, Mrs. Chen (Lai Wang). The film takes an unexpected turn as it shifts into a romance between Chu and Chen. It’s sweet, but this pushes on the brakes when the pair realizes their kids are trying to set them up on a date. Here is one of the more interesting cultural differences that come up. In American films we find this scenario sweet; heck, at the time this film was made there was a sub-genre of films that focuses on friendships and romance in the golden years. In Pushing Hands they treat this as a bit of an insult, and, well, it sort of makes sense, especially when these characters are very strong and prideful individuals.

Then the film shifts gears again when Mr. Chu sets out for his own independence and attempts to brave the hustle and bustle of New York City on his own. Again this is one of those moments that reflect the proud nature of the character and makes this an engaging story piece. This is very much a character-driven film, and the visuals are relatively simple and non-distracting so that the focus is on the performances. The performances are what sell this film which shows that Ang Lee always has had a great understanding of how to tell a story. What we see in this film is a director cutting his teeth with techniques he would go on to use in later films. It’s no surprise the man has gotten the accolades he’s received over the years and just how far he’s come since this debut film.

Pushing Hands is presented in the aspect ratio 1.85:1.  The 1080p image is arrived at with an AVC MPEG-4 codec at an average of 34 mbps. Despite having crisp and clear image quality, this is somewhat a drab viewing experience. The color palette is very natural with soft tones, so the visuals are a bit bland. Skin tones are natural, and though the film looks clean and may look as good as it did when it was first released, it’s not all that impressive either.

The 2.0 Mono track is blended with English and Mandarin with English subtitles. This is very much a talking heads film and thankfully does have subtitles that seem to match up well with the action on screen.

Round Table Discussion with Filmmakers James Schamus, Ted Hope, and Tim Squyres: This is more a Zoom chat with four screens between the producers and co-writers of the film moderated by a film critic. The conversation goes on for just over an hour and discusses a lot of how the film was brought together and its reception.

Ang Lee is a bit hit-or-miss for me. Personally my favorite films by Lee have been The Ice Storm and Taking Woodstock, but I can respect that the man does have an impressive filmography.  Pushing Hands is definitely a film for those who enjoy art house cinema and don’t mind subtitles. If you’re expecting kung-fu fights you’ll hate this, but if you’re wanting to see a solid drama with good performances and well rounded characters, Pushing Hands is worth checking out.

Brent Lorentson is a horror writer and film critic based out of Tampa, Florida. With a BA in Digital Film, he co-wrote and co-directed Scavenger Hunt. His short stories have appeared in various horror anthologies. In 2019 his short script Fertile Blood will be a part of the anthology horror film Slumber Party. He is currently working on his first novel A Dark and Secret Place set to be released in late 2019. Favorite Films: Taxi Driver, Fight Club, I Saw the Devil, The Wild Bunch, Dawn of the Dead, A Clockwork Orange, Pulp Fiction, Heathers, The Monster Squad, and High Fidelity.
Kin: Season 1 Breakout (Blu-Ray)