Posted in: Disc Reviews by Brent Lorentson on June 14th, 2022 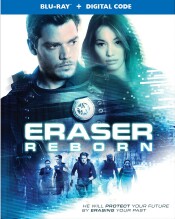 In 1996, when Eraser came out, it was pretty much what everyone expected from an Arnold Schwarzenegger film: lots of action and cheesy one-liners. It was far from Arnold’s finest work, but it was fun, and the big guns used in the film were pretty cool, too. Eraser is a film you can look back fondly on if you grew up in the 90s, because it was silly fun and nicely directed by the legendary Chuck Russell, who had a pretty good streak of films going when he did Eraser. Before he’d had success with the breakout Jim Carrey film The Mask, and before that he had the remake of The Blob and A Nightmare on Elm Street 3: The Dream Warriors. I bring this up because the reason Eraser worked when it did was because it had the biggest action star on the planet in its lead role and a talented director working behind the camera, and to top it off a $100 million dollar budget to play with. Now we are talking 25 years later, and Warner Brothers has given us a sequel no one in their right mind has asked for, and it doesn’t even have its star. Dusting off older properties is the rage in Hollywood, and at least most of these sequels are warranted, but Eraser: Reborn comes at us about as unwanted as solicitors on a Saturday morning when all we want is to sleep in. Despite everything, I still went in to this with an open mind, hoping maybe they returned to this intellectual property because they had something new and cool to bring to the table. Spoiler alert: they didn’t, but that’s why I’m here to take the visual bullet so you don’t have to.

Mason Pollard (Dominic Sherwood) is a U.S. Marshall with the specialty of helping “Erase” people. Basically, when witness protection isn’t good enough, he makes it look like you are dead and takes you off to some exotic locale to live out the rest of your years in hiding. The opening scene shows this in an action sequence that really isn’t inspiring, but shows just how much Pollard likes to work alone. It doesn’t take much to realize that Sherwood is not Arnold Schwarzenegger, and I don’t fault Sherwood in the least, but it is a disservice to the audience that is expecting an Eraser sequel when they pick a guy who exudes nothing from the 90s film or any of the actors of the time. Even casting Christian Slater would have worked, though that might have been just too much of a *wink and nod* to the film Broken Arrow, which seems to have been the film heavily lifted by the writers here, but I’ll get to that later. But the point is, if you’re going to try to do a 90s sequel and keep that vibe and make the audience nostalgic for that time, you need to cast an actor from that time, or else what is even the point of trying to make this film?

Then we have Rina Kimura (Jacky Lai), who is married to a member of this elite crime organization that cleverly is called “the syndicate”. Rina is treated as arm candy by her husband, and it’s implied that he pimps her out to other members of the syndicate, but we don’t get much of a glimpse into any of this; instead we see already Rina is working for the FBI and they are using her to get information on the syndicate, while at the same time Rina is looking for her own way out. The film shows its hand too soon when a member of the syndicate confronts Rina and she reveals she is working for the FBI and the man retorts that the FBI works for them. This dialog exchange should have been excised from the film altogether, because it opens up a rabbit hole of numerous plot holes, like most obviously, if they had an insider with the FBI, then how did they not know about Rina? Then when Rina needs to be “erased”, why didn’t the inside guy take care of it? Or better yet, why wait till there are so many people in the house to have Rina break into the safe and not have her simply do it when her husband is in the shower? I understand it is for dramatic effect, but you expect me to believe the FBI was able to sneak an SUV up to the front door of this heavily secured home and simply pick her up without any sort of confrontation?

Then we get to see Mason put his boxing skills to the test with his mentor Paul Whitlock (Mckinley Belcher III) in a scene that is practically lifted out of the opening moments of Broken Arrow, and one doesn’t need to be too astute to realize Whitlock is a bad apple and he’ll be showing his true colors soon enough. I wouldn’t have a problem with this if Whitlock was actually treated as a more menacing figure because when he reveals himself to be one of the bad guys there could have been promise, but instead he’s nothing more than a glorified turncoat, and, well, there is nothing interesting there, because it’s revealed far too soon.

Because Rina is such an important witness, Mason has her shipped off to South Africa to be put in a safe house. Before she leaves, though, she hides this mysterious gold bar, and it turns out to be something that members of the Syndicate want back. Rina also has in her possession a device that has access to some cryptocurrency she wants to keep for herself. For the record, Rina really does nothing but make Mason’s job more difficult to protect her, but somehow he manages to get feelings for her. But just when you think this film can’t get any more absurd, we find out Mason has another hideout in South Africa that used to be an animal sanctuary. This is introduced to set up one of the silliest moments in the film that involves a hippo attack. The story only continues to spiral from here to involve black market endangered animals.

Trying to make sense of this film is not worth the time or the energy. The film would have been better off as its own film rather than trying to capture the nostalgic wonder of an Arnold Schwarzenegger most audiences have forgotten about, Director John Pogue is a guy who has shown promise in the past with films like The Quiet Ones and the not-as-bad-as-it-sounds Deep Blue Sea 3. Pogue is definitely a capable director who can do action on a budget, but the problem is that he needs a better script, and when you look at his writing credits, you know he’s better than this film.

Eraser: Reborn is presented in the aspect ratio 2.39:1. The 1080p image is arrived at with an AVC MPEG-4 codec at an average of 22 mbps. One thing that surprised me is that this is a good looking movie with lots of color, and the image is very sharp. It is a step above the usual straight-to-video release with the image presentation. Colors definitely pop when the film shifts to South Africa, and a lot of detail is captured in the costumes. The film has a 90’s action look to it, which fits, but when the CGI is introduced, it is pretty bad.  In the night shots and low-light shots detail gets lost where the blacks are almost too black and you can’t see much of what is going on.

The 5.1 DTS-HD Master Audio track is pretty well done as a mix and works well in a surround sound setting. The action scenes are loud, and the bass gets a pretty good workout. The design does make the action scenes feel more immersive than the standard straight-to-video release. The score sounds pretty good here as well. There are some spots where the dialog isn’t very clear and sounds a bit low, but it’s not too off-putting.

The Warrior and The Witness: Making Eraser: Reborn (9:12)  A behind-the-scenes look at the making of the movie from concept to stunt work.

I’m kind of at a loss for words on this one. As a standalone action film, if it didn’t try so hard to connect to the first film, maybe this could have had a shot of being good. While I don’t hate this film, it’s hard to ignore how bad it really is. The showdown on the docks in the closing act of the film is one that sums up my feeling for the film: did we really need that? If you’re a fan of 90’s action I’m sure you’ll enjoy the references and style, but it’s going to leave you wanting more and may even have you running to your DVD collection  to dig out a favorite action film to “erase” the memories of this film.

Brent Lorentson is a horror writer and film critic based out of Tampa, Florida. With a BA in Digital Film, he co-wrote and co-directed Scavenger Hunt. His short stories have appeared in various horror anthologies. In 2019 his short script Fertile Blood will be a part of the anthology horror film Slumber Party. He is currently working on his first novel A Dark and Secret Place set to be released in late 2019. Favorite Films: Taxi Driver, Fight Club, I Saw the Devil, The Wild Bunch, Dawn of the Dead, A Clockwork Orange, Pulp Fiction, Heathers, The Monster Squad, and High Fidelity.
Jurassic World Dominion Indiana Jones and the Raiders of the Lost Ark – Limited-Edition Steelbook (UHD Blu-ray) (4K)