Posted in: Disc Reviews by Gino Sassani on August 23rd, 2022 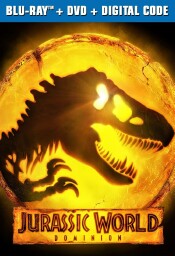 “Bigger. Why do they always have to go bigger?”

You don’t really need me to answer that one, do you? What started with Jurassic Park in 1993 and even earlier with the blockbuster book by the late great Michael Crichton has actually been 65 million years in the making. When an idea has been percolating for that long, you have to go bigger, or the audience will go home. Expectations take a bite out of your option,s and by a sixth film you really have to come up with a game stopper, so what do you do? You reinvent the franchise after two sequels failed to capture the magic and awe that was Jurassic Park. You let the idea sit for a decade or so, and then you bring it back with enough of the new and enough of the old to bring folks back into the theaters. And that’s just how they did it with the Jurassic World trilogy. The first two films gave us a new cast of characters with the likes of Chris Pratt and Bryce Dallas Howard. A Jurassic Park has finally opened, and it’s called Jurassic World. Someone decided a slight rebranding might be for the better. Jurassic World ends up suffering the fate the first film tried to warn them would happen. But by the end of the second Jurassic World film we finally get what I felt I was promised a long time ago. The dinosaurs are no longer apart from the world on a secluded island where dinner has to be delivered, usually by helicopter or crashed plane. Now the dinosaurs are loose around the globe, and the dinosaurs finally get a wide variety of snacks with six billion menu choices.

It’s been a few years since the dinosaurs were let loose on the globe, and it has had some serious consequences, that is, in addition to the people who get eaten. There has been a huge black market for all things dinosaur. From secret illegal breeding programs to exotic wet markets where you can buy dinosaurs, dinosaur meat, or anything else connected with that business model. I’m sure our visit to this wet market is at least partially inspired by the Chinese wet markets that display exotic animals and might be where COVID was let loose on the world. There’s certainly some familiar lessons to be learned here, I’m sure. One of the results of all of this black market activity is the engineering of prehistoric animals, and not all of them are dinosaurs. It seems giant locusts have been turned loose, and they’re eating up the planet’s crops at an alarming rate. It appears it’s no coincidence that they eat all crops except those developed by a company called Biosyn. Various characters are drawn into this situation by their own, sometimes rather meandering, route to the truth.

Ian Malcom (Goldblum) has been working for Biosyn. Not sure exactly what he does, and apparently he doesn’t really know either. No one really figured there was time to flesh out the character details, a flaw that occurs far too often in this film. Claire Dearing (Howard) has been part of a dinosaur rescue group that sneaks into facilities to try and expose what bad guys are doing to the poor dinosaurs. Owen Grady (Pratt) has kind of settled down with Claire to act as adopted parents to Maisie (Sermon). Now if you recall, she was discovered to be genetically engineered by her grandfather, who developed some of the science for old man Hammond. She’s connected to the dinosaurs in some supernatural way that also never gets quite fleshed out here. She’s kidnapped by Biosyn because they believe she holds some kind of DNA key. Meanwhile Ellie Sattler (Dern) seeks out her old professor pal Alan Grant (Neill) with info slipped to her by Malcolm to connect Biosyn with those pesky locusts. Right about now I think we’ve gotten as many plot threads as we can handle and still have time for the requisite dinosaur action. Guess again.

Enter DeWanda Wise as Kayla Watts. She’s a pilot who takes on whatever cargo there might be, no questions asked. She’s delivering some goods when she discovers Maisie being taken by the bad guys. It pulls on some heartstrings, and before you know it she’s helping some of our good guys to get into Biosyn. This is Ellie and Alan, who don’t really know anything about the little girl they encounter while trying to get proof Biosyn is behind the locusts. Eventually all of these characters collide, literally, and have to find their way through a maze of tunnels where there be dinosaurs. By this point I was hoping that Kayla would relax her no-questions-asked policy, because I happen to have a few. Nothing doing. She’s sticking to her guns, which is figurative. If she really had some guns, there might not be so many close encounters of the prehistoric kind.

What I’m trying to say here is that this plot is unnecessarily complicated and convoluted. The writers wrote themselves into big corners throughout the franchise, and with this being the last film for a while they had to try to wrap things up. All of this while bringing in the three leads from the first film and throwing some truly unnecessary plot threads which means even at 2 ½ hours there’s not enough time to develop these characters and still give us the goods on the dinosaurs.

The dinosaurs are still the stars of the show, but again they overdid things a bit. You’ll see more species of dinos than in all of the other films combined. They also go to the people running from dinosaurs and escaping the chomp well way too many times. There are moments when I was feeling like they already did this … not in the previous films (although they did that too), but in the film I’m watching now. The dinosaurs look great, and I wish Stan Winston, who developed the animatronic creatures in the original film, were alive to see just how far you can go these days.

It’s great to see Dern, Goldblum, and Neill all together again. I just wish it weren’t all so rushed so that we could spend some quality times with these guys. The film also attempts to be too many things thematically. This is kind of like an Indiana Jones meets James Bond meets Mission Impossible meets Jurassic Park. The film then expends resources for other interesting characters/actors, but they just don’t get developed. Law & Order’s BD Wong returns from the first film to play the repentant Dr. Henry Wu. There’s the necessary bad guy, who is Biosyn’s head guy Lewis Dodgeson, played by Campbell Scott. He’s cardboard through and through, but it’s not the actor’s fault. He just doesn’t get the depth the play it all out. No time for real motivation. There’s just too much to do here. Daniella Pineday plays a really terrific mercenary/hitwoman with plenty of attitude, at least I think that’s what was there in the few minutes she got to do her thing. Another thread that needed to be more fully explored or cut from the narrative altogether.

Jurassic World Dominion is presented in its original aspect ratio of 2.00:1. The 1080p image is arrived at with an AVC MPEG-4 codec at an average 30-35 mbps. The high-definition image presentation is likely not near the equipment show-off piece the 4K release must be. We only had this disc for review. For its part, the Blu-ray looks pretty good. There’s a lot of texture to the dinosaurs, and exterior shots are quite clear and void of artifact. Darker scenes aren’t quite so good, and this is where you’ll likely see improvement in the UHD, with HDR offering better contrast. There are some impressive vistas, but we’re here to see the dinosaurs, and in the better lighting conditions there’s a lot of detail here. The live action stuff was done on film so was native 4K. I just wish Universal had sent that as they usually do.

The DTS-X is everything you can expect it to be. The surrounds truly bring these environments to life. The subs help to enhance that experience by literally giving weight to the creatures through thunderous footfalls and deafening roars. The score is always well placed, and I was partial to those quiet moments of character where we get the subtle strains of the John Williams original themes that kind of pull on the emotions just a little bit. Dialog cuts through it all just fine. There are plenty of wonderful surrounds. The ice cracking while two of the characters deal with a dino on a frozen lake is appropriately eerie and urgent.

All of the extras can be played as a single play-all. But here are the three selections you can navigate individually:

Battle At Big Rock: (10:17) This was a internet video story that was released in anticipation of the film itself. It concerns a family out camping who have a prehistoric encounter. It’s not really connected to the film but was intended as a bit of a tease.

A New Breed Of VFX: (6:15) This feature gives us a look at how much the technology has improved in the 30 years since the first film.

Dinosaurs Among Us – Inside Jurassic World Dominion: (47:09) This is the real behind-the-scenes feature, and it is split into five parts. You get a play-all option, of course. The first deals with bringing together the Jurassic Park/World elements and casts. Lots of footage of them interacting behind the scenes. The second deals with that underground dino market, and we get a nice look at how it all worked behind the scenes with a close-up look at the production design. The third deals with the animatronic practical dinosaur stuff, and you get to see how all of that puppetry worked. The fourth covers the action stunts, and the final piece takes us behind the scenes on the final moments of shooting for the film.

Don’t get me wrong. The film is entertaining from beginning to end. It has great dinosaurs, so that’s a given. There are also some really sweet Easter eggs, mostly from the first film. You gotta love all of that, but the narrative is an unholy mess, and that’s going to make this film less of a fun film in 20 years. The first film is still great fun to watch. If you think cloned dinosaurs are menacing and scary, here’s hoping they don’t clone these writers. Now that would be terrifying. “This isn’t the way to go about it anymore.”

Gino Sassani is a member of the Southeastern Film Critic's Association (SEFCA). He is a film and television critic based in Tampa, Florida. He's also the Senior Editor here at Upcomingdiscs. Gino started reviewing films in the early 1990's as a segment of his local television show Focus. He's an award-winning recording artist for Omega Records. Gino is currently working on his 8th album Merchants & Mercenaries. Gino took over Upcomingdiscs Dec 1, 2008. He works out of a home theater he calls The Reel World. Favorite films: The Godfather, The Godfather Part II, The Body Snatcher (Val Lewton film with Karloff and Lugosi, not the pod people film), Unforgiven, Gladiator, The Lion King, Jaws, Son Of Frankenstein, The Good, The Bad And The Ugly, and Monsters, Inc.
Beast (2022) Belle Collector’s Edition (UHD Blu-ray) (4K)