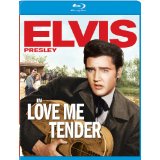 Elvis Presley was easily one of the most impactful pop culture icons of the 20th century during his life, and that status has barely waned in the decades after his death. (Or “alleged death”, given the number of Elvis sightings each year.) Presley obviously made his most lasting mark in the world of rock and roll music (and fashion), but he also had a surprisingly fruitful film career. Though none of his movies turned out to be cinematic masterpieces and no one was confusing him with Marlon Brando, The King brought his charismatic presence to more than 30 movies between 1956 and 1969. He was 21 when he made his film debut in Love Me Tender.

Fox has just released the 1956 Western/Civil War drama on a nifty-looking Blu-ray. (More on that in the Video section.) The first thing that struck me about the black & white film is that Presley — arguably the most famous person in the country at the time — is not really the star.

Love Me Tender started life as a script called The Reno Brothers. Three of the brothers, led by Vance Reno (Richard Egan), are Confederate soldiers during the final days of the Civil War. Thinking they’re serving the Confederacy, the brothers lead a robbery of a Union Army payroll. After learning the war is finished, they decide to keep the money as spoils of war. Vance is especially keen to return home to his family farm and use the money to marry his beloved sweetheart Cathy (Debra Paget). Unfortunately, the three Reno brothers had been presumed dead, and Cathy had recently married their youngest sibling Clint (Presley).

The King — who receives an “and introducing Elvis Presley” mention during the opening credits — doesn’t pop up until the 19-minute mark of the film. It’s a curious choice for a film named after one of his songs and sold almost exclusively on his star power, but it turns out to be a shrewd decision. You’d expect Elvis to be the romantic hero of this sort of film, but it’s Egan who ably drives the film (and who gets the gratuitous shirtless scene toward the end). It’s a smart move because Elvis was way too green as an actor to carry a movie.

Presley’s eagerness actually serves the boyish, naïve character of Clint quite well. Clint idolizes his oldest brother, and Love Me Tender doesn’t really get interesting until his jealousy over Vance and Cathy’s connection boils over. (There’s also the matter of the stolen money to deal with during the film’s climax.) Elvis isn’t nearly as effective when he has to portray Clint’s rage, but I give him credit for tackling a character with an honest-to-goodness emotional arc for his film debut. Not surprisingly, he’s far more successful when he’s playing the happy-go-lucky side of Clint, who happens to swivel his hips and play guitar suspiciously like rock star Elvis Presley.

In fact, there weren’t any songs at all in the movie when Elvis originally signed on to the project. Of course, his manager — the legendary Col. Tom Parker — made sure to alter that situation to his advantage. (More on that in the Special Features section). The result is the title tune — along with three other upbeat country songs — being somewhat awkwardly shoehorned into the film. (“Love Me Tender” is heard twice, with the tune being inserted in the film’s final shot to soften the blow of the downer ending.)

Love Me Tender is fairly standard, old-Hollywood Western fare when the genre was at its zenith. The performers do solid, serviceable work, but the movie is memorable mostly because it served as the film debut of the King of Rock and Roll. Based on his work here, he shouldn’t have — and didn’t — quit his day job. But Love Me Tender also turned out to be the start of a pretty lucrative part of his career.

Love Me Tender is presented in its original aspect ratio of 2.35:1. The 1080p image is arrived at with an AVC MPEG-4 codec at an average of 33 mbps. I actually didn’t know this movie was in black & white — the image of Elvis on the Blu-ray case shows him in color — so I was pleasantly surprised to see a high definition image that is often dazzling. That means there’s excellent contrast and black levels to go along with a pleasing amount of subtle grain. Everything from the mountainous terrain to the threads on the period costumes feature terrific detail. Overall, this is an impressively clear presentation of an almost pristine print. (There’s no shimmer, and I spotted only one very brief bit of scratching toward the end.)

The DTS-HD Master Audio 5.1 track is not overpowering by any means, and the original mono track has been restored. (You can also listen to the film with the DTS-HD Master Audio 1.0 track.) So it’s not surprising to hear the rears play an extremely understated role, where a modern film would probably incorporate more active immersion. (The best example is a subtle echo effect during the film’s climactic showdown.) The overwhelming majority of the action remains in the front speakers, even during potentially dynamic/chaotic scenes like the intense opening robbery during the first act. Dialogue is really quite clear, and the overall track is impressively free of any popping or hissing. But the rousing score by Lionel Newman is occasionally a bit hollow and, again, remains mostly confined to the front.

You’re pretty much getting the exact same bonus material — presented in standard definition — that was included in the 50th Anniversary Special Edition DVD released in 2006.

Audio commentary by Jerry Schilling: The “noted Elvis historian” grew up in Memphis with Presley and went on to produce nine documentaries on The King. He talks about how Presley had been an usher in his hometown movie theater and had always loved the film world. Schilling is a font of Elvis information, but he wisely stays quiet during the musical interludes. Naturally, the track is a bit fawning, but Schilling gets his point across: a film career wasn’t a lark for Elvis; he took this venture very seriously.

Featurettes: A trio of featurettes from 2006-07 that previously appeared in the film’s DVD release:

“Elvis Hits Hollywood” (12:43) expands on Schilling’s claim that Elvis was serious about being a movie star. More importantly, he saw acting as a key to career longevity (as opposed to the fickle world of rock and roll).

“The Colonel & The King” (11:03) is a profile on the colorful character — alternately called a “hustler” and a “carny” — credited with inventing rock and roll culture in the United States through his work with Elvis. The talking heads here don’t shy away from Col. Tom Parker’s dark side and his eventual fallout with Elvis. The tone here is admiring, but not exactly flattering.

“Love Me Tender: The Birth & Boom of the Elvis Hit” (8:06) examines the genesis of the titular song, which was originally a Civil War ballad/choir staple called “Aura Lee.” It was also notable for being Presley’s first major ballad, which endeared him to older audiences who were weary of his rock and roll persona.

Love Me Tender: The Soundtrack: (7:32) This featurette explains how Elvis’s career was skyrocketing at this point and he’d signed on to the movie when the role of Clint was a non-singing part. Col. Tom Parker, however, saw movies as a way to sell records and had a total of four songs inserted into Love Me Tender, reportedly to Elvis’s chagrin. (In addition to the title track, the other songs are country toe-tappers “We’re Gonna Move”, “Let Me” and “Poor Boy.”) This mini-doc also gives an uncredited Ken Darby his due for writing “Love Me Tender.”

Trailers: Includes both the original theatrical trailer (2:21) and a preview with Spanish title cards (2:04) that reveals the movie’s Spanish language title was La Mujer Robada. In English, that translates to the more plot-appropriate “The Stolen Woman.”

Much of Elvis’s filmography — particularly the musical comedies — are maligned for being blatant cash-ins and extended commercials for his music. But Love Me Tender, looking and sounding quite good in this Blu-ray from Fox, is different. It marked the first and last time Presley didn’t have top billing in one of his films, but it also showed a performer eager to please and willing to work hard to become a movie star.