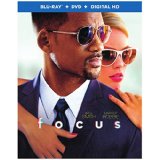 Focus is presented in an aspect ratio of 1.85:1. The 1080p image is arrived at with an AVC MPEG-4 codec at an average of 28 mbps. The image is blemish-free throughout and features inky black levels with terrific separation, which is especially evident during the early scenes where Nicky and Jess first meet and flirt. At the other end of the spectrum, the picture is vibrant and filled with bursts of color when the action shifts to Buenos Aires. There is also tremendous fine detail on display. (Smith is at his movie-star peak here, but you can still make out the lines on his face that make Nicky seem more like the weary con man he is.) A big part of the appeal of Focus stems from the two pretty, impeccably-attired leads; this Blu-ray from Warner Bros. follows suit with an attractive, equally-flawless visual presentation.

At first glance, the DTS-HD Master Audio 7.1 track might feel like overkill given that Focus is a largely dialogue-driven drama. (For the record, the dialogue is completely clear and well-balanced with the rest of the sound elements.) However, it ends up being a surprisingly engrossing presentation that sometimes adds heft to the action on screen. I’m specifically thinking of the French Quarter sequence and the way the subs and rears beefed up “Sympathy for the Devil” during the scene with B.D. Wong’s high-roller. There’s also a great bit of directionality on display during a few race track sequences in Buenos Aires.

Masters of Misdirection — The Players in a Con: (10:25) We’re introduced to Apollo Robbins, the real-life con man/pickpocket who served as a consultant for the film. Robbins gives us a breakdown of con man terminology (“mark”, “wire”, “cannon”) and we also see rehearsal footage of Robbie perfecting her pickpocketing skills. Easily the most interesting special feature on this disc.

Will Smith — Gentleman Thief: (5:52) Smith talks about exploring the psychology of his character. Meanwhile, other cast and crew members point out how the actor’s charming on-screen persona is perfect for a character who gets people to trust him and is able to focus their attention where he needs it to be.

Margot Robbie — Stealing Hearts: (4:08) Recycles some of the rehearsal footage of the actress learning how to be a proper pickpocket. Also delves into filming the French Quarter sequence and Robbie’s enthusiasm for learning how to steal people’s watches and wallets.

Deleted Scenes: (8:02) These are mostly longer, more vulgar versions of existing material in the film. (Adrian Martinez tries out a series of crude sexual punchlines for the scene with Farhad in an ambulance.) The best scene is a nice, extended showcase for Gerald McRaney. The scenes are not presented as separated entries, but you can use your remote to skip chapters.

Alternate Opening (2:44) Instead of starting the film with Nicky and Jess’s meeting, we get to see Nicky and his crew scamming a jewelry store. Not a bad scene at all, but also not necessary since we end up seeing the crew in action later on.

Focus makes for a breezy, lively diversion. Naturally, the final act has some swerves that you may or may not see coming. It’ll largely depend on how hard you’re looking, even though Ficarra and Requa’s script overly telegraphs one such twist. (Nicky is speaking to the audience as much as he is to Jess whenever he’s doling out wisdom.) For the most part, the filmmakers — like their wily protagonist — do a good job of making sure the audience looks where they want us to look.