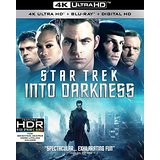 The rumors were rampant, and I won’t address them at all here. Chances are you know the spoilers, if you want to know them, already. I won’t chance ruining it for the few that have avoided any information on the film. I will tell you that Abrams has managed to weave a touching love letter to the Trek faithful into what again is a hugely mainstream film that should kick some serious butt at the box office once again. It’s almost as if he wanted to thank the fans who did finally climb aboard his Enterprise. There’s a tribble, and you’ll find a model of the NX-01 Enterprise, among others. The writers pay tribute to some of Trek’s best phrases. Of course McCoy’s going to deliver one of his “I’m a doctor not a…” lines.
Scotty’s going to be called a miracle worker. And the film ends with the beginning of the crew’s five-year mission. This film is just as good at appealing to the masses, but it manages to bring the faithful in with enough nods and references to bring tearful smiles to our faces. There’s a lot of love here. Maybe it didn’t come from Abrams at all. Credit it to writers Roberto Orci, Alex Kurtzman, and to a lesser degree Damon Lindelof. They are confirmed Trek fans, and it shows.

“You think you’re safe. You are not. Is there anything you would not do for your family?”

The Star Trek family is gathered once again. Kirk (Pine) and crew are in the middle of a mission gone wrong as the film opens. Kirk and McCoy (Urban) are running for their lives on an alien planet as Spock (Quinto) is setting off a device to save the primitive planet from destruction. That pesky prime directive is in the way, and Kirk is called on the Starfleet carpet for his actions. He’s about to lose his command to Christopher Pike (Greenwood) when Starfleet succumbs to a terrorist attack at a secret spy station in London called Section 31. The man responsible is one of their own, a man named Harrison (Cumberbatch). Kirk appeals to Admiral Marcus (Weller) to pursue the villain into Klingon space. He’s given the go-ahead and 72 special new photon torpedoes to take the guy out. Marcus isn’t looking for a trial. This is all-out Bin Laden-style find-and-kill-with-prejudice time. Kirk’s fine with the idea, but it presents a moral dilemma for many in the crew. Bringing Harrison back alive is going to be problematic, particularly when many players aren’t who they appear to be. Kirk can’t tell the good guys from the bad guys and has to fly on instinct, a process his Vulcan science officer doesn’t quite get. By the end of the film the two come to a greater understanding of each other, and we see just a flash of the relationship yet to come.

One of the reasons for Star Trek’s longevity is that it’s never the same kind of story, or at least it doesn’t have to be. In Star Trek you can tell a courtroom story one time and an action thriller the next. You can tell a western or a buddy-cop story. The canvas is blank, and you don’t have to be bound by one single framework. That’s what makes this film even better than the last. Abrams delivers many kinds of films rolled into one. There is a Die Hard scene where Kirk is battling a futuristic helicopter. The opening scene looks like something out of Avatar. There’s political intrigue. There’s even a scene straight out of Butch Cassidy and the Sundance Kid.

Abrams delivers his Star Wars audition reel here as well. There’s a space chase/fight that looks right out of the Death Star battle. Remember the Millennium Falcon’s sweet sideways escape through the closing doors? It’s here with a shuttle that’s saucer-shaped enough to even look like The Falcon at chase speed.

The movement from one kind of set piece to another makes this film’s over two hour running time feel amazingly short. There’s as much thrilling action here as you’ll find in any superhero/comic movie this summer. Star Trek has never been this intense. I haven’t seen this much non-stop action before in a Star Trek film or episode. It’s the ride of the summer so far, even besting Iron Man 3. The special effects take the franchise to a level you have not seen before. This is groundbreaking stuff here. The space battles top even the Borg entanglements from Next Generation highpoints. The Enterprise takes one hell of a beating in action sequences that owe more to the old World War II dogfight movies than science fiction. Abrams’ sound design even sneaks in some sound effects that are very much reminiscent of a fighter plane’s machine guns. This is the most rapid-fire action you can imagine. There’s plenty of old fashioned fighting to be found as well. Spock gets himself in a thrilling brawl with Harrison as they jump from flying cargo carrier to another. Sure, it stretches credibility in enough places, but never enough to have you rolling your eyes.

That doesn’t mean the film sacrifices character and story for all of this nail-biting action. With one film under their belts, the actors have really warmed up to their parts. The Spock/Kirk relationship evolves throughout the film from one of distrust to the gut-wrenching moments of a reworked Wrath of Kahn moment that recalls Spock’s death in that 1982 fan favorite. The chemistry between Pine and Quinto has developed into something special. Sure, it’s too early to compare it to the Shatner/Nimoy relationship, but you can absolutely see genesis of that kind of understanding. Chris Pine gets to really be James Kirk here. He even gets himself some tail, literally. Keith Urban continues to channel the spirit of DeForest Kelley as he remains the most faithful to the original performance. Zoe Saldana continues to be underused as Uhura. She’s relegated to some emotional scenes with Spock and spends too much of the film pouting and angry. John Cho’s Sulu has truly evolved, and you are seeing the beginnings of a future command officer here. Anton Yelchin continues to butcher the Russian accent here and likely gets the least amount of time to evolve Chekov. The real downer is that, like the first film, Simon Pegg has reduced Scotty to the comic relief. It’s a shame, because there’s truly wonderful humor in these characters and their relationships and reactions so that a designated comic part is totally unnecessary.

Good movies rely not only on great heroes but equally great villains. Benedict Cumberbatch has already shown great skills in his BBC Sherlock Holmes role. Here he gets to show his chops as one of Trekdom’s better bad guys. He’s the kind of character who can kill with a look. He’s a man with tremendous control over those around him. He’s used to being in charge. Cumberbatch portrays it all with minimalistic movement and speech. It’s the perfect example of less is more, if you make the most out of the less. Like many Trek baddies before him, he’s almost Shakespearean. Peter Weller adds to the mix with a man totally comfortable with his own sense of morality and patriotism. He’s a fanatic who doesn’t see himself as anything more than a pragmatist. It’s the most dangerous kind of villain there is, isn’t it?

Star Trek: Into Darkness is presented in an aspect ratio of 2.40:1. The Ultra high-definition image is arrived at by an HEVC codec. This is another case where reds benefit so much from 4K releases. The red forest in the opening sequence just explodes to life in this disc. Yellow is another big 4K boost, and in that same scene the costumes of the aliens just combine to make this a brilliantly colorful film. Of course, detail primarily in backgrounds blows away anything you saw on Blu-ray. You’ll be able to read fine print on controls. Contrast is quite nicely portrayed when you have a white starship against the blackness of space. The re-entry scenes are another portion of the film that just stands out from the HD release. Black levels offer perfect inky blackness with tremendous shadow definition. The ship uniforms offer some nice colorful moments as well. Finally, even JJ’s flair for camera flares provides some nice touches here.

The Dolby Atmos defaults to a 7.1 track that is much more aggressive than the first film in UHD 4K. The firefight at Starfleet HQ offers some sweet immersive surrounds that utilize all speakers. Subs offer pretty solid low end for explosions and ships speeding into warp. Dialog remains perfectly placed and crystal clear. There’s a nice low-end hum from the ship that is far more present than I ever noticed before.

I can’t say I’ll miss Abrams’ camera flares at all. But I will miss his touch. In any case, he’s left his mark on our Trek universe that will not soon be erased. Roddenberry always wanted us to have hope this may be one of the best UHD discs so far. “Have I got your attention now?”

Gino Sassani is a member of the Southeastern Film Critic's Association (SEFCA). He is a film and television critic based in Tampa, Florida. He's also the Senior Editor here at Upcomingdiscs. Gino started reviewing films in the early 1990's as a segment of his local television show Focus. He's an award-winning recording artist for Omega Records. Gino is currently working on his 8th album Merchants & Mercenaries. Gino took over Upcomingdiscs Dec 1, 2008. He works out of a home theater he calls The Reel World. Favorite films: The Godfather, The Godfather Part II, The Body Snatcher (Val Lewton film with Karloff and Lugosi, not the pod people film), Unforgiven, Gladiator, The Lion King, Jaws, Son Of Frankenstein, The Good, The Bad And The Ugly, and Monsters, Inc.
A War (Blu-ray) Sisters: Season 4