The Night Of (Blu-ray) 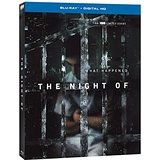 You know, I miss James Gandolfini. I know that HBO misses him as well. When The Sopranos finished, Gandolfini signed a development deal with HBO. He would not only work in front of the camera but help find and produce material for the network. We all know what happened next. Gandolfini passed suddenly, just when it seems he was breaking out of his Tony Soprano typecast, and one gets the feeling that he was going to do great things. One solid indication of that promise comes in the HBO series The Night Of… which was one of those passion projects that the man never got to see through. It’s one of the best things to come out of HBO in a few years, and that is saying something when you consider the strong programming that can be found there now. Game Of Thrones is a great show. The Night Of…, well… that’s something special all to its own.

It all starts out with our introduction to Nasir “Naz” Kahn, played by Riz Ahmed. He’s a straight-A college student from a solid working class Pakistani family. His family is Muslim and very conservative. He tutors basketball players but otherwise keeps to himself. He doesn’t date, do drugs, or pretty much anything else fun. That is until he’s invited to a team party and he wants to let loose just a little bit. He sneaks out of the house and borrows the taxi that his father owns with two other partners when he’s stood up by his friend for a ride. The problem is that he does not know how to turn off the “On Duty” sign, and a young, troubled girl gets into his back seat. Andrea, played by Sofia Black-D’Elia, strikes a chord with Naz, and instead of making her leave the cab he drives her around and finally takes her home. What starts as a bizarre encounter ends up changing his life forever. Naz wakes to find that Andrea has been murdered savagely in her bed. What he does next is begin a chain of events that will ultimately lead to him virtually framing himself for her murder.

The eight episodes are a very slow burn and likely not for everyone. We are taken on Naz’s journey through the system from the time of his arrest through his trial. I taught criminal law for several years, and I have to say I have not ever seen the process portrayed in such a painstakingly detailed way. The approach might appear to slow the pace of the narrative until you realize that it is the narrative. The series becomes a visceral experience that will find you there every step of the way. It’s hard not to take on some of the emotional weight that Naz must endure. It’s also impossible not to be effected by the way the character changes to meet the demands of his new reality. And that’s where the incredible cast comes in.

I have not seen Riz Ahmed before, at least that I can remember. If this performance is any indication, I’ll be seeing him again. He has the burden of carrying this story, but that’s not what impressed me the most. I was amazed at how well he tackled the evolution of this character. This is one of those people that you would not recognize as the same person when the series is finished. He manages to give pick up all of the necessary beats that make the transition at all credible. He’ll be a part of the upcoming Star Wars spin-off Rogue One.

One of the first people that Naz encounters is lawyer John Stone. Stone is played by John Turturro in his best performance to date. Thanks to some research by our own John Ceballos, I was able to catch a glimpse of James Gandolfini in the role that he intended to take on in the show. Did I mention I miss James Gandolfini? As much as I do, I can’t imagine anyone else playing this character but Turturro. Stone is a wonderful character study all by himself. He’s a “Better Call Saul” kind of guy who jumps on any drug or hooker case he can snatch. His slogan is “no fee until you’re free”, but of course, that’s not really the case. It’s $250 for him to show up. That’s cash. No credit cards or checks. He’s a lowlife lawyer with cirrhosis so bad that he can’t wear shoes. One of the show’s running gags is the number and types of remedies he tries in order to cure it. He figures it’s his lucky pay day when he happens to be at the station house the night they bring in a boy suspected of brutally stabbing a young woman. He inserts himself in the case, only to be disappointed that the family doesn’t have near the kind of money he was hoping to score. But something happens along the way. He begins to feel something for this kid, and no matter how hard he tries, he can’t seem to shake it. It’s a wonderfully written and portrayed character. The cherry on the top is the nuanced chemistry he has with Naz. You will find these two characters and the dynamic of their relationship compelling. This was one of those shows that was hard to stop watching.

I never get tired of watching Michael Kenneth Williams. From the moment he took the stand in The Wire to declare, “I steals from drug dealers” as Omar, he has delivered one incredible performance after another. There’s something captivating about every one of his characters, and Freddy Knight is no exception. Freddy is the inmate who pretty much runs the prison where Naz finds himself a fish out of water and in need of protection. Freddy provides it, but not for the reasons you might expect. Again the show and its characters break the mold. Freddy becomes a mentor to Naz, who slowly becomes his environment. I kind of almost envied Naz. Imagine that. I envied a guy in jail. It’s because Williams is so compelling. Williams usually plays dangerous and bad people, but you’ll find yourself wanting to be in their company.

There are other strong performances here. Bill Camp plays Detective Box, who ends up the lead detective on the case. He’s just about to retire, which appears to be a cliché in these shows, but there’s nothing tired or old in Camp’s performance. He doesn’t just go through the motions. He’s also not always completely tied to his own conclusions, and even as he does his best to nail the kid, the actor delivers enough body language to let us see the bouts of doubt he continues to have. It’s a real-person kind of performance that is usually lacking in a detective character. Life is seldom as black and white as a cop show usually pretends. Box becomes one of the most realistic cops you’ll find on television.

You’ll find more reality here than on any so-called reality show. This is one of those shows that you experience more than watch. They say you should always leave them wanting more. I want more.

Each episode is presented in its original broadcast aspect ratio of 1.78:1. The 1080p image is arrived at with an AVC MPEG-4 codec. The high-definition image presentation is quite unique. The style uses nuances of color correction to indicate places and moods, from deep, cold blue for police station and prison environments to a warm, yellow hue to the family home. There is certainly a gritty look to the image without compromising on the sharpness and detail. I got the feel of a 16mm film without the grain and with tons more resolution. Black levels deliver tons of atmosphere. Everything about the image is there to accentuate the visceral nature of the series.

The DTS-HD Master Audio 5.1 is not really going to blow you away with aggressive surrounds or even very deep subs. The audio presentation goes for a rather subtle but realistic look. Dialog is heavy here and given top priority. This is all about the characters and everything else, including the score, plays very low-key. It’s an appropriate approach and a clean clear audio presentation.

Sadly there are no extras.

I was expected the show to be more about how unfair our justice system is, particularly to minorities. I was pleasantly surprised to see that that wasn’t the case. While the show gives us a detailed enough tour to expose flaws in the system, it’s Naz who does more harm to his cause than anyone here. We meet prosecutors and a detective who do care about the truth in the end. While I am saddened that Gandolfini did not get to participate as much as he had planned, I enjoyed the show immensely. Rather than think of Gandolfini’s passing, I’d like to think of this series as a gift he left for us. “He wanted you to have it.”

Gino Sassani is a member of the Southeastern Film Critic's Association (SEFCA). He is a film and television critic based in Tampa, Florida. He's also the Senior Editor here at Upcomingdiscs. Gino started reviewing films in the early 1990's as a segment of his local television show Focus. He's an award-winning recording artist for Omega Records. Gino is currently working on his 8th album Merchants & Mercenaries. Gino took over Upcomingdiscs Dec 1, 2008. He works out of a home theater he calls The Reel World. Favorite films: The Godfather, The Godfather Part II, The Body Snatcher (Val Lewton film with Karloff and Lugosi, not the pod people film), Unforgiven, Gladiator, The Lion King, Jaws, Son Of Frankenstein, The Good, The Bad And The Ugly, and Monsters, Inc.
“31 Nights Of Terror” She Who Must Burn “31 Nights Of Terror” Waxwork/Waxwork II (Blu-ray)