Posted in: Disc Reviews by Brent Lorentson on October 22nd, 2016 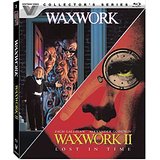 The third release of the Vestron Video Collector’s Series that Lionsgate has decided to put out isn’t just one film but two, Waxwork and its sequel Waxwork 2: Lost in Time.  If you think just because it’s a two-for-one release that they may have taken the lazy route on handling the transfers and features, well, I can happily say that you’d be wrong.  If you like campy horror, especially the kind that existed during the late 80’s on into the early 90’s, then this is the kind of double-feature set you’ll have a blast with.  It doesn’t hurt, either, that it’s being released just in time to be enjoyed for those of you looking to put together some horror movie marathons during the Halloween season.

A new wax museum is about to open up, and a group of teenagers decide to get together and check it out. Mark (Zach Galligan from Gremlins) is still recovering from a recent breakup with his girlfriend and decides to tag along with the gang in hopes of doing anything he can to win her back.  Don’t worry, this isn’t a film that wants to spend time following Mark around as he pines over his ex; instead, this is a movie that is all about having a good time.  As the friends snoop around the exhibits, one by one they begin to disappear, but whatever could be happening to these kids?

The first fifteen minutes of the film do play out more as a cheesy comedy, but don’t let that turn you off.  Once everyone gets inside the museum, this movie is all kinds of fun.  What makes this museum so special and unique is that once you pass the threshold of the exhibit, it sucks you into another place and time where you see the wax display come to life.  Each exhibit is like its own horror film, whether it’s involving werewolves or vampires and other familiar horror characters.

As the museum continues to claim his friends, Mark has no other option but to tell his crazy story to the police, but really, who’s going to believe that a madman running a wax museum is killing kids and using their corpses for display?  This is the kind of film that I think you could only have gotten away with making back in the 80’s.  It’s filled with gore and camp around every corner; despite paying homage to so many of the horror genres, what is most impressive is that Waxwork is definitely one of the more unique horror films of the decade.

There’s a B&W homage to Night of the Living Dead that is simply grin-inducing, but then there is the collective insanity of the final showdown in the museum that is silly but so much fun.  With fun appearances by John Rhys-Davies, and David Warner who puts in a fun performance as the caretaker of the museum, it’s the kind of film you’d imagine should have a larger cult fan base.

How does one follow up such a fun and unique horror film?  Well, for starters they ditch the entire wax museum and make it a time-travel film.  OK, if you’re reading this and scratching your head as well about them taking this route, you’re not alone.

One of the creatures from the museum has managed to survive the destruction and manages to follow it to Sarah’s home.  Sadly the role has been re-cast for this film, BUT Monika Schnarre steps into the role and definitely works not just as a replacement but manages to make some fun changes to the role.  She’s also tasked with a larger role in this film considering her character is being charged for the murder of her stepfather and is connected to over 200 other murders involving the wax museum. Mark has a plan, though, to save Sarah, and it comes in the form of a compass that allows them to step into a portal that takes them through time where they hope to find evidence that will clear Sarah of all charges.

This is a film that doesn’t just jump the shark; it barely resembles anything from the first film, and really to be fair shouldn’t have the Waxwork named attached to it.  That being said, this takes a step further into camp territory while we see Mark and Sarah slide into realms where they encounter aliens (basically a riff on Alien), then Mark investigates a haunted house, straight out of The Haunting, with Bruce Campbell making a fun appearance.

Despite all the fun cameos in this film, it just doesn’t hold up to the first film.  The decision to drift away from the horror and go a sillier route just wasn’t a choice that worked for me, though again as it slides from time to time and delves into other film references, it’s impressive how the film manages to adjust to the different styles.  At one point it seems to go from a Dawn of the Dead setting, to Jack the Ripper-era London, to slipping into a silent film classic.

As for the performances, you couldn’t get any more all over the map as Galligan manages to go more over the top, while Alexander Godunov delivers a fun, menacing performance as the film’s key villain.  The film’s tone seems to be all over the place as the film progresses; perhaps with a few drinks in me this would have been more fun.  It’s a film that does seem to be self-aware and seems to embrace the midnight movie camp appeal, though I would have been happier if it retained more of its horror elements and charm from the first film.

Waxwork and Waxwork 2 are presented in the aspect ratio 1.85:1.  The 1080p image is arrived at with an AVC MPEG-4 codec at an average of 26 mbps. When you consider the age of these films and keep in mind the idea of digital restoration didn’t exist yet, it’s kind of amazing how well these films have held up and were able to be restored.  There is still a bit of grain, but honestly this is something I don’t mind and takes me back to my days watching films on VHS.  The levels are fine for both black and white, though things do appear a bit soft in the daylight scenes. While it’s not perfect and crisp like the digital releases we see today, for a re-master of a VHS relic for many, I’m pretty happy to have a release looking this good with the color largely intact and scratches mostly nonexistent.

Both films come with a Dolby Audio 2.0 track. While this does feel a bit disappointing, if I’m not mistaken this might be how they were originally recorded.  I say this only because the films both seem to have the dialog equally balanced with the sound FX and score, so nothing seems to be lost in the viewing experience.  The score has some familiar classical beats as well as a fun electronic sound.

Audio Commentary with Writer/Director Anthony Hickox & Zach Galligan:  The two come together to do a commentary for both films.  Sure, there is some recycled information, but overall it’s kind of impressive how much they have to say about each film considering how much time has passed.

Audio Commentary with Composer Roger Bellon:  Not really a commentary, but an interview that plays as one of the audio tracks on Waxwork.  He discusses his career, and following the interview we get to hear the score of the film.

The Waxwork Chronicles (1hr 22 minutes) A six-part documentary with just about all the information you could hope to know about the two films.  Filled with interviews and behind-the-scenes footage, we also get a very good look at the effects that went into the film.  This is one of my favorite special features of the year.

I love what Lionsgate has done with the Vestron Video Collection. This is the ultimate throwback to my days growing up and hitting the mom-and-pop video store.  I’ve seen Waxwork several times over the course of my life, and each viewing I seem to appreciate different things, but I’ve always had fun with it.  If you’re looking for a good time and want to travel back to the 80’s, Waxwork is a great late-night movie to share with friends over a couple of drinks and popcorn. And you basically get the sequel for free; this is a steal.

Brent Lorentson is a horror writer and film critic based out of Tampa, Florida. With a BA in Digital Film, he co-wrote and co-directed Scavenger Hunt. His short stories have appeared in various horror anthologies. In 2019 his short script Fertile Blood will be a part of the anthology horror film Slumber Party. He is currently working on his first novel A Dark and Secret Place set to be released in late 2019. Favorite Films: Taxi Driver, Fight Club, I Saw the Devil, The Wild Bunch, Dawn of the Dead, A Clockwork Orange, Pulp Fiction, Heathers, The Monster Squad, and High Fidelity.
The Night Of (Blu-ray) “31 Nights of Terror” Lights Out (Blu-ray)