Lord of the Rings: The Two Towers – Extended Edition

Posted in: Disc Reviews by Archive Authors on November 22nd, 2003 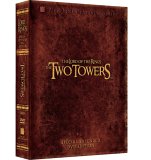 Who wants to see the middle of a movie, anyway? The beginning of the movie introduces the characters and presents the conflict. The ending holds the resolution and the conclusion. But the middle? Who wants to just see the middle? Nobody comes late and leaves early at the Cineplex. Nobody sane, anyway. This is not just any film, though. This is an Epic. Literally everything about this production is huge. The original text of the story was actually so long that it had to be divided into three volumes. The companion fil… is equally as massive. It also covers three volumes, with each volume clocking in at a length much longer than most rational people are willing to tolerate.

Yes, this is a film of Epic proportions, and the Extended Edition DVD is no different. Over 43 minutes of extra footage has been added to The Lord of the Rings – The Two Towers, bringing the total run time to 3 hours, 43 minutes. It’s not just filler footage, either. Over 200 new digital effects were created for the DVD release; more than most films have in their original theatrical versions. The added material helps the film instead of hurting it, providing more room to develop characters and plot lines. In this case, more is more.

However, be forewarned; this is not a set for the faint of heart. For those that fear the size of this film, the two-disc theatrical version is available for rental. You should check it out, instead. This one is probably not for you.

No, this is a DVD set for the bold. For those undaunted by the thought of a film that spans two discs. Those who are unafraid of four feature-length commentaries, over 1800 images, and hours upon hours of documentary footage. Those who stand tall in the face of interactive maps and Easter Eggs. Yes, this is for you. This is your quest. Accept it boldly, and view it with an undaunted heart. Witness the majesty of The Two Towers – Extended Edition on DVD.

An Epic film calls for an Epic soundtrack. New Line has provided us with two; Dolby Digital 5.1 EX, and DTS 6.1 ES. Both are fine choices that really go above and beyond the call of duty, making this film sound simply amazing. The clarity that they deliver is unmatched. Every flying arrow, every falling raindrop, every string on every violin can be heard individually. One of the great benefits of spreading the film over multiple discs is that there is more room available for a quality audio track (or two). Lucky for us, this is an opportunity that was exploited to the fullest.

The DTS track is my personal favorite. Sound comes from all sides throughout the film, surrounding the viewer in rich environments, and making speaker locations virtually disappear. Bass hits hard throughout the film, adding a feeling of realism seldom equaled. Dialog is anchored to the center channel, yet free to naturally roam away when the action demands it. This is an amazing soundtrack… one of the best that I have ever heard.

The Dolby Digital track is nothing to ignore, either. While not as loud as the DTS track, it does a better job of blending the audio across the front speakers, making for seamless imaging as objects move horizontally across the front-of-house. While the DTS track is more honestly realistic, the Dolby track has all of the rough edges smoothed off, resulting in a track that is a bit more pleasing to the ear.

It’s really just a matter of preference. Both tracks are reference quality. While the DTS track packs more of a punch, the Dolby tack is more sonically beautiful. Viewers can’t possibly make a bad choice between these two wonderful soundtrack options.

As much care was taken with the video quality on this title as was taken with the audio. A film as large as this one carries some hefty visuals with it, and the viewer is able to see them all here. The Widescreen transfer is near perfection, with clarity and detail being the order of the day. Each Orc in the army has distinct movements and characteristics that can be spotted easily. Landscapes miles away can be seen in great detail. Blacks are deep, and flesh tones are perfect.

One scene early in the film showcases just how fantastic the transfer quality is. Aragorn is tracking the movements of Merry and Pippen, and as he does, viewers are rapidly taken on a flashback ride back and forth from Aragorn’s daytime tracking to the Hobbit’s nighttime escape. These rapid changes in brightness are handled to perfection, with no bleed over apparent at any point during the scene.

Some special mention has to be made with regards to the character of Gollum. To put it succinctly, he looks unbelievable. The detail that has gone into this character is unparalleled. With regards to the transfer, the digital grading department deserves a big pat on the back for making him fit seamlessly into his scenes. Many CG characters seem to lie over the top of their backgrounds, but Gollum has depth. He is affected by shadows and light, and it is often easy to forget that he is not actually there. Simply amazing.

The only faults that I could find with the transfer are very minor. This is a film that was created for the big screen, and for the most part, it translates well to the small screen. The only problem with this minimization process that I noticed comes in the form of dwarf-sized subtitles. While they are certainly legible, I would have liked to have seen them a tad larger. This is not a major issue, but just a minor detail. Also, there is some streaking when white words appear on a black background. This is most noticeable on the menus at the end of disc one and the beginning of disc two. Again, these are certainly not major problems, but they can be slightly distracting.

These two very minor issues aside, this is an excellent transfer that really does the film justice.

As would be expected, the special features included with this title live up to the Epic scale that Peter Jackson has set for his production. Hours upon hours can be spent pouring over these fascinating and thorough extras. Where one title might have a 10-minute segment covering the locations, this one has a 45-minute segment. Likewise, there’s not just one commentary, there are four. Here is a more detailed look at what viewers will find:

This disc opens with a brief Introduction by Peter Jackson himself. While this sounds like a filler piece, it is actually quite helpful to hear what kind of information is included on the disc, as well as getting a brief tour of the menu options. This is one of those special little extras that really places this set at the head of the class. Once viewers have heard the words of Mr. Jackson, they can really get in to the meat of the extras.

As if all of this wasn’t more than enough to keep the average viewer busy for a week, there is still a whole second disc worth of extras to come!

Disc Four follows the same format that is laid out in disc three. The first option is a brief Introduction from Elijah Wood. While this one isn’t quite as informative as Peter Jackson’s, it makes up for it with humor. Again, this is just one more extra that makes this title truly something special. Now that we are re-oriented, let’s move on to the good stuff…

So there you have it. Over six hours of special features, not including the 15+ hours of commentary. Once I had finished watching all of this special footage, I felt like I had been there for the entire shooting of the film myself. This is as good as special features can get.

What more could possibly be said about this fantastic title from New Line? The hype about the film is justified. The book is a classic, and now so is the film. No expense was spared to bring this tale to life in breathtaking detail, no corners were cut, and for that I am thankful. Now viewers everywhere can enjoy the film in a special extended version, with more extras than even Gandolf himself could have created. This is a must-have title for all true DVD Fanatics.