Posted in: Disc Reviews by Gino Sassani on October 23rd, 2005

Val Lewton produced 9 horror films for RKO back in the 1940’s. His films did not rely on terrible monsters or horrific images. Lewton was a master at atmosphere. Unfortunately these films have mostly been forgotten over the years, The Cat People being perhaps the most recognizable title in the collection. Sadly, this might be more for the lackluster remake in the 1980’s. Truth be told, these films are not really horror films in the usual sense of the genre. In most cases the evil is the product of an all too human hand rather than anything supernatural or fantastic. Not surprisingly Boris Karloff stars in the three best of the films including The Body Snatcher, one of the best horror films ever made. Please don’t confuse the title with the Invasion of the Body Snatchers.

Lewton’s films were all about mood and ambience. Violence more often than not occurs off-screen and portrayed as shadows, allowing the audience to imagine frights far more fantastic than could be placed before our eyes. Lewton’s productions were budget affairs but had comparable quality to the higher cost features that the big studios, most notably Universal, were creating at the time. This collection brings together all 9 films on 5 DVD’s…

“The Cat People”: Irena (Simon) is about to marry, but is convinced that the moment she sleeps with her husband she is doomed to become a dangerous cat and consume her lover.

“Curse Of The Cat People” Amy (Carter) is the daughter of the first film’s Reed. She is having visions of Irena and fears of suffering the fate of the family curse as well. Robert Wise, who would go on to direct such classic films like The Day The Earth Stood Still and West Side Story, began his career by stepping in and saving this languishing production.

“I Walked With A Zombie” Betsy Connell (Dee) travels to the West Indies to nurse Jessica (Gordon) from a mysterious illness. Perhaps the illness is the result of a Voodoo curse and so she sets off to find the “cure”.

“The Body Snatcher” Dr. McFarlane (Daniel) is haunted by John Gray (Karloff). Gray is a cabbie by day and grave robber by night. Associated with the executed participants of the Burke and Hare scandals, the good doctor’s fear keeps him in the grips of Gray and his wishes.

“Isle of the Dead” Gen Pherides (Karloff) must quarantine himself and the soldiers and peasants who inhabit an island believed contaminated by the Plague. Stories of a local vampire legend and the mysterious deaths of the inhabitants pressure the General to release his firm grip on the island.

“Bedlam” George Sims (Karloff) runs the local St. Mary’s asylum for the mentally disturbed. When Nell Bowan (Lee) protests the cruel treatment of the inmates, she finds herself in the clutches of the mad Sims.

“The Leopard Man” When a local celebrity uses a live leopard as a publicity stunt things go horribly wrong. The cat escapes and is now perhaps responsible for a gruesome string of deaths in the poor Spanish villa.

“The Ghost Ship” 3rd Officer Merriam (Wade) runs afoul of the tyrannical Captain Stone (Dix). Can he get anyone to believe the captain is mad?

“The 7th Victim” Mary Gibson (Hunter) has lost touch with her sister and begins to worry. She makes the journey to New York in search of her. It seems her sister might have been taken by a local cult that is feared by an entire community. Six people have died thus far… 7th anyone?

Each of the films is presented in a disappointing Dolby Digital Mono single track audio. I was hoping for at least a 2.0 mono reproduction. It actually sounds fine on an older TV speaker but is very inadequate when played on a good sound system. There isn’t much range and a few of the features contain a bit of high end distortion. The laser disc version of at least a couple of these films was far superior.

Each of the films is black and white as well as 1.33:1 full frame. This should all be expected. These were the films’ original presentations. Here the discs are better than the Image lasers I have of at least 2 of the films. Some effort to clean the prints is evident, although no actual restoration seems to have been done. Contrast is quite nice, as are most black levels. Expect a few specks and print marks. Some of the films are better than others.

Disc 5 contains a tribute to Val Lewton. Using plenty of stills and clips from the films to tell the story, this feature tells you more about Val Lewton than you could possibly want to know. There are some nice interview clips. There is entirely too much footage from the films, however. If you haven’t yet seen the films, the footage contains plenty of giveaways. If you have watched the films, all this footage takes on a “been there done that” feel.

Far better than the feature are the commentaries offered on all but “Isle Of The Dead” Most of the tracks are the elitist sounding film historians who treat you like you can’t figure out anything about what you’re seeing. The Robert Wise audio is by far the most useful.

I had the pleasure of meeting Robert Wise about 10 years ago while working for a horror convention. We spent quite a bit of time talking about The Body Snatcher. While I know many of his other works are better known, I had three reasons for utilizing this precious time on a so little known film.

1. I’m sure he was far more fatigued about questions on his famous works.
2. There was already considerably more written on those subjects
3. It happens to be one of my favorite films of all time.

He was very generous with his remembrances. I wish that I had the space to recall them for you now. I will say he had great praise for Karloff, who he described as one of the most patient actors he had ever known. He claimed Lugosi had been quite ill at the time and Karloff was incredibly giving to his rival and co-star. Much has also been made that Karloff and Lugosi hated each other. Wise confirms that he never saw anything but mutual respect and admiration between the two stars. You can pick up each of these 5 discs separately, but seriously, why would you. You’ll buy the entire collection. Why? “Because I wish it, that’s why.” 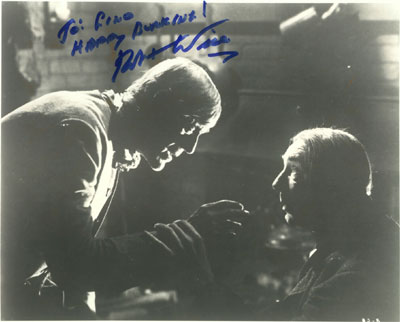 Gino Sassani is a member of the Southeastern Film Critic's Association (SEFCA). He is a film and television critic based in Tampa, Florida. He's also the Senior Editor here at Upcomingdiscs. Gino started reviewing films in the early 1990's as a segment of his local television show Focus. He's an award-winning recording artist for Omega Records. Gino is currently working on his 8th album Merchants & Mercenaries. Gino took over Upcomingdiscs Dec 1, 2008. He works out of a home theater he calls The Reel World. Favorite films: The Godfather, The Godfather Part II, The Body Snatcher (Val Lewton film with Karloff and Lugosi, not the pod people film), Unforgiven, Gladiator, The Lion King, Jaws, Son Of Frankenstein, The Good, The Bad And The Ugly, and Monsters, Inc.
Bewitched Liberated Zone