Posted in: Disc Reviews by Archive Authors on July 4th, 2008 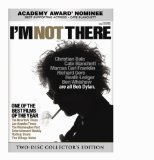 Todd Haynes continues to dazzle and amaze with his body of work. In Velvet Goldmine, he told the story of a fictitious glam-rock band in David Bowie/Ziggy Stardust style. Far From Heaven found him taking the Douglas Sirk films of the ‘50s into a nontraditional turn. In his follow-up film I’m Not There, his first directorial effect in five years, Haynes examines the persona and essence of Bob Dylan without actually really using the name or the words together at all in the film in a film released in 2007, where features like No Country For Old Men and There Will Be Blood earned a slew of awards, I’m Not There was an understated gem, and yet summing it up is a little difficult.

First off, while I’m Not There is a film inspired by the life of Bob Dylan, semantically it’s not a biopic. It examines the more notable images created by Dylan; one of the adolescent who portrayed himself to be the poor white kid who liked the work of Woody Guthrie and who, ironically enough, is named Woody (Marcus Carl Franklin, Be Kind Rewind). Arthur Rimbaud (Ben Whishaw, Layer Cake) is the mid-‘60s Dylan and de facto narrator whose words appear to be lifted from magazine articles of the era; Jack Rollins (Christian Bale, Batman Begins) is the folk hero and later born-again Christian-era Dylan; ironically Rollins is played by Robbie Clark (Heath Ledger, Brokeback Mountain), who watches his marriage deteriorate while he deals with the period of fame he has wrought; and Cate Blanchett (Elizabeth) plays the electric Dylan, touring in England, addicted to pills and alienating his acoustic fans. In his later years, Billy the Kid (Richard Gere, Pretty Woman) plays Dylan as the aging anonymous hero in the west, which in a way Dylan seems to want to do in reality. While none of these interpretations can be claimed to be accurate, they are, as Haynes says, fleeting glimpses of the image that Dylan created for himself. Using surrealistic and style choices influenced by Fellini and Goddard, Haynes helps make the worlds of Dylan all the more emotionally affecting.

It helps that the music, a mix of Dylan originals and imaginative covers, is memorable. Ranging from Sonic Youth to Yo La Tengo to a whole host of others, they breathe new life into the musical library of this legend. My knowledge of and interest in Dylan’s music is pretty topical, yet there was a version of a forgotten Dylan song named “Goin’ to Acapulco” that floored me. Haunting and melodic, providing a sad melancholy on a scene with Gere’s character, that’s the type of performance that will stay with you for awhile. Haynes’ familiarity with the material and its creator help give you a newfound appreciation for this musical legend.

Performance-wise, there’s not a bad note in the bunch. The closest thing you could make a case for is Whishaw, but he’s not in the movie enough to complain about, and his role is quite good. On the surface, casting a young African American boy and an Australian mother in essentially the same role could be for stunt’s sake, but it all works tremendously. Besides, when you’re talking about a kid who grew up in upper-middle class Minnesota who went on to become a folk hero and voice for the generation, the whole idea of misconception is practically born and bred. Of particular note is Ledger’s performance. Especially heartbreaking in the way of real-life events since the film was released, watching him ache and pain his way through Clark is foresight, especially when you consider that the mother of his child, Michelle Williams (Dick) plays a supporting role next to the Blanchett version of Dylan. But ultimately, both the cast and director have a vested interest in humanizing a lot of myths, and they seem to do it rather successfully.

Dolby Digital 5.1 surround here, and really the star of the film is the music, which sounds crisp and clear, possessing a nice dynamic range without a lot of subwoofer activity to speak of.
Dialogue is clear and the overall soundtrack is subtle and immersive, and it’s a pleasurable experience.

Presented in 2.35:1 anamorphic widescreen, this is Haynes’ first outing using the Scope format, and the film looks great. It uses black and white, which looks natural and grainy, and uses color like greens and yellows that look so good they had to have been processed somehow. The scenes with the “Billy the Kid” persona look almost rustic as well. Overall, the film looks awesome.

A much more loaded two-disc set full of goodies that I wasn’t expecting. First off, Haynes provides a commentary for the feature. He usually comes prepared for the dance and this track is a goodie, as he discusses his inspiration for the movie and context of certain scenes and characters in Dylan’s life. He examines shots from time to time and provides breakdowns when he has a moment and discusses the intent of most scenes and the story as a whole. Production challenges are discussed along with his influences in the film. He talks about working with Ledger and provides thoughts on the cast as well and recites thoughts on the film from critics’ articles. Overall, this is an excellent track. From there, along with a scene selection option, you can select scenes by song, and there’s a subtitled option by lyric to boot. Introductions to the film are included from some Dylan historians and film critics on the disc, and they discuss how the film plays out.

Disc two starts with a trailer gallery, which include two theatrical trailers and a series of trailers, done either by character or as a mix, where they hold up flashcards, similar to Dylan’s “Subterranean Homesick Blues,” in a clever nod further to the icon. “From the Edit Room” is a selection of additional footage, starting first with five minutes of audition footage from Franklin and Whishaw. Two deleted scenes are next, but they’re forgettable, and the alternate/extended takes are pretty much full-blown musical sequences, which are all pretty cool. Four minutes of outtakes follow which aren’t too bad, and a poignant three-minute tribute to Ledger closes the section out. “A Look Back” examines the film from a retrospective standpoint of sorts, starting with three minutes of interviews from the Red Carpet premiere in New York. A 20-minute look at the soundtrack’s creation is next, with thoughts from Haynes and others who contributed to the soundtrack, and some of the more memorable songs are discussed. It’s an interesting piece and, considering the nature of the material is almost essential. Haynes provides a conversation that comes from several interview sources and lasts over 40 minutes. Some of the things he discusses are redundant from the commentary, but he also talks about working with the cast a little more, along with how the source material got to Dylan, both of which are interesting and funny stories to enjoy. A series of various stills galleries which include production shots, more essays and Haynes’ proposal treatment to Dylan complete the set.

To paraphrase Roger Ebert, he says that the visuals are great and that you’ll not know any more about Dylan going out than you did coming in. Having said that, and knowing that Dylan’s contributions to the film are little more than musical, I still think that Haynes managed to debunk a few myths, and perhaps even humanize the voice that people try to find out more from. Ultimately, even if you find an emotional joy in his work like I did, all should be forgiven. With an excellent technical presentation and loaded supplements, this one’s a keeper.

Dare to Play the Game Panic in the Streets (and Hallways Too, For That Matter)