Posted in: Disc Reviews by Michael Durr on March 2nd, 2009

Autism is commonly defined as a brain development disorder characterized by impaired social interaction and communication, and by restricted and repetitive behavior. Sometimes, due to that lack of social interaction and repetitive behavior, the people affected develop a special skill or heightened senses. The results can be amazing. However, in film, autism is rarely shown as what it truly is, a disorder. To find a film that not only embraces the special skill as well as show the difficulty it takes to exist and function normally is pretty rare.

Zin (played by Ammara Siripong) is involved with Yakuza Boss Masashi (played by Hiroshi Abe). There is just one problem with that. She was previously the girlfriend of a gangster simply known as No. 8 (played by Pongpat Wachirabunjong). No. 8 in his own jealous rage decided to shoot his own toe and forbid Zin from ever seeing Masashi again. She decides to flee and tells Masashi to not follow.

Soon thereafter, Zin realizes she is pregnant with child. She ends up having a daughter named Zen. The child is different though and suffers from Autism and will need special care. One day, Zin breaks down and writes Masashi about their daughter. No. 8 finds out and soon pays the mother and her child a visit. He responds by cutting off one of Zin’s toes as reminder that she is not to see Masashi. After the encounter, Zin is forced to move again.

They move next to a Muay Thai academy where Zen starts to watch the boxers as well as martial art films on television. She starts to mimic the moves and actions she sees as she learns at an astonishing rate. She befriends a small orphan boy named Moom (played by Taphon Phopwandee) as the mother takes him in. It is at this time that Zin is diagnosed with cancer and falls ill.

Zen (now played by Yanin “Jeeja” Vismistananda) and Moom try to make some money to pay for Zin’s treatments by performing street tricks. Due to Zen’s heightened senses, she is able to catch balls thrown from all directions. However, the duo soon finds out that this is not enough to keep up with the expenses. They come upon an old journal which lists out debtors to their mom from her time as a loanshark under No. 8. They decide to collect.

The task starts out as simple as asking for the money. That does not work. Zen soon takes it on herself to collect the money in another fashion. Zen uses the moves and actions she sees on television and at the academy against her foes. This leads to a series of encounters with the criminal underbelly which includes No. 8 himself. Can Zen collect enough money to keep up with her mother’s treatments and can one girl defeat a cartel of gangsters sought on keeping their money?

After seeing so many movies & dvds in my life, it is rare that my jaw literally drops to the floor when seeing an action movie. It is exceedingly rare that the story also grips me enough to want to see the next scene. Yanin is impressive. Her wide display of kicks and moves is right up there with pros such as Tony Yaa or Jackie Chan. In her first few fights, she is clearly channeling Bruce Lee with an assortment of showy moves and spirited yells. Her acting is also very believable; she clearly is still developing but shows signs of having a natural knack for showing true emotion on-screen.

The rest of the cast is also well-talented and up to the challenge of providing adequate fodder for Yanin to work with. It was honestly hard to find a true problem with this movie. The only thing I could find was that they never came out and said Zin had cancer or Zen had autism. They listed both just as some sort of special condition. Other plot points had to also be figured out on the fly. However, I am going to attribute this more to the subtitles than the actual movie as I will explain later.

The dvd is presented in 1.78:1 Anamorphic Widescreen. The film has a ton of action scenes, so it is important that the brights and the darks show up as vibrant as can be. It provides a satisfactory job with good color throughout the 92 minutes. For the most part, this does the duty and keeps you wanting more.

The audio is in Thai & English Dolby Digital 5.1 (2.0 mix for each language also included). The dub is okay but the best audio is clearly the Thai 5.1 mix and turn on those subtitles. The action does use the surrounds decently and keeps the dialog clear and in the center channel. The subtitles are in English and Spanish. This is where the true problem lies. I don’t know Thai but the English subs seem to leave a lot of details out. I figured out the movie pretty well and was able to deeply enjoy it. But for the first 15 minutes, I had to fiddle with the audio and subtitles portion quite a bit to get the story across. If this ever comes up for a Dragon Dynasty special edition, I would do what I can to clean that up immediately.

Most of us males like a good & hard fight film. Even a few females such as my girlfriend can enjoy it on occasion. However, what keeps us going and interested in the film is a good story, wondering what comes next and how they get there. Chocolate does this with good storytelling and a healthy dose of amazing moves and wire tricks to keep us on our toes. The nice thing about the wire tricks? They still look believable. The video is certainly sufficient and the only weak part in the film is the audio and the lack of extras. I can easily recommend the film and suggest anybody who doesn’t mind action to enjoy the fare here. My only hope after the film is that we see Yanin in future productions, ones that can show off her fancy feet and her developing acting skills. 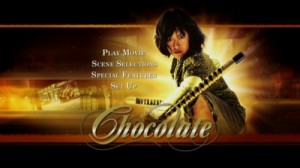 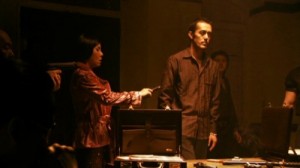 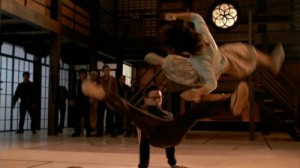 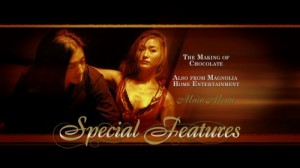 Michael Durr has been reviewing movies for the better part of fifteen years now. He primarily enjoys thrillers, sci-fi, animation and even a little courtroom drama. His favorite films include Escape from New York, the Goonies and anything with Alyssa Milano. When he’s not praising Kurt Russell as the greatest actor of our time or scratching his head over a David Lynch flick, he’s spending time at home in Texas with his lovely wife, Lori and his amazing son. How they put up with him is a mystery, but even Basil Rathbone doesn’t have the time to solve that one.
See? It Can Be Done Right! French Connection 2 (Blu-ray)