Posted in: Disc Reviews by Michael Durr on October 30th, 2009

It is true, I’m not a big fan of lawyer shows. A long time ago when I was about twelve years old, my future vocation wish was to become a lawyer. I visited lawyers, I talked to them for what seemed like hours. Except it wasn’t hours at all, it was more like thirty minutes. My realization then was that I wasn’t cut out for the business and went into what I do now. However, after watching Ally McBeal for a season of episodes, I come to the realization that I’m so very glad that I didn’t stick around.

Ally McBeal (played by Calista Flockhart) has just lost her job at her law firm. It seems that a co-worker decided to touch her rear in an unprofessional manner. The co-worker decided to say it was OCD and unfortunately Ally found herself on the streets. She is immediately picked up by an old colleague of hers named Richard Fish (played by Greg Germann) and invited to work at his firm.

After thinking it over briefly, she decides to accept. She accepts because one, they are willing to give a raise and two, they are willing to help her with the sexual harassment suit. However, accepting a job at the firm of Cage & Fish doesn’t come without some baggage. It all centers around the fact that the characters at the firm all have their little quirks or personal history with Ally.

Let’s see, there is her roommate Rennee Raddick (played by Lisa Nicole Carson) who is a district attorney. Then, Ally has a secretary and her name is Elaine Vassal (played by Jane Krakowski) who is very eccentric and must be in the middle of all the gossip. *SNAPPISH* Oh, hi there Elaine, I was just introducing your character. *May I embellish?* Well I suppose, but don’t draw it out too long. *I’m the center of the office, a friend in need and the glue that holds the office together, I…* Alright, that’s probably enough. *Character description SNAPPISH*

There is also John Cage (played by Peter MacNicol), the other partner in the firm. He is an eccentric as well, but his odd style often wins him more cases than he loses. But perhaps the most personal to Ally is the fact that Billy Thomas (played by Gil Bellows) is also in the firm. *Oooooh, gossip* Elaine…would you please? *Sorrry* It’s alright, Billy just so happens to be Ally’s high school, college sweetheart. The only reason they separated was that Billy decided to transfer to a different school for a better opportunity.

This would be okay except that he is now married to Georgia Thomas (played by Courtney Thorne-Smith). *Drama* Furthermore, Georgia joins the firm after about 1/4 through the season. *Even more drama* Do you always do that? Stir the pot? *Well yes, I suppose…it keeps things interesting* I see. These characters along with Ally’s overrun imagination and insecurities make for a usually chaotic work environment.

Each episode also tends to follow the same formula. We have the beginning where a quirky thing happens to Ally where she spazzes out & usually has one of her moments where she envisions something completely off the wall. *She usually has tension with Billy too, I know, I’m in the stall when it happens* Did I forget to mention that the firm has an unisex bathroom? Anyhow, they usually introduce a case or two as Ally agonizes over her problem. Cue problem thinking music sung by Vonda Shepard.

Then Ally usually sings out her problem or heart to Billy who gives her advice. Georgia either is helping Ally or wondering why Billy is spending more time with Ally than with her. Ally somehow wins the case and solves her problem temporarily until the next one comes. We usually get a Fishism somewhere in there that involves piles of cash or women. Then cue the wrap up song from Vonda and enjoy the dancing twins (played by Eric & Steve Cohen).

*Did you mention that I usually am the center of any information that comes into the firm?* If that’s a fancy way of saying you gossip, then yes; yes you do. *Synonym Snappish* Here is the thing about I show. I actually like it. Except for one thing. *Yes?* Ally McBeal. I can’t stand the fruitcake. *She’s two-thirds of a Rice Krispie treat. She’s already snapped, and crackled, and she’s ready for the final pop* That too.

I absolutely adore some of the characters. John Cage or the Biscuit is a riot with his mannerisms and how he wins cases. Billy and Richard are interesting characters, even Georgia has moments of greatness. *clear throat* And as you can already tell, I do have an affection of Elaine’s role on the show. *Thank you* You’re welcome. But the more I see Calista Flockhart on the screen, the more I want to turn the show off. Is that wrong to like everybody else on the show but absolutely could do without the lead character?

The video is shown in good ole 1.33:1 fullscreen. They didn’t use widescreen in network shows back then which is unfortunate. The show hasn’t aged particularly well either. Grain is frequent and the colors are for the most part fairly average. It will certain do for most viewers and even fans of the show. It just seems at time that the show is about five years older than it actually is.

The show is represented in 2.0 English, Spanish or French Dolby Digital. The dialog is firmly in the center channel, it’s clear, it’s serviceable. For some of the special effects, it doesn’t really grab you, its kinda haha, okay let’s move on. It simply seems that Fox took the video & the audio and put it on a disc without any restoration. Subtitles are provided in English & Spanish.

Truth be told, I had watched Ally McBeal about half a dozen times during its one hundred episode run. I wasn’t particularly happy when I first heard I was getting the first season to review. I knew my problem with the show, but I gave it a honest second try. I still don’t care for the Ally McBeal character. She’s absolutely bonkers and at times I’m not exactly sure how she doesn’t get disbarred. It’s not that she’s unethical with all due respect, she just comes across such like a little prissy b….*that was with all due respect?*. Sorry Elaine. The show is fairly entertaining elsewise and I’m sure plenty of fans are looking into at least the first season set. The video & audio are okay but there are no extras at all. Fans, you know who you are…go get em. As for me? Well Elaine & myself are going down the street to listen to the stylings of Vonda Shepard and share a dance. *Watch the hands, sir, *hair flip** Oh I will *knowing wink at the crowd* Cue the dancing twins.

One Hundred Tears Away
The Promise
The Attitude
Drawing the Lines

The Dirty Joke
Boy to the World
Silver Bells
Cro-Magnon

The Blame Game
Body Language
Once in a Lifetime
Forbidden Fruits

Being There
Alone Again
These Are the Days 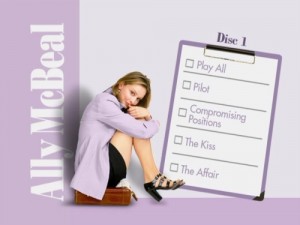 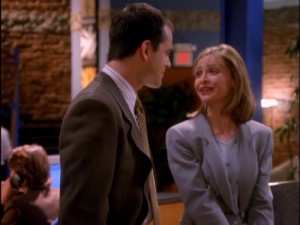 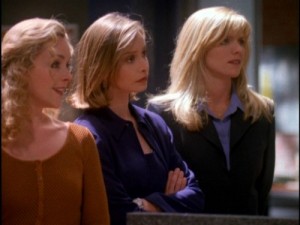 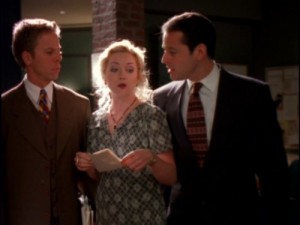 Michael Durr has been reviewing movies for the better part of fifteen years now. He primarily enjoys thrillers, sci-fi, animation and even a little courtroom drama. His favorite films include Escape from New York, the Goonies and anything with Alyssa Milano. When he’s not praising Kurt Russell as the greatest actor of our time or scratching his head over a David Lynch flick, he’s spending time at home in Texas with his lovely wife, Lori and his amazing son. How they put up with him is a mystery, but even Basil Rathbone doesn’t have the time to solve that one.
“31 Nights Of Terror” Tales from the Darkside: The Second Season “31 Nights of Terror” – Rec