Posted in: Disc Reviews by William O'Donnell on April 30th, 2010 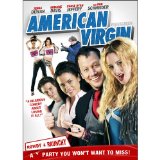 A young girl, who is obsessed with purity, appears on a “Chicks Go Crazy” video (a parody of Girls Gone Wild) and gets a group of rowdy (by comparison to her) friends to go on a road trip to track down the dvd and its maker (played by an easy paycheck receiving Rob Schneider), all the while resisting the temptations of drinking and sex.

So the plot is borderline identical to Road Trip, except this time it’s a journey for the preservation of one’s self image and not a relationship, and many of the standard teen college movie staples are here: A fish out of water goes to a new school (see Legally Blonde etc.) and is living alongside the wildest person on campus (see Son in Law etc.) when there is a frat party where things go too far (see every college teen movie ever made) and she gets drunk and does something lurid on video (and we’re back to Road Trip).

The subplots regarding her male friends and their relationship troubles always stop the movie dead in its tracks and offer nothing, the messages that are made about choosing what to do with ones own body get a bit muddled up. On the brighter side, every moment with Rob Schneider and the “Chicks Go Crazy” crew are amusing enough, especially Schneider’s shtick about giving sound advice regarding student’s choices in majors and courses before asking them to get naked and make out, as well as these DVD covers that set a chapter marker for each section of the film and give a percentage update of how pure our hero is as the movie keeps progressing (starting at 100% and slowly plummeting to 0%).

The performances are all acceptable, which help make the jokes work when they need a little help, and the material can be funny enough to maintain interest in this over saturated sub-genre of films, but all in all it does not rank high in this group and can be easily forgotten.

Widescreen 1.78:1. The footage is a bit grainier than it should be but its not horrible. Like the film, there’s just not a whole lot to say.

Dolby Digital 5.1 Surround in English or French. Things are balanced well enough in all the speakers and the music does not overpower the dialogue despite the many party scenes. My one issue is the dubbed in dialogue can be a pinch obvious at times, which has always been a pet peeve of mine.

Clearly the title wants to ensure it is shelved right next to the American Pie series, but it is just not as interesting as those films (well, compared to the first two at least). I say, if this film happens to be on TV or something, and you don’t have anything better to do with your hour and a half, you could do worse by watching it, but in the end there is little special about it.

Ripley’s Believe it or Not Tenure