Most of my growing up and living occurred in the 1980’s. From ages five to fifteen, I grew up in an era that was famous to many different types of cartoons. It helped to shape my personality, from bad jokes to that unmistakable sarcasm. So, it was easy to attract me to a cartoon set that showcased odds and ends from that familiar era. Join me as we take a step back in history, a history that hits very close to home.

The first toon we find is one called Goldie Gold & Action Jack. They fight by air, by sea and by the seat of their pants. They aren’t kidding. Goldie is a certified lunatic: she rides a helicopter indoors, jumps out windows and talks to hobos. Doesn’t she know that she is blonde and rich? Jack really isn’t all that Action, he’s just good at being lucky. The show is very gadget heavy and has a little Scooby Doo sleuthing thrown in.

Next, we have Chuck Norris and the Karate Commandos. He’s a man of action and he is joined by Pepper, Too Much, Kimo the Samurai, Reed the apprentice, and Tabe the Sumo wrestler. They take on the Claw and Super Ninja. Lots of fights here but the way the Commandos dodge bullets is laughable. Best part is the moral lesson at the beginning and end of the episode hosted by the real Chuck Norris. Somehow he manages to keep a straight face by talking about a “Deadly Dolphin”.

Then we have the Completely Mental Misadventures of Ed Grimley. Ed Grimley was a SCTV bit which eventually moved on to SNL (and got its own animated show). There are a couple of adult jokes thrown in early but they aren’t racy at all. The show is pretty bad, but the best part isn’t Ed Grimley. It’s the shorts they mix in. One features The Amazing Gustav Brothers, Roger & Emil who gives us a brief science lesson.

But the best part of all has to be the live action short called Count Floyd’s Scary Stories. For those who don’t know, Count Floyd is played by Joe Flaherty, also of SCTV fame. He plays possibly the worst vampire known to man. The shtick is that he is doing a kid’s show and tells scary stories. The bad puns are a plenty here, but it will make you run out and do your best Count Floyd impression to make sure that your loving spouse rolls their eyes in appreciation.

Flintstone Kids is up next. It is broken up into four parts covering a whole hour of television time. The first short features the Flintstone crew except as kids on wacky adventures. The second is easily my favorite when Captain Caveman and son get their own segment. I need a Captain Caveman plushie and quick. The last two episodes include a tiny segment with Dino and a half episode of the kids usually focusing on one of the characters not named Fred.

To close out the first disc, we get Mister T. His first name is Mister. His middle name is the period and his last name is T. You can’t make this stuff up. They also do a live action bit at the beginning and end of the show extremely similar to the Chuck Norris cartoon earlier. He has some gymnast friends and even a white kid named Spike who mimics T. The dog has a freaking Mohawk! Kids do some sleuthing and then Mr. T comes in to clean up. Even sharks don’t want to mess with Mr. T.

The second disc opens up with the Biskitts. No, not the buttery flaky kind. The itty bitty small dog kind. The bad guys are King Max and Shecky the Jester. Apparently the Biskitts have some treasure. A wild guess, dog treats? This show was actually replaced by the Shirt Tales and is just plain bad as it seems to be. The whole small thing is ripped right out of the Smurf playbook.

Speaking of the Smurfs, next is Monchhichis which are very little monkeys. Actually Monchhichi means happiness or you guessed it, “smurfing”. Apparently there are still places that sell Monchhichi dolls and such. There are bad monkeys called grumplins who are purple and the only thing that keeps the Monchhichi so happy? Well it’s the tickle crystal which oddly sounds like a drug reference. The special voice of Wizzar belongs to one Frank Nelson who was famous for his “YESSSSSSSS” catchphrase.

In the world of swords and sorcery, we get Galtar and the Golden Lance. Galtar gains possession of a famous lance which is a double edged glowing sword which can also be broken into two for dual wield action. There is Princess Goleeta to join in on the fun to fight the evil Tormack. The first episode is done with the whole Sword in the Stone idea. It’s not bad, just feels a little generic.

Continuing on the swords and sorcery gimmick, next is Dragon’s Lair based on the popular video game. Dirk the Daring takes on Singe to save Princess Daphne on a regular basis. The interesting thing from this show is that in spirit of the game they would ask the viewer at key points, “What would you do?”. There would be a decision one or two or something three and explains what would have happened to Dirk if you had chosen wrong before going to the right decision. It comes off as a pretty fun show.

The highlight of the disc is next with Thundarr the Barbarian. This is one title that can be blessed with the term, ahead of its time. In the year 1994, the moon gets split in two and the world is ravaged and left for dead. Two thousand years later, in 3994 we have a world that features swords & magic against alien type creatures. There is Thundarr with his electronic sword, Ariel with her magic and Ookla with his incredible strength.

They are fighting against the evil Gemini, a wizard with a double face. On one side, it looks normal and then his helmet turns around and shows his demon face which scares small children and dvd reviewers with weak spines. The first episode shows Manhattan but everybody calls it Manhatt. They even end the episode by fighting against the Statue of Liberty which comes to life due to the magic of Gemini.

The final cartoon is the Kwicky Koala Show. There are three cartoons here and three shorts. Kwicky Koala is in the first toon and has a similar act as Droopy and Speedy Gonzales. This was also Tex Avery’s last cartoon. Kwicky escapes from Wilford Wolf and uses this odd vanishing and reappearing bit. The Droopy cartoons were much more awesome in this idea, but it’s not too bad here.

The other two cartoons involve Crazy Claws who sounds oddly like Groucho Marx as he takes on Rawhide Clyde & Bristletooth. The last cartoon is Dirty Dawg who sounds like another celebrity, this time Howard Cosell (voiced by Frank Welker). He has a friend Ratso and they basically steal food and try to stay away from Officer Bullhorn. The three shorts that are mixed in between the cartoons are the Bungle Brothers, George and Joey. They are dogs who try to do various tricks and always mess up.

These two discs are some of the best & worst examples of Saturday morning cartoons during the 1980’s. Biskitts and Goldie Gold are pretty bad but there are true gems like Thundarr and Mister T who deserve their own complete series set. Most of these shows lasted only about twenty episodes (Chuck Norris was only around for five) but a lot of them have survived due to cult followings and collections like these.

The video is presented in 1.33:1 fullscreen. The picture quality as one might expect varies quite a bit. Most of them are pretty decent and there are a few that do stand out like Thundarr and Chuck Norris. Some aren’t too high on the quality chain (Ed Grimley) and suffer from a lot of washout. Considering that some of these cartoons were thrown back into the vault shortly after they were released, the condition is better than expected.

The audio is presented in English, Spanish and Portuguese Mono. Sound probably suffers the worst here. Most of the shows are dialog heavy with cute corny songs of inspiration throw in. As expected, it is all in the center channel and sound effects are mostly muted. You’ll be able to enjoy it, just don’t expect anything. Subtitles are provided in English, French, Spanish and Portuguese.

To say I thoroughly enjoyed the romp through a bunch of Saturday morning cartoons I grew up with would be a bit of an understatement. The majority of the cartoons were fun to sit through and a great visit to my yesteryear. But in the same breath, the only thing that it really makes me want is full collections. In particular, full collections of Thundarr, Dragon’s Lair and Mister T (with the limited Chuck Norris episodes as extras) would be great collections to my library.

However, that’s what these collections really are, gauges of interest. This is the type of 2-discer you rent and then write to Warner Bros to point out the ones you really like. I do want to draw attention to a warning on back of the case that mentions that these are intended for the Mature adult and are not suitable for children. I have to disagree.

For the most part, these are perfectly suitable for children. In fact, in today’s world where you get a lot of Pokemon and bad anime style cartoons, this is a breath of fresh air. Some of the ideas are complex (see Thundarr) but with a little parenting, it can easily be explained. Recommended to the little kid in all of us. 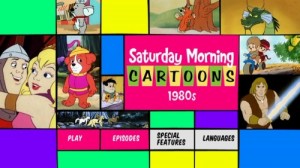 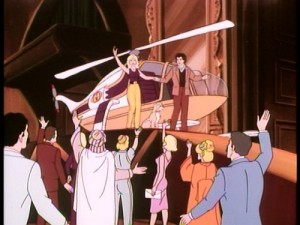 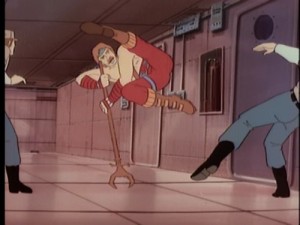 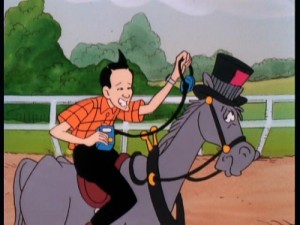 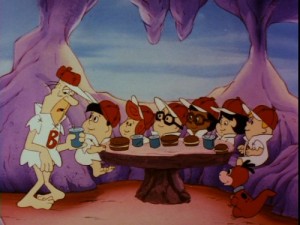 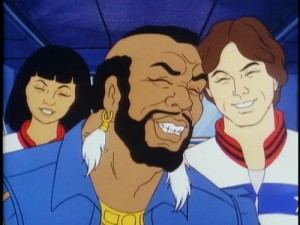 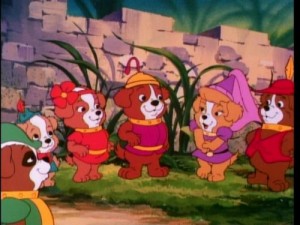 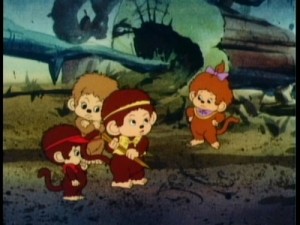 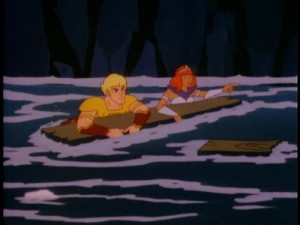 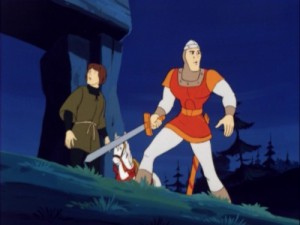 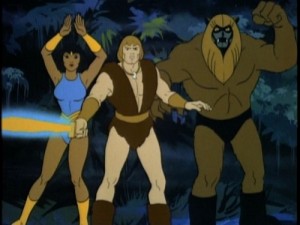 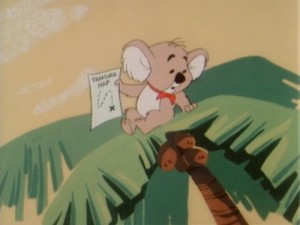 Michael Durr has been reviewing movies for the better part of fifteen years now. He primarily enjoys thrillers, sci-fi, animation and even a little courtroom drama. His favorite films include Escape from New York, the Goonies and anything with Alyssa Milano. When he’s not praising Kurt Russell as the greatest actor of our time or scratching his head over a David Lynch flick, he’s spending time at home in Texas with his lovely wife, Lori and his amazing son. How they put up with him is a mystery, but even Basil Rathbone doesn’t have the time to solve that one.
Five Corners Crazy Heart (Blu-ray)