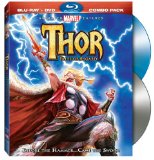 Recently, I saw the brand new live-action film of Thor in 3d on a giant IMAX screen with some close friends (watch for the Hawkeye cameo!). All of us thought the movie was pretty good (though we really didn’t see the point of 3d, big shock). As to be expected, I knew (and hoped) an animated feature of Thor with his big hammer was right around the corner. However, when I received said feature, Thor was right on it, but he was holding a sword? This requires some further analysis.

We open the film to somewhere in Asgard, Thor is fighting a bunch of warriors, armed with swords. The shot suddenly pans up to an appreciative crowd. This would be what one would call a spectator sport. Thor goes back to playing for the crowd and even loses his sword in the process. But one of the combatants lets him pick back up his sword and continue the fight. This is also the time when Sif, a female who is handy with any weapon, shakes her head and walks out of the arena.

After the performance, Thor is greeted by his brother Loki who was watching. This eventually leads to a confrontation with Sif where she calls Thor out on his fighting skill. Thor does not accept the fact that Odin’s guard let him win every time. Thor challenges her to a fight which Sif quickly wins before he can barely raise his sword. After leaving Thor in a bucket of slop, Sif departs. The son of Odin might have to rethink Sif’s comments after all

At the palace, Odin confirms that the guard lets Thor win since he insists on making it a public spectacle. The public simply could not accept their young heir to the throne losing a battle. Thor wants to go outside the kingdom in search of adventure but the king forbids his young son to stepping outside the realm for any reason. Angry, Thor goes to sulk alone among the mightiest of Asgard’s weapons. He is met there by a dark elf named Algrim.

They discuss the Sword of Surtur which is the subject of a yearly contest where young adventures seek it out (but never find it). This greatly interests the son of Odin who goes off in search of his brother, Loki. Loki meanwhile is getting some one on one time learning magic from the alluring Amora the Enchantress. Before that fateful kiss, Thor interrupts and tells Loki of this grand adventure to seek out the Sword of Surtur.

But the Sword of Surtur sits in the heart of what the Frost Giants call home, Jotunheimen. A dangerous mountain terrain to be sure. However, as it turns out that the Warriors Three are about to embark on the same journey. So with a simple plan, Thor and Loki decide to stowaway on the Warriors ship, The Thunder Runner. However, all of the parties involved will soon find out that this quest will make boys into men and much more than any of them ever bargained for.

This is a fairly simple coming of age story but what set Thor: Tales of Asgard apart is the richness of the characters involved. Sure, just about any Thor tale is going to involve Thor and his brother Loki. Mention Odin and a plot line with the Frost Giants and you have a ready set tale. But this one throws in the Warriors Three (which could carry their own feature) and the interesting depiction of the dark elf: Algrim. This represents the strongest part of the animated feature and sets it apart.

The Sword of Surtur also becomes its own character and represents the only true evil force or antagonist in the story. Even the Frost Giants are another shade of grey and they aren’t evil simple because they are big and ugly looking. Loki by most intentions is loyal to Thor at this point and time and despite showing signs of mischief and loose morals, he is fun to watch.

However, the scene stealers of the movie have to be the Warriors Three, in particular Fandral. The one liners, the off-hand facial expressions, the three ring circus feel of a band of merry men. Without it, the show would be Thor coming of age and boredom to follow. It is not perfect but there are so many little nods (like how they reference Thor’s Hammer) and rich Marvel mythology at work here, that it just works.

The video is in 1.78:1 widescreen presentation at 1080p resolution. The animation is similar to other Marvel animated features in blu-ray in concept and design. However, as time goes on I am seeing improvement to color, detail and clarity with each new feature. Fun to watch and the details are fun to pick out where one wouldn’t expect it (example would be the gnomes on top of the chandelier playing music during the bar fight scene). The use of snow was also a very nice touch.

For the audio portion, we get a 7.1 DTS-HD track (Spanish 5.1 Dolby Digital also included). No, true believers that is not a mis-print. Marvel Blu-Ray animated features are back to 7.1 treatment, hopefully to stay. It is loud and an absolute joy to watch. Furthermore, once I got it to the desired level, I didn’t ever have to adjust it for dialog or high intensity action scenes. It is plenty clear and my only criticism would be more surround effects. But the ones used are very well done. Subtitles are provided in English, English SDH and Spanish.

Interesting note, this Thor tale isn’t cheery one bit. It is a dark tale that has death and hard choices at every corner. It could even be argued that this tale is more adult than the feature length live action film currently in theaters. However, along with this morality coming of age story, we have an excellent film full of rich characters and some wonderful Marvel nods that we have come to accept but should appreciate.

The blu-ray package is also worthy of any Marvel fan by providing solid video and simply stunning 7.1 audio. The extras are compact but provide a bevy of information to sort thru. I have a feeling that a lot of fans will approach this animated feature with some caution since it isn’t the Thor tale we would be readily familiar with. But for those who give it a chance, I think they will be rewarded. A good recommendation, and a quality Marvel release.

Michael Durr has been reviewing movies for the better part of fifteen years now. He primarily enjoys thrillers, sci-fi, animation and even a little courtroom drama. His favorite films include Escape from New York, the Goonies and anything with Alyssa Milano. When he’s not praising Kurt Russell as the greatest actor of our time or scratching his head over a David Lynch flick, he’s spending time at home in Texas with his lovely wife, Lori and his amazing son. How they put up with him is a mystery, but even Basil Rathbone doesn’t have the time to solve that one.
The LXD: The Legion of Extraordinary Dancers – Seasons 1 & 2 The Clowns