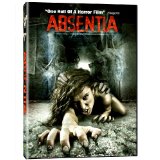 After suffering through the vast majority of low-budget indie horror films whose only motivation seems to be to make a quick buck on distribution deals, it is truly a delight when you stumble on to something wonderful like writer/director Mike Flanagan’s Absentia. Building on a cast of unknowns, with the exception of an incredibly creepy cameo by genre fave Doug Jones, Flanagan weaves a web of creepy, atmospheric horror in this effective low-budget chiller.

This is a film that would be hurt by spoilers, so my synopsis will remain succinct. Tricia’s (Courtney Bell) husband, Daniel (Morgan Peter Brown), has been missing for almost seven years. Pregnant with another man’s child, Tricia remains in a state of flux, packing to move out of the home she shared with Daniel, but never quite bringing herself to find another place. She struggles with signing the application for death in absentia, but longs for the closure it might bring her. Enter her little sister Callie (Katie Parker), a recovering junkie who shows up at Tricia’s doorstep after being estranged for several years.

When Tricia begins to suffer horrifying, very pissed off visions of a spectral Daniel, her therapist reassures her they are nothing more than lucid dreams due to her guilt and conflicted emotions about moving forward with obtaining a death certificate for her missing spouse.  Meanwhile, Callie finds herself drawn to an ominous tunnel near the house. As her investigations possibly link the tunnel to other mysterious disappearances, she begins to suspect that Daniel’s fate may be far worse than anything previously imagined.

This is slow-burn horror at its best. Take a dash of Val Lewton, toss in some Asian horror style creepiness and finish with a touch of indie film psychological character drama, and you have Absentia. There is only one “gore” scene and no nudity, but plenty of atmosphere and dread. Apart from a few clunky lines between the sisters in the first third, it’s a tight script with naturalistic dialog and excellent twists, but the genre elements are not center stage; it’s about the characters first. Flanagan’s script doesn’t pander to the audience, he respects their intelligence. As the story unfolds one starts to realize multiple possible interpretations to the events, which keeps the viewer unbalanced and unnerved.

The chemistry between sisters feels lived-in and real. The story is strong enough to stand on its own without the genre elements, which is a test of a truly great horror movie. Best of all, everyone in the film behaves like a normal person. For example, when Callie discovers some strange items, last seen in the tunnel, mysteriously under the covers of her bed, she calls the police to report a break-in.

The greatest hindrance to this movie is the lack of budget, but in some ways it heightens the movie’s raw minimalistic impact. This probably shows most in the natural lighting, although it is on par with or above most other films in this budget range. Since the audience is left to question how much of what is going on is possibly psychological or drug-induced, the elements that may or may not be supernatural are frustratingly barely glimpsed leaving you wanting more. This actually works in favor of the creepiness, letting your imagination do the heavy lifting.

The DVD is digitally transferred in a 1.78:1 widescreen aspect ratio. Cinematographer Rustin Cerveny shot the entire movie using a Canon 5D Mark II DSLR camera, which captures impossibly rich video in low light,  allowing Flanagan to shoot 99% of his shots using only natural lighting. Some of the low-light interior scenes come off a bit flat and muddy, but for the most part colors are natural and vivid, which is insane because they shot without any production lighting.  Due to the guerilla production values shooting the movie in a little over a week, there is a predominance of hand held camerawork. Not as shaky as Found Footage movies, but more along the lines of any cop show post-NYPD Blue.

Although the film certainly had scenes perfect for a fully immersive surround experience, unfortunately the 5.1 Dolby Digital mix rarely capitalizes on them. The entire experience is front-heavy and doesn’t fully exploit the LFE channel. Although the dialog is clear, the music tended to be a bit overpowering. I am ambivalent about Ryan David Leack’s minimalistic soundtrack. When it works, it is reminiscent of Kubrick’s and Carpenter’s soundtracks. When it doesn’t, it feels heavy-handed and overpowering, which is the last thing minimalism should be.

I can’t wait to see Mike Flanagan’s next movie. I hope Hollywood takes notice and gives him control over a bigger-budgeted feature, but even if he shoots another down and dirty guerilla production, I’m in. Absentia is one of the best indie horror films I’ve seen this decade. Don’t go into it expecting high action or blood and guts; this is a psychological character study horror film. Don’t watch the trailer. Don’t even look at the crappy DVD cover art which shows some naked chick being dragged into the tunnel. OK, look at the naked girl; just know that shit ain’t this film. Turn out the lights, snuggle in your comfy spot, and let Absentia work its way through the walls and under your skin.