Posted in: Disc Reviews by William O'Donnell on March 13th, 2012 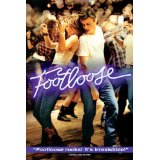 A tragic accident after an uncannily choreographed dance party in the country leaves a carload of teens dead, and their hometown vows to ban all public displays of dancing and loud music. Big City hunk Ren MacCormack arrives in town to challenge this outlawing of music and dance by…mostly dancing to music.

This is a modern update of the 1984 hit film of the same name that starred Kevin Bacon in the role of Ren. Young actor Kenny Wormald steps into these dancing shoes and does a decent job being a youth who charms us through his rebellion. His look is much more James Dean-ish than Bacon’s version, but still an acceptable doppelganger of the original Ren.

Despite being a small town, it does seem comprised of suspiciously profession level dancers. Normally a musical would not need to defend this because everyone breaking into choreographed dance is expected. This film is supposed to be rooted in reality and so there is no grounding for their level of talent…but then I guess if we watched amateurs for and hour and a half we’d be missing the point of a dance film.

The story is loaded with melodrama, including an inexplicable suicide attempt by lead love interest Ariel. This film seems to touch on the tragedies each character faced deeper than the original. This helps to keep the film grounded in some sense, but also distances it from the spirit of fun that exists in all the big dance moments (which there are plenty of).

There are moments of fun, such as the recreation of the “angry” dance, but the message doesn’t seem to need a modern update. This film resembles the contemporary teen and/or dance films that the original helped inspire, that’s about it.

Widescreen 1.78:1. The picture quality is very nice in this transfer. There are a lot of bright colours that come out bright and clear when they need to.

Dolby Digital 5.1 DTS-HD Master Audio, and 5.1 Dolby Digital in French, Spanish & Portugese. The sound is key in this film and all elements are mixed well. The music is the most clear of all things (shocker, right?). There are tiny moments where the dialogue and effects blend a little sloppier than one might wish, but the music is always clear.

Jump Back: Re-Imagining Footloose: Doesn’t so much explain a re-imagining but more the creator’s enthusiasm and fandom of the original.

Everybody Cut: The Stars of Footloose: Profiling praise of the star cast. Lengthy fan service.

Dancing with the Footloose stars: Another thing that got updated with the music, naturally, was the style of dance moves used for the biggest dance-offs. A perfectly suiting featurette for this sort of release. Nicely assembled.

Deleted Scenes (with optional commentary): A bit more exposition that is implied and/or resolved in scenes included in the main feature.

Music Videos: All assembled with the usual mix of new performance footage from the artist and clips from the film. It’s easy to detect which of the 3 is not a remake from the original soundtrack.

-Ella Mae Bowen’s “Holding out for a Hero”

Footloose Rap: By Emily Whitcomb, who originally made this rap for an online video. It was inspired by the 1984 film and director Craig Brewer invited her to perform it for a screening crowd in Minnesota. Charming.

Commentary by Director Craig Brewer: Brewer is an enthusiastic filmmaker who tells stories of the film’s creation with a good energy. He has things to say about all of the cast and major contriutors, and it’s all glowing.

The modern updates seem to only be in a few songs, and Ariel dances a touch bit sluttier than her 1984 incarnation…that’s about it. This film is very close, and mostly redundant. It’ll find new fans and not break a single inch of new ground.