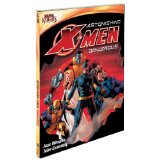 I have read more than my fair share of comic books. In recent years, I made the jump into graphic novels which are basically the same thing with a fancy cover. There is also another trend that I have seen from time to time in the last several years, digital comics on dvd (and occasionally blu-ray). The concept of taking a comic, adding voices, sound effects and a little motion and coming out with a product that can reach new and old audiences. Let us take a look at Astonishing X-Men: Dangerous.

A female voice lets us know that something is coming, they can feel it. The view shifts to a young man who goes by the codename, Wing. He is a soon to be former X-Men in training. At one point in his life, he had the ability to fly. However, due to events not explained he lost that ability and in the process, he lost his will to live. He stands over a cliff and hopes for the powers to come back.

The scene shifts to the Blackbird (the X-Men’s jet). Colossus is surfing on top of the jet and inside is Wolverine, Emma Frost, Beast (in cat-like form), Kitty Pryde, and their leader, Cyclops. Their destination is a large green monster who is terrorizing a local city. Colossus starts the fight with the monster and soon the other X-Men join in the ruckus. As they try to take down the monster, another superhero team shows up to help out. It is no other than the Fantastic Four.

The scene comes back to Eddie also known as Wing. A fellow X-Men recruit joins him at the top of the cliff. Her name is Hisako and she goes by the code name of Armor for her amazing ability to form and shape her own powerful armor. They appear to be best friends and she does not wish for Eddie to give up his life simply because he has lost his powers. Shortly after, Hisako decides to leave Wing to whatever fate he decides.

Back at the fight, the X-Men and Fantastic Four have won but we get some in-fighting. Thing and Wolverine are at each others throats and there is an uneasy tension in the air. Eventually it calms down. The scene shifts to the infamous X-Men Danger room, a vessel built by Charles Xavier to simulate and train the X-Men in combat situations. Lying on the bottom of the danger room floor is what appears to be Wing, face down and in a pool of his own blood. The screen flashes “Simulation Over”, but it appears that the real story has only begun.

As explained in the opener, this is a digital comic. Voices are added, sound effects are thrown in and some movement is also added to make a kind of poor man’s cartoon. The original books are Volume 3 of Astonishing X-Men, issues 7-12. (Issues 1-6 or “Gifted” are also available on DVD). It is written by Joss Whedon and drawn by John Cassaday. The first 6 issues did very well and received an award or two. This block of issues is not a bad story, but it suffers from a few issues.

If one is not familiar with “Gifted” (Guilty!, but I did some research), even X-Men aficionados are going to be a little confused at Emma Frost’s involvement along with Beast’s unusual appearance. A simple 5-10 minutes of catching up new viewers would be greatly appreciated. The disc is only about 60 minutes long (with another 10 minutes of intro/credits for every issue) and there is hardly any production value attached to it.

Outside of that, I did not really care for the sub-story with the green monster and the Fantastic Four. It seemed so out of place and only served as a diversion to what was going back on at the mansion. Also, certain characters seemed completely out of well…character. I am looking at you Emma Frost and Charles Xavier. Still, it was a decent story, just marred by a few off-putting issues.

The video is in 1.85:1 anamorphic widescreen presentation. The art which is done by John Cassaday is excellent. Full of color, full of life, this is why we read comic books in the first place. However, the transformation to the medium of DVD is not perfect. Characters tend to move unnaturally and certain frames appear washed out. It is still fun and enticing to watch but do not expect a full-fledged cartoon. Think of a comic book put on wheels.

For the audio portion, we get a 2.0 Dolby Digital Stereo track. Sound was a bit of a disappointment. I had seen other digital comics on DVD that sported 5.1 sound and sounded every bit as good as a medium budget action movie. This one is fairly weak but it does the job. Dialog is clear but the sound effects are minimal and it does only an okay job of getting to us to feel the action on-screen. No subtitles are provided which is sad considering this is adapted from a comic book.

I would love to see more comics make the way of digital comics on dvd (and blu-ray). With that said, I would also like them to sport a little more production value. Catch us up on prior events, give us some extras and makes us want to own this little slice of comic heaven rather than waiting for it to hit the $5 bin. The low retail price does help but unless I researched it, I would not even have known what comic book issues this was supposed to represent.

The story is only slightly above average and as mentioned a few times now, it is kinda confusing if you are not one hundred percent up on your X-Men knowledge. I would recommend this to that group who love comics and can spout off more mutants in ten seconds than a housewife can spout off daytime soaps. However, the average comic lover or person expecting something close to an X-Men movie is going to be left in the dark. With that said, hopefully more of these will show up in the future with more effort.

Michael Durr has been reviewing movies for the better part of fifteen years now. He primarily enjoys thrillers, sci-fi, animation and even a little courtroom drama. His favorite films include Escape from New York, the Goonies and anything with Alyssa Milano. When he’s not praising Kurt Russell as the greatest actor of our time or scratching his head over a David Lynch flick, he’s spending time at home in Texas with his lovely wife, Lori and his amazing son. How they put up with him is a mystery, but even Basil Rathbone doesn’t have the time to solve that one.
Thou Shalt Not Kill… Except (Blu-ray) Bounce (Blu-ray)