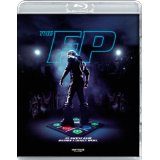 Cult movies are some of my favorite kinds of movies. I am a complete sucker for Rocky Horror Picture Show and films like the Warriors or Duel. These movies are often a product of their time but are not fully appreciated until many years later. Today, I am reviewing The FP, a film that attempts to be a cult classic but without going through the usual hoops of society. As we go to the film, one has to wonder if that is even remotely possible.

For Years, an underground war has raged for dominance over the small town of Frazier Park between two clans: the 248 from the North and the 245 from the South. Now…with a skirmish between the two clan leaders imminent, the battle for the FP has only just begun.

We begin in a seedy looking bathroom, with JTro (played by Jason Trost) looking into the mirror and pumping himself up for the inevitable battle. His brother, BTro (played by Brandon Barrera) comes into the bathroom and asks if he’s ready. JTro nods in acknowledgement and the move outside to the club. They are met by fellow 248 member and head announcer KCDC (played by Art Hsu) who also asks if they are ready.

Out of the corner of JTro’s eye, he sees a girl he knew from a long time ago, Stacy (played by Caitlyn Folley) who is hanging out. They talk for a short time but he is interrupted by his opponent in this challenge, Sugga Nigga (played by Bryan Goddard) and his fellow gang member, Beat Box Busta Bill (played by James DeBello). Sugga slams JTro verbally, but its time for the competition; this is no time for words.

The competition is Beat Beat Revelation (think Dance Dance Revolution), it’s how gangs settle things in Fraizer park. We Roll Together, We Live Together, let’s 187 this beeeotch! Sorry, I was quoting BTro there. Sugga and JTro duel on the battlefield. JTro scores an easy victory and the crowd cheers. But that is not the main event tonight. The real fight is up next, and it’s BTro versus L Dubba E (played by Lee Valmassy), the 245’s leader.

The next battle is on. But this is not a normal match of Beat Beat Revelation, its Gangsta mode! The mode is way too much for BTro and he falls down and can not continue any longer. As VTro runs over and BTro’s eyes close, we realize he has been 187’ed. JTro screams and cries for his brother, he will never play Beat Beat Revelation ever again.

One year later, JTro has become a lumberjack and left the turf warfare game. KCDC rolls up and asks what he is doing. The 248 needs JTro but he is not going to budge. We later see JTro walking down the road when KCDC again drives up and tries to convince JTro to come back. The FP is in shambles, L Dubba E is in charge of everything including the booze and they need him to save the FP. KCDC finally convinces JTro to come visit the new 248 leader, BLT (played by Nick Principe).

Once JTro gets to BLT’s house, they work on setting him up with a tent outside. Furthermore, he has to earn a lot of street cred to get back to the point where he can face L Dubba E. JTro is not too keen on the idea and bails. However, he then sees that Stacy is now L Dubba’s E girlfriend and that she is being emotionally abused by her father. With all of Fraizer Park collapsing, he realizes he has to take it back. JTro must take back the FP.

If you have not figured this out yet, The FP is not a serious film by literal nature. However, it is played 100% serious from Frame 1 to the rolling credits. What makes this movie so remarkable is the sheer absurdity of the events which are played up as everyday life. Everything from the characters to the dialog to the wardrobe to the fact that these guys are holding turf wars over a dancing video game is nothing short of completely epic.

Furthermore, the Trost Brothers basically did something that is unheard of in the industry, they created a cult film. Cult Films are not created, they become that status after usually years and years of a small following. See Rocky Horror Picture Show, see Escape from NY, see the Warriors and to a smaller extent, see Mad Max (though that eventually became mainstream). But FP is that movie, and years from now, people will be discovering it for the first time and wondering how it escaped their radar.

My only knock really against the movie is that it is a little short (83 minutes) and no offense, but the character of Stacy is almost a little too absurd to the point where she is not very likable. She is a character that we should like but they play her to the point where we hope she would have a little more backbone. I know, it is the whole hopeless female bit, but it comes off oddly at points. However, it does feed into one of the greatest ending shots ever in a movie.

The video is in 2.35:1 widescreen presentation in 1080p resolution. The video looks a lot like Crank 2 and it should. That’s because it is done by the same people and with the same type of equipment. The equipment creates a very realistic effect and some wonderful high definition results. Color is vivid and picture quality is excellent. Costumes pop and scenery is bold on the smallest of budgets. Most will be very satisfied by this presentation.

For the audio portion, we get a 5.1 English DTS-HD track (Additional tracks include 5.1 Dolby Digitals also in English). Audio fares very well too and the sound here is nicely balanced. Dialog despite the thug talk is very clear. If somebody is calling somebody else “a ham sandwich”, there will be perfect distinction. Furthermore, it must be noted that the music is wonderful and well suited to the situation. If it sounds a little “Running Man”, that was the full intention of the composer. Subtitles are also included in English (which might be useful given the dialog).

If one is trying to figure out the references for this movie, here is a short personal list. The most obvious is Rocky, but there are others like Warriors, Mad Max, Bloodsport, Running Man and I swear there was even a Double Dragon influence or two. Heck, you could even draw comparisons to Scott Pilgrim in some aspects. It is a fantastic movie from top to bottom and the great joke is that they played this to complete perfection by being so absurd and serious at the same time.

The blu-ray is also a very nice effort. Strong video and audio and a very nice extras section is great for those of us who are used to more than some twenty minutes behind the scenes feature and crappy cover art in an eco case. I give this a strong recommendation as long as one takes this movie at its absurd best. It’s not for everybody but for those who get it will appreciate the heck out of it. And if you don’t, I will just have to 187 you beeoooootch!

Michael Durr has been reviewing movies for the better part of fifteen years now. He primarily enjoys thrillers, sci-fi, animation and even a little courtroom drama. His favorite films include Escape from New York, the Goonies and anything with Alyssa Milano. When he’s not praising Kurt Russell as the greatest actor of our time or scratching his head over a David Lynch flick, he’s spending time at home in Texas with his lovely wife, Lori and his amazing son. How they put up with him is a mystery, but even Basil Rathbone doesn’t have the time to solve that one.
Contest: Win Bloddy Disgusting Select Series: Exit Humanity On DVD Rock of Ages