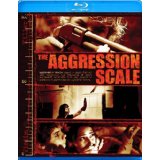 After a family moves into a new home, they are taken hostage by a group of hitmen who are searching for money that has been stolen from a crime-boss. The film’s title, “Aggression Scale,” refers to a psychological evaluation that measures the tendency for an individual to act in aggressive ways that may harm others. This applies to our hero Owen, the son of the family, whose violent/survivalist tendencies are worrisome and detrimental in all situations except this one, where he may be the savior of the family.

Many other reviews, including those quoted on the DVD box art, refer to this as a hyper-violent version of Home Alone. This is in reference to the sort of traps the Owen sets out to harm the hitmen. Granted, the climactic final trap does have a couple nods in that direction (with the use of nails and Jacks as booby traps) but Owen’s devices are less comical and complex (save for the aforementioned climactic trap) and more brutal and reminiscent of something Rambo might construct. I suppose the comparisons are made less because of the traps, but more the cat-and-mouse game being played between a child and a group of career criminals. Since Owen never speaks, the communication between these two parties is purely through acts of violence upon each other. This bare bones dynamic saves us some groans from any redundant, cheesy banter…which I appreciate.

Before the hitmen and family meet, the film does a decent job introducing and establishing the family as characters we can actually care about, but still doesn’t get much more than the way a slasher film might introduce future victims. As the film converts into a violent thriller, the most important character elements are left half-baked; such as a more in-depth explanation of Owen’s abilities as a trapper outside of displaying a couple of military tactics and survivalist books in his bedroom. There is still enough here for us to care, but my curiosity aimed more towards how Owen will dispose of the hitmen, and less about whether anyone would actually survive (be they villain or hero).

This film stands out amongst other B-Level thrillers, but only by a hair. With a little more time given to both the character development as well as some of the action scenes (CG blood ALWAYS looks terrible in my books, and some moments dragged way too much), then this film could have been that much more special in the eyes of those seeking something exciting but are sick of gore for the sake of gore.

Widescreen 2.4:1. Be it a symptom of budgeted filming, or a purposeful choice in order to achieve a more grim look…there are many shots that often look quite gray, and thereby, faded and not very crisp in picture quality. Not great overall, but acceptable.

Dolby Digital 5.1 in English and 2.0 in Spanish are available. There isn’t much of a score to comment on, and the sound effects sound a bit too canned for my liking. More could have been done to the mix to blend these sounds together better so that it all seemed more natural and wouldn’t take the viewer out of the scene, like it did for me.

The Making of The Aggression Scale: A short behind-the-scenes look that is just about positivity. Even when their producer is trudging through a marsh to move stones, he does so with good humour.

The last half of the film evokes a violent Home Alone comparison, and audiences seem to prefer it that way. This is a decent thriller for those bored with Hollywood tripe. It won’t rock your world, but it shouldn’t disappoint.

Star Trek: The Next Generation – Season One (Blu-ray) The Watch