Posted in: Disc Reviews by Michael Durr on August 14th, 2012 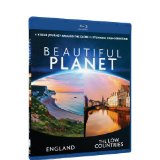 Living here in Texas, I have to be blunt and admit I do not spend much time outdoors. This is mostly due to the fact that it seems to be summer for almost ten months out of the year and somehow I just don’t dig 90 and 100+ degree temperatures. When I can afford it, I would love to go somewhere with respectable temperatures and be able to walk around in decent weather. Perhaps the Beautiful Planet set is for me, where I get to see beautiful high definition video of some of the planet’s most wonderful places.

We start out in England at the Kew Palace which was built in 1802 by King George III as well as James Wyatt. Also, worthy of interest is the Kew Gardens for which was put on the list of World Heritage sites in 2003. Of particular curiosity, we also see a Chinese Pagoda that was built in 1761 along with the Palm House that was built by Decimus Burton around the 1840’s. From there, we travel to the Westminster Palace which is known for the Houses of Parliament.

It is then off to Belgium where we first visit Brugge (known as Bruges in English) which is famous for many canals, its historic centre has been a World Heritage site since 2000. Famous buildings include Church of Our Lady and a belfry that has 48 bells. Then we are whisked away to Kinderdijk, a village in the Netherlands about 15km east of Rotterdam. It is perhaps most famous for its system of windmills, all of which were built around 1740.

Our first visit into Germany takes us to the Reichenau Isles. Its main attraction is the monastery, the Abbey of Reichenau. In addition they are quite famous for their vegetable farms and a large nature preserve named Wollmatinger Reid. Then it is off to Wurzburg, rich in history as well as beautiful sites such as Fortress Marienberg and various vineyards. Palaces are also here such as Wurzburg Residenz that signifies ties to the Holy Roman Empire.

From there we go to Bamberg, the capital of the Holy Roman Empire. This is also a World Heritage site, famous for its cathedral that holds the tombs of Henry II and Pope Clement II. Its authentic medieval appearance including a castle and an Old Town Hall add to the spectacular wonder. We finish up the trip in Germany with a stay at Speyer located by the Rhine River. Its cathedrals are wondrous as well as the Technikmuseum Speyer, the Transportation Museum.

We leave Germany after a good stay and go to Austria for a couple of stops. Hallstatt is our first stop which is famous for its small town appeal and that it can toured on foot in a mere ten minutes. It was also famous on a scientific level for its salt mines. Then our final stop for this disc takes us to the Schonbrunn Palace, a major tourist attraction and an important cultural monument. The plethora of gardens and sculptures make this a fitting last look at the picturesque Austria.

Are you still awake? Well provided you actually are, you are in much better shape than me or my wife after about 30-45 minutes of either program. I had to skip around to make it interesting and keep me stimulated enough to keep trucking through the sites. It is not that I would not love to visit these countries and even some of these locations, but the program does not make it seem terribly interesting. Furthermore, the presentation drags it down even further.

The announcers they picked to do the voiceovers are either reading from the most mundane script ever or took sleeping pills before they started their broadcast. All of the locations here are UNESCO World Heritage Sites for various reasons. But the problem is that it felt like they picked solely on that reason and not because of overwhelming beauty. Part of the reason this was very difficult to get through as well was due to something I’ll go over in the video section.

The video is in 1.78:1 widescreen presentation at 1080p resolution. This is supposed to be filmed in 1080p High definition video. You honestly could have fooled me. Sure, some shots do have a resemblance of 1080p, but by and large there are the exceptions rather than the norm. The worst occurs when they decide to do a trailing shot where the camera moves from one spot to another.

All we get is a really blurry effect until it gets to the next shot. I could sit here and show you a few amazing shots, but by and large this is very average camera work. Actually, for blu-ray it’s below average. I expected much better. It is not that the color is not there, it is. It’s the definition or lack there of that really frustrates me.

For the audio portion, we get a 2.0 Dolby Digital track in English. I am not sure where they found these people to do the documentary but you could literally fall asleep to it. Monotone does not even begin to describe this. Furthermore, all of these speakers have fairly noticeable accents, so that makes it even harder to listen and understand. Did I mention there are no subtitles at all? Yeah.

This could honestly qualify for the worst Blu-Ray audio I have ever listened to. The only decent thing is that the selection of background music is somewhat varied. However, at certain music cues, I was half expecting Michael Meyers to jump out with a machete. Completely bizarre.

Personally if I had to pick a favorite among the two discs, I would certainly go with Germany & Austria due to that would be the countries I would most likely visit. They are also longer and more detailed. However, both of these are complete snooze fests and hardly leave any chance for the viewer to enjoy themselves. The idea to do this kind of subject matter and locations is awesome, but the execution is completely wrong.

The video is mediocre at best and the audio is mundane, muddled, and there are no subtitles in sight. To be honest, these discs are best around the 5 dollar range as a mild curiosity. Then turn off the sound, play the discs at parties and people will completely ignore the television allowing you to engage in perhaps meaningful conversation. Not recommended unless you are having trouble sleeping. Given the cost of sleeping pills, this might be a cheaper alternative.

Michael Durr has been reviewing movies for the better part of fifteen years now. He primarily enjoys thrillers, sci-fi, animation and even a little courtroom drama. His favorite films include Escape from New York, the Goonies and anything with Alyssa Milano. When he’s not praising Kurt Russell as the greatest actor of our time or scratching his head over a David Lynch flick, he’s spending time at home in Texas with his lovely wife, Lori and his amazing son. How they put up with him is a mystery, but even Basil Rathbone doesn’t have the time to solve that one.
Contest: Win Barack Obama From Biography Pawn Stars: Volume 5