Posted in: Disc Reviews by Michael Durr on August 16th, 2012 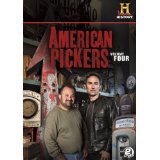 The wife and I have spent quite a few weekends within the last year going to antique shops and malls, flea markets and basically any place where we might go through a pile of stuff to find that one special item for our collection. The search has produced many interesting items and it brings us joy to see all of the items that simply do not show up in a retail store. Today, we are reviewing American Pickers volume 4, a show that lives on the art of finding that next treasure by going through America’s backyards.

For those who are not familiar with what exactly is American Pickers about, here is a short synopsis There are these two guys, Mike Wolfe and Frank Fritz who roam the United States in search of knick knacks, car parts, collectibles, anything that will bring them money. A picker. Their method is somewhat unorthodox as they actually visit people’s homes, storage sheds, and any other place where somebody might store their collection.

Sometimes it is totally random or freestyle as they like to call it. They might see a car in the shed and a few outlying houses. This prompts them to start knocking on doors and see if the owners are willing to sell them anything. Sometimes, they will get a lead from the beautiful Danielle (who runs their shop called Antique Archaeology) who does a fantastic job of calling locales and finding out who has the best stuff available. Regardless of method, the guys find a little of everything.

On to volume 4. These eight episodes on two discs, take us from episode 17 to episode 24 of the second season. For the uninformed, the show is now well into its fourth season. Pick up the pace guys, come on. Despite the show’s dvd release schedule being way behind in my opinion, this selection of eight shows really put on display some fun times to be had. Let us explore a few of the episodes in assorted detail.

Fairlane Fever is our first episode. Mike and Frank have given a mission to poor Danielle, selling a vintage carnival ride that has been sitting at their store for a while now. Meanwhile, on a Danielle lead, they are able to pick up a vintage clock, ice cream shop sign and a trade simulator. However, the real fun starts when they go freestyling and find a 1967 Ford Fairlane. But these classic cars are certainly far from cheap. The show takes a fun turn when they visit the International Clown of Fame. The two pickers get the privilege of going through the extra stuff the museum has found throughout the years in creating this wonderful spectacle.

Too Hot to Handle is up next. This takes us to upstate New York. The first stop takes us to a daughter whose father has left behind fourteen warehouses of collections. It leads them to wooden bicycle rims, a Yankee Dirt Bike as well as a stereo, microphone, and stage light. Later, they are allowed into an old cheese factory that has been boarded up for years. In order to get into the old factory, it requires the help of the nearby fire department. They do find a couple of things including a fern stand, a toy and some fishing poles. From there it’s to a very eccentric couple (daughter and mom) who own a very special house. It happens to be the location of an old underground tunnel home that was used to help the slaves. This one is kinda neat because it is blatantly obvious that the daughter has a huge crush on Frank and unfortunately he is not at the least receptive.

But on the second disc is the true gem of the set. In They Boldly Go, the duo are off to Kentucky. But this is not an ordinary pick. Actually it is not even a pick at all. They are invited to take a look at William Shattner’s summer home with the sole purpose of furnishing one of the Shattner’s rooms. Among the items desired for the room and nearby outside include a millstone as well as a pie safe and other vintage finds. Mike and Frank quickly realize they are no designers and call up an old friend to handle that part of the job. The duo then do what they do best and are off to a few locations including Tennessee to find the rare items that the Shattner’s desire. The way that Frank and Mike actually pull this off is simply amazing.

This volume set had a reasonable amount of interesting finds. From a Ford Fairlane to a Happy Days pinball machine to Planet of the Apes thermos (and lunchbox) to a Batman Mobile Bat Lab Volkswagen toy van, they really find it all in these eight episodes. Furthermore, I can not even express how awesome the William Shattner episode was. It also shows just how far Mike and Frank have come in this picking profession.

There was not very much of Danielle these eight episodes which is something of a downer personally for me. She was there however for her usual here is the next lead or if we need to sell a couple of things at the shop that are collecting dust. Moving on from personal crushes though, my compliments and disappointments remain the same. There are plenty of good picking and plenty of locales. The disappointments remain how few episodes appear on a volume and that outside the Shattner episode, there is virtually no reason to go back and rewatch these.

The video is in 1.78:1 anamorphic widescreen presentation. The show looks pretty good as A&E runs most of their shows in high definition widescreen allowing for a good bit of detail. Also, you get to see all of the crap up close and sometimes you just want to yell, “HEY MIKE, GO OVER THERE!” They hardly ever go look at the things we as the viewer are curious about. Good presentation overall.

For the audio portion, we get a 2.0 Dolby Digital Stereo track in English. As wonderful as the video is, the volume is not much to speak of. It is 100% dialog (unless you count a barn door closing as a sound) and your only difficulty of listening to it will be limited by some of the harsh mid-west accents. In that sense, it is perfectly manageable. But considering they are out in the country constantly, you would think you might hear cows or something. English and Spanish subtitles are included.

Episodes
I am not sure I have recommended a volume set for the sole purpose of watching one episode. But I guess in some small way, I actually am. American Pickers is a consistently decent show but its really hard to recommend these volume sets. There are eight episodes here but really when the dust settles, I am only going to love me some Shattner. After that summer home of his is out of this world (okay that was awful, let’s move on).

The disc has reasonable audio and video but yet again the set is completely devoid of extras. There are no commentaries, extra footage or even a really silly interactive trivia game (no I am not suggesting they include one, I’m just mentioning that something would be appreciated). This set comes recommended at the right price and if you have the other volumes in the series. I am just thinking that at some point we will see some kind of mega collection one of these days. But until then, enjoy American Pickers Volume Four.

Michael Durr has been reviewing movies for the better part of fifteen years now. He primarily enjoys thrillers, sci-fi, animation and even a little courtroom drama. His favorite films include Escape from New York, the Goonies and anything with Alyssa Milano. When he’s not praising Kurt Russell as the greatest actor of our time or scratching his head over a David Lynch flick, he’s spending time at home in Texas with his lovely wife, Lori and his amazing son. How they put up with him is a mystery, but even Basil Rathbone doesn’t have the time to solve that one.
One in the Chamber (Blu-ray) Girls Gone Dead (Unrated and Exposed Edition)