Posted in: Disc Reviews by Michael Durr on August 21st, 2012 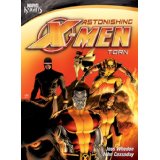 I have read more than my fair share of comic books. In recent years, I made the jump into graphic novels which are basically the same thing with a fancy cover. There is also another trend that I have seen from time to time in the last several years, digital comics on dvd (and occasionally blu-ray). The concept of taking a comic, adding voices, sound effects and a little motion and coming out with a product that can reach new and old audiences. Let us take a look at Astonishing X-Men: Torn.

Some time ago, Emma Frost sits on a boat and has a talk with Cassandra Nova and asks why me? The telepath explains because Emma is a predator and that she will do what’s best for her. She also mentions that they are all going to die, millions will die within minutes. But how is Emma going to survive? A secondary mutation will be created for this benefit. Furthermore, Emma hopefully likes diamonds as we cut to the opening.

Wolverine talks to a bunch of students at the X-Men academy. Last time there was a fight in his mind, the students completely wussed out. The students try to offer excuses but Wolverine is having none of it as their combat teacher. Self-pity across the hall, go see Scott Summers. The Danger Room is no longer operational but it still has its uses as the lights go down and the claws come out. He dispatches them fairly easily as these students have a lot to learn.

Meanwhile, Kitty Pryde and Piotr (Colossus) get a little closer in their relationship. As they discuss each other, Kitty’s dad comes up from nowhere. Kitty can not believe it and as she rushes to hug him, her dad has only one question for her. “Why did you let us die?” The body of her dad turns into a horrifying corpse and disappears before Kitty wakes up. Piotr consoles Kitty and the scene ends.

The Hellfire Club is having a get together with Emma Frost, Cassandra Nova, Negasonic Teenage Warhead, and of course Sebastian Shaw. They discuss Genosha and Emma’s purpose now that prior events have taken place. Cassandra explains that they have been very patient with Emma and the time has come. Sebastian motions over to a cloaked figure in the background known as Perfection. Perfection raises a skeletal hand and tells Emma that her time is now.

Emma is back at the X-Men mansion as the words of Perfection echo in her head. She opens the door to Scott (Cyclops) and asks for him to come to bed. Scott ignores Emma because he has bills to pay, something that Emma does not care to do. But Emma Frost insists that she has something special for Scott. In fact, it is his favorite costume. We pan from Scott to Emma who has now taken the shape of Jean Grey, Phoenix as we fade to black.

This story follows issues 13 to 18 of Astonishing X-Men which later was collected into a graphic novel by the same name as the disc. The story soon becomes a tale of how the Hellfire Club infiltrates the X-Men mansion and break down the senior X-Men one by one. Events trickle down from there. I mentioned in my prior review of the second volume that I was not too happy with the story. I am not sure if this is a case of a comic hitting its stride but this is really really good.

The characters really start to develop here but mainly because of the relationships they form and less because of the action on-screen. There are some chilling horrific events, hard hitting action and even a little bit of humor. This is all combined into a wonderful tale where we are eager to see the next panel and a little bit anxious when the final screen plays out. But I have always thought the Hellfire Club have provided to be an excellent adversary for the X-Men to overcome.

The video is in 1.85:1 anamorphic widescreen presentation. The art which is done by John Cassaday is excellent. Full of color, full of life, this is why we read comic books in the first place. However, the transformation to the medium of DVD is not perfect. Characters tend to move unnaturally and certain frames appear washed out. It is still fun and enticing to watch but do not expect a full-fledged cartoon. Think of a comic book put on wheels.

For the audio portion, we get a 5.1 Dolby Digital Stereo track. This is a lot more vibrant than the previous volume, Dangerous. Dialog is very developed and clear while sound effects now jump to the forefront with strong surround use. The music undertones are also very well done. This is what I expect from my previous history into digital comics. A well developed comic transformed into a well developed digital cartoon with boom. No subtitles are provided which is sad considering this is adapted from a comic book.

Night and Day. That is the best phrase I can think to sum up the difference between volume 2: Dangerous and volume 3: Torn. Torn is an excellent story and the people behind this dvd have upped the production value. The video is well done and the sound has been increased in quality and volume ten fold. However, in order to full understand this volume, you do have to have the other two in either comic or dvd form. Highly recommended and I can not wait for the next volume.

Michael Durr has been reviewing movies for the better part of fifteen years now. He primarily enjoys thrillers, sci-fi, animation and even a little courtroom drama. His favorite films include Escape from New York, the Goonies and anything with Alyssa Milano. When he’s not praising Kurt Russell as the greatest actor of our time or scratching his head over a David Lynch flick, he’s spending time at home in Texas with his lovely wife, Lori and his amazing son. How they put up with him is a mystery, but even Basil Rathbone doesn’t have the time to solve that one.
The Dictator – Banned & Unrated Version (Blu-ray) Battleground