Posted in: Disc Reviews by Michael Durr on November 27th, 2012 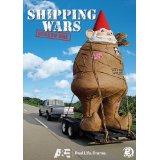 Is it just me or does every new reality show have to feature the word: Wars? We have Storage Wars, Property Wars, Parking Wars, and I believe I just heard the other day we have Weed and Whisker Wars. Apparently War is good for reality show business. Well, today we have yet another war to throw on the proverbial fire. Shipping Wars, sponsored by UShip.com and on A&E Television. I guess we need to go find out which trucker will come out on top in this season one package.

The basic premise of Shipping Wars centers on the website known as UShip.com. UShip.com’s plan is simple, if you have something you do not know how to ship, you can list it on the website. Then for the truly odd items, the website offers them up to potential shippers in a reverse auction scenario. Occasionally, the low bidder does not win and the one who gets the shipment is the one with the best feedback. For show purposes, we have a usual list of players who create the reality element.

Roy Garber, nicknamed the handyman is characterized by his love for animals (particularly his cat), his long hair and can do attitude. Marc Springer is next who owns a big rig and is the best choice for the large jobs. Jennifer Brennan is the female cowgirl of the group and is particularly adept at livestock transport. Jarrett Joyce is the rookie of the group who is trying to find his next big break shipment. Finally, we have Suzanne and Scott Bawcom who are veterans to the industry and represent the couple aspect.

Looking at the pilot episode, we quickly dive into our first reverse auction with a very elaborate item, a metal horse statue from Ripley’s Believe it Or Not. Roy pulls out the best bid and his ready for anything attitude is just what this shipment needs. In another auction, the rookie Jarrett pulls out the bid for an oversized Venus flytrap (think Little Shop of Horrors). However, with his low-ball bid, he will have to pick up some additional loads to make it worth his while.

In a later episode, Bullship, we catch up with Jennifer who wins a bid to take two bucking broncos from Decatur, Texas to Ohio. She will have to figure out how to take care of two crazy bulls for three nights. We also watch as another shipment has Marc go from Colorado to Arkansas with a very elaborate gyrocopter. But he has to make sure that he does not leave anything behind.

Moving on to disc two, we take a look at Tavern on the Greenbacks which sees Roy going from New York City to Florida transporting a 9000 pound food truck of very famous origins. Meanwhile, the rookie Jarrett is hitting the plate again with a 400 pound African head sculpture. This seemingly easy task will end up anything but that for the inexperienced youngster.

Our final episode for sampling is Baja or Bust where Marc has to transport a pristine off road 4×4 truck from Colorado to across the border in Baja, Mexico. Customs, directions and load always weigh heavy consideration when going into international ground. We also see Scott and Susie take on a very delicate Pirate prop ship that goes from Las Vegas to Cleveland, Ohio. They have to be careful so that the shipment does not end as a pile of matchsticks.

The one thing I noticed immediately about this series is that for the most part they build characters very well. We have the rookie, the cute cowgirl, the wily veteran and the well equipped big trucker. Oh, we also have the veteran couple but to be honest, the audience had a hard time connecting with them at all. This explains why they were replaced by a hotshot younger couple for the second season.

One could also argue that somebody such as Jarrett is only on the show because he is a magnet for disaster. If we were to follow UShip’s feedback practices, Jarrett would be thrown off the website in rather short order. We also learn that independent trucking is a very nasty business and unless you are a real pro (see Roy and Marc), profit is razor thin and handling expenses is most of the battle.

The video is in 1.78:1 Widescreen presentation. These are your typical drive around the United States (and sometimes neighboring countries) and see the sites. The sites however are rarely anything fancy and are more typical trucking land USA than anything else. Occasionally, we’ll get something special like a Ripley’s Believe it or Not but there are hardly any awesome details to point out unless you like highways, byways and insert road name here.

For the audio portion, we get a 2.0 English Dolby Digital track. This is nearly one hundred percent dialog and road sounds. Dialog is thankfully clear and there are no difficult accents here to decipher. In the stereo department, we occasionally get a little crack or smash associated with somebody’s load breaking but again nothing special. English and Spanish subtitles are also available.

Shipping Wars is currently running its second season. As mentioned above, the couple of Suzanne and Scott Bawcom is replaced due to interest factor most likely. This collection of episodes help introduce us to a cast of characters where we can easily develop favorites. Heck, outside of the Bawcoms I really like everybody on this show to varying degrees. The only negative has to do with the sometimes sketchy feedback and how it plays into future jobs.

The disc is an above average presentation from A&E home video. It has the usual HD video and dialog driven sound along with at least something in the extras department. For those who have watched some of the other A&E reality shows, this fits right into the family. I give a good recommendation for this show and hope that A&E sticks with it and lets the people get more fleshed out as time goes on. It’s fun for anybody willing to give it a try.

Michael Durr has been reviewing movies for the better part of fifteen years now. He primarily enjoys thrillers, sci-fi, animation and even a little courtroom drama. His favorite films include Escape from New York, the Goonies and anything with Alyssa Milano. When he’s not praising Kurt Russell as the greatest actor of our time or scratching his head over a David Lynch flick, he’s spending time at home in Texas with his lovely wife, Lori and his amazing son. How they put up with him is a mystery, but even Basil Rathbone doesn’t have the time to solve that one.
Top Shot: Season 4 Lawless (Blu-ray)