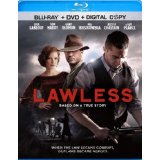 “In 1920 they passed the prohibition act making the sale of alcohol illegal. Well… at least it was supposed to be.”

I know what you’re thinking, and I was also incredibly disappointed to learn this film was not a biopic of Xena: Warrior Princess actress Lucy Lawless. (This hypothetical film would obviously star the ageless Kiwi, because the actress still looks incredible.) Fortunately, Lawless makes up for its startling lack of Lawless by being one of the better films I’ve seen this year.

Inspired by true events, this Prohibition-era tale follows the Bondurant brothers, a trio of successful bootleggers in Franklin County, Virginia. Franklin County is considered “The Wettest County in the World”, which is also the title of the 2008 historical novel by Matt Bondurant on which this film is based. There are plenty of TV shows (Boardwalk Empire, Justified) and movies (The Untouchables, Once Upon a Time in America and, um, Idlewild) that have used the Prohibition era as a backdrop or bootleggers as a plot point. However, the only movie I can think of that prominently features rural moonshiners is 1958’s Thunder Road, starring Robert Mitchum.

Jack (Shia LaBeouf) is considered the runt of the Bondurant litter. (Jack was also the real-life grandfather of author Matt Bondurant.) Fortunately for him, he’s in business with his two older brothers. Howard (Jason Clarke) is the oldest and carries psychological scars from serving in World War I, so he’s known to dip into his own product. Middle brother Forrest (Tom Hardy) is the imposing, soft-spoken leader of the operation. After surviving a brutal military attack during World War I and a bout with the Spanish flu, Forrest has also developed a mythic reputation for being immortal.

That aura of invincibility comes in handy when the Bondurants’ operation is jeopardized by a crooked new attorney general who wants a piece of the action. More specifically, the brothers are threatened by Special Deputy Charlie Rakes (Guy Pearce), the attorney general’s impeccably-groomed and sadistic enforcer.

Director John Hillcoat (The Road) and screenwriter/musician Nick Cave successfully fuse elements of the Western with components of the crime drama. The result is compelling and appropriately bloody. (The duo previously collaborated on The Proposition, a similarly brutal tale set in 19th century Australia.) Hillcoat once again displays an impressive eye for period detail — with an emphasis on grime and guns — and produces a handful of indelible images. I’m thinking of the poor soul who got tarred and feathered.

Then again, that guy probably got what he deserved for being mixed up in such a dangerous business. I don’t think I’m breaking any news when I say that Lawless features protagonists who are, objectively, not very nice people. As is the case with almost every crime drama (including many great ones), we are meant to root for them anyway. Lawless effectively takes the well-trodden path of making “law enforcement” more crooked than the criminals. However, it still felt to me like the film soft-shoed its way around some of the Bondurants’ more unsavory qualities. (Even Howard’s drunkenness is mostly played for dark comic relief.)

LaBeouf is much better suited to this sort of ensemble drama than he is swinging with monkeys in the jungle in Indiana Jones and the Kingdom of the Crystal Skull. (Even he agrees!) Not only is the actor more convincing as a weakling wannabe than he was fighting giant alien robots, but Lawless plays to his fast-talking strengths as a performer as Jack woos a rebellious minister’s daughter (Mia Wasikowska plays the slightly underwritten character) and tries to emulate flashy gangster Floyd Banner (Gary Oldman, making the most of very limited screen time). Even if you hate LaBeouf, this movie is your chance to see him get punched in the face repeatedly. So there.

Hardy, still carrying the Bane bulk from his role in The Dark Knight Rises, commands the screen without saying much. And when he does speak, it’s an approximation of a frog’s croak. Clarke, on the other hand, is a bit underserved as the third Bondurant brother. Jessica Chastain stands out in every possible way — from her red hair to her character’s fancy city clothes — as Maggie, a stunning Chicago showgirl looking for a quieter life in the country. (Chastain also stands out in the best possible way.)

Meanwhile, Pearce gives Benicio Del Toro’s enforcer in Savages a serious run for Greatest Scary/Funny (But Mostly Scary) Performance of the summer. Pearce is brilliant as Charlie Rakes, who stands out in the scariest way imaginable. At the very least, he confirmed something Whoopi Goldberg taught us a long time ago: people without eyebrows are terrifying.

Lawless is presented in its original aspect ratio of 2.35:1. The 1080p image is arrived at with an AVC MPEG-4 codec at an average 35-40 mbps. The solid bit rate provides a superior high-definition image presentation. The colors are subdued to the point where there is an almost sepia-tone throughout. It all fits in nicely with the period piece atmosphere the film does such a good job of building. Detail shines through, particularly in close-ups of the actors. Black levels might just be average, but what continues to cut through always is the film’s atmosphere.

The DTS-HD Master Audio 5.1 is dominated by the dialog. Hardy is still a little hard to understand at times, but you can chalk that up to the performance. His vocal inflections remind me of Billy Bob Thornton in Sling Blade. What really cut through here are the wonderful musical pieces that perfectly fit the time and locations. Surrounds are not really aggressive but do provide enough of an immersive experience here that it’s so easy to get pulled into the world of the film.

There is an Audio Comentary with Director John Hillcoat and Author Matt Bondurant. They spend a lot of time comparing the scenes with the book.

Deleted Scenes: (7:58) There are six with a play-all option. Nothing really to see here. This film contains a very tight edit, so you know everything left off was left off for a reason.

The True Story Of The Wettest County In The World: (21:33) This serves as both a making-of feature and a closer look at the source material. The film is based on the book by Matt Bondurant who is the grandson to Jack, portrayed in the film. He provides plenty of insight. Cast and crew also take you through the film’s main themes and characters.

Franklin County, Virginia – Then & Now: (6:11) Meet some of the folks who live there today. They have a few stories to tell as well. There are plenty of vintage photographs and even some nice original film footage.

The Story Of The Bondurant Family: (12:44) Again it’s Matt Bondurant who takes you through some photographs of the original people and tells us a little of their story.

The film loses a bit of steam toward the end thanks to a messy shootout and a coda that felt slightly tacked on. Fortunately, Lawless also boasts a terrific ensemble cast guided by a talented director telling a story dealing with a chapter of American history that’s been curiously underserved on the big screen.