Posted in: Disc Reviews by Jonathan Foster on March 11th, 2013 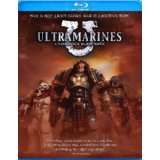 The above quote is the motto of Ultramarines, the best of the best of the Space Marines from the Warhammer 40,000 universe. The popular miniatures star in their first movie, a CGI action/adventure tale from Anchor Bay films. I admit — as nerdy as I am — I’ve never had any interest in the Warhammer figurines. Because of that, I wasn’t sure if I’d enjoy this movie. I was pleasantly surprised, then, when the story of the Warhammer universe and the Space Marines’ place in it was succinctly presented in the opening voiceover. Much like the opening crawl in Star Wars, it gives you just enough information to appreciate the story while wanting to know more.

When a remote outpost sends out a distress beacon, the Ultima squad of the Ultramarines — led by Captain Severus (Terrence Stamp, Superman II, Get Smart) — is sent to investigate. After they arrive on the planet’s surface, they find signs of a horrific battle. Pressing on toward the beacon’s location, they try to figure out what evil befell the planet and how to prevent it from reaching their home of Macragge.

The opening act gives you insight into this particular squad and how they interact with each other. These Marines have the typical gung-ho swagger one would expect from space jarheads, but these guys also have a deep, convicting faith, which is something I found refreshing. It gives them an extra depth and made these guys seem more real to me. Yeah, these guys are macho, but the piety and reverence they show sets them apart from the usual “Hulk smash!” type of military guy typically portrayed on film.

While the Marines as a whole are different from the norm, the biggest thing that bothered me about this film was the difficulty I had in telling the individual Marines apart. In uniform, only Severus and the medic are distinguished by their different clothes, and Severus only by the fact that he has some extra ribbons on his armor. Out of uniform, it’s almost as bad. Apparently, the artists only knew how to draw two face types: one for the rookies and one for the grizzled veterans. Both of these factors made conversations very confusing, because I wasn’t sure who was talking.

Speaking of the voice acting (pun intended), John Hurt’s (Hellboy, Alien) Chaplain Carnak and Stamp’s Captain Severus are easily identifiable (who can forget General Zod?), but the rest of the cast all sound the same, further adding to my confusion during some conversations. I discovered the reason for this in the credits. Out of a squad of 12, only three Marines had unique voice actors. Three people voiced the other nine. If any more Warhammer movies are going to be made, a little more individuality among the Marines would be great.

As good as Stamp and Hurt are (and they really shine here), the real star of Ultramarines is the action sequences. The battle scenes are what you’d expect from a war movie: loud, crazy and bloody. Yet director Martyn Pick does something really cool, something I wasn’t expecting from an animated film. He slows down certain points in the fights, a la 300. This technique, along with the brilliant visuals (more on that in the Video section), really immersed me in the battles. I practically felt every shot, slash and punch taken.

I’m curious to see where the Warhammer 40,000 franchise will go from here. While Ultramarines is a good stand-alone movie, there are many more stories to be mined from this universe. It would be a shame if they were left untold.

Ultramarines is shown with an aspect ratio of 1.78:1. The 1080p image is achieved with an AVC MPEG-4 codec at an average of 31 mbps. I have to say, this is one of the most visually stunning movies I’ve reviewed. Instead of white dots on a black background, outer space is presented as a series of layered hues, with black, blue, purple and even green showing up. The wide shots of the surface of the planet, while maybe taking a bit longer than I would have liked, look almost live action. This movie doesn’t skimp on the fine details either, with damage to armor and individual dust motes in a storm rendered with startling clarity. The blood spattering the “camera” was a nice touch as well and really immersed me in the battles.

The Dolby TrueHD 5.1 audio track was a double-edged sword for this movie. While I could usually hear every shot, scream and spoken word clearly, the music was not well balanced within this movie. While I liked the score, there were several times when it covered up dialogue and I had to turn on subtitles. (I dislike using subtitles, so this really irked me.) I also felt there were times when “danger music” was playing, yet there was nothing going on, but that may be just me. Overall, the audio is pretty good, with the battle scenes really coming alive when watched with surround sound.

Into the Void: Making Ultramarines: (30:40) An extremely in-depth look at how the movie came about, starting with the mythos of the miniatures and following development through to the reveal and a gaming convention. My favorite part was Stamp’s take on his character: “He’s basically Alexander the Great.”

Between Chaos and Darkness: The World of the Space Marines: (6:37) A brief history of the space marines.

Creating the Daemon: (1:51)  Director Martyn Pick discusses the transformation of the film’s villain.

Animated Graphic Novel — Ultramarines “Prequel”: (12:10) A very interesting graphic novel detailing a battle prior to the movie. It was cool to see what the Marines were referring to in the feature film.

If you’re a Warhammer 40,000 fan, the fact that the same company that makes the miniatures created Ultramarines will be enough for you to see this movie. For the rest of you, this is a really good animated film with a solid story and really cool battles. Sit through the slow opening and have a good movie night.