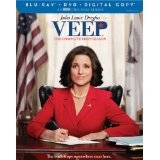 The great, central joke of Veep — HBO’s sharp, profane political comedy — is that no self-respecting politician aspires to become the Vice President of the United States. (Just like no self-respecting kid dresses up as Robin for Halloween.) It’s no accident the POTUS is completely MIA from the show, leaving his second-in-command and her beleaguered staff to deal with the countless indignities of a job described on “The Making of Veep” featurette as “so close to being important.”

A 15-second graphic at the opening of each episode tidily summarizes the failed presidential bid by Senate rising star Selina Meyer (Julia Louis-Dreyfus) and her subsequent acceptance of the show’s titular position. Veep follows Meyer as she carries out her day-to-day duties with the help of a team that includes devoted chief of staff Amy Brookheimer (Anna Chlumsky), sloppy director of communications Mike McLintock (Matt Walsh), clingy personal aide Gary Walsh (Tony Hale) — who may not be willing to take a bullet for Meyer, but he’ll definitely take a sneeze — and no-nonsense personal assistant Sue Wilson (Sufe Bradshaw). The staff often has to deal with smug White House aide/VP liaison Jonah Ryan (Tim Simons), who mentions that he works in the White House every chance he gets. By the end of the first episode, the team has also acquired ruthless deputy director of communications Dan Egan (Reid Scott), who will suck up to (or date) whoever he needs to get ahead.

Veep is created by Armando Iannucci, who also spearheaded the British government-skewering comedy series The Thick of It and directed that show’s equally caustic feature film spin-off In the Loop. His latest offering brings the same biting brand of humor; Veep works as a skewering of the political process and as a surprisingly broad workplace comedy. So while the eight-episode Blu-ray set features a season-long arc about VP Meyer’s Clean Jobs bill and subplots about filibuster reform, those storylines are offset by a pregnancy scare, a smiley Secret Service agent and Meyer’s accidental use of the word “retard” in public. There’s also swearing; lots and lots of swearing.

Don’t get me wrong: I actually appreciate a well-placed curse word more than most, and Veep has some of the most floridly foul language on television. The insults fly fast and (very) furiously, so don’t be surprised if you find yourself rewinding to catch or confirm what was just said. My problem isn’t with the quantity or the quality of the profanity, or believing that educated, high-powered people would actually speak this way. My main issue is that too many of the characters end up sounding the same. Iannucci has a talented team of writers at his disposal, but too often it sounds as if a single hyper-literate, profane person is writing in the same hyper-literate, profane voice for every character on screen.

It’s probably why I enjoyed Louis-Dreyfus’s standout (and Emmy-winning) performance so much, despite the fact that she’s not particularly (vice)presidential. Her self-centered Selina Meyer is a professional and personal mess, culminating in the season finale/“Tears” that satirizes the notion of a woman becoming more sympathetic when she cries. Louis-Dreyfus, however, has the requisite presence — which comes from being, arguably, the finest comedic actress working today — to lead this strong ensemble and rips into the R-rated material with the spirit of someone who’s been working within the constraints of network TV for the past 20+ years.

The rest of her staff is solid, if a bit interchangeable. Egan (impressively jerky), Chlumsky (unofficially reprising her In the Loop role trailing a powerful woman) and Walsh (remarkably reeking of loser-dom) often spout dialogue that could be said by any of those three characters. (Chlusmky, who broke out as a child star in My Girl, continues her exciting career reinvention.) Meanwhile, Hale brings the same dim sweetness to Gary that he brought to Buster Bluth on Arrested Development and Simons steals every scene he’s in whenever his annoying Jonah pops up. I do wish Iannucci had made these characters a bit more competent. I get that he’s going for comedy, but these people very quickly go from being hilariously bad at their jobs to unbelievably (in the strictest sense of the word) bad at their jobs. Meyer doesn’t even consider firing one of these clowns until way too late in the game. (Ep. 7/“Full Disclosure.”) You can’t make it so that both the VP and his or her staff are terrible at their jobs. (Right?!)

My favorite episodes of Veep came in the middle portion of its run, after the show settled into its comedic groove and I became accustomed to its wavelength. I particularly enjoyed Ep. 4/“Chung” (Meyer inadvertently insults a Chinese war hero), Ep. 5/“Nicknames” (the Clean Jobs bill storyline comes to a head and the episode ends with a blistering monologue about obese people) and Ep. 6/“Baseball” (Meyer suffers through a pregnancy scare and miscommunication while stranded at Baltimore’s Camden Yards).

Veep shrewdly makes a point of not revealing its characters’ political affiliations and of keeping the Commander-in-Chief out of sight. That allows these characters to stand-in for any number of buffoonish administrations. It also lets the Eisenhower Building — which houses the offices of the U.S. Vice President — to sub in for any workplace where the big boss is never around and the you-know-what rolls downhill.

Veep: The Complete First Season is presented in its original aspect ratio of 1.78:1. The 1080p image is arrived at with an AVC MPEG-4 codec at an average of 34 mbps. Right from the start, it’s obvious Veep isn’t going for the glossy, earnest look of The West Wing. The Blu-ray does a nice job of replicating the show’s intentionally muted, somewhat shabby color palette that very rarely pops. (The transfer is capable of a vibrant presentation; see Selina’s Meet the Press appearance in “Chung” for proof.) Overall, this is quite a sharp, pleasing presentation for a show that is a cut or two above Curb Your Enthusiasm — another relatively lo-fi, improv-heavy HBO comedy — in terms of visual ambition.

The DTS-HD Master Audio 5.1 track’s biggest job in most comedies is to convey the dialogue clearly. That task becomes especially important when you have as much overlapping chatter and as many muttered insults as there are in Veep. Fortunately, this DTS-HD is very well mixed and more than up to the task. Again, the most important thing in this show is the text, but that also leads to a few sloppy moments. Besides some awkward cuts where different takes were obviously spliced together, there’s a scene in the first episode when Selena and Gary hug, and Louis-Dreyfus is momentarily muffled because the mic wasn’t picking her up properly. As you can imagine, there’s not a ton of sub activity, though some busy office noises can be heard if you listen closely to the rears.

Audio Commentaries with Cast and Crew: The volume of tracks — 12 for eight episodes — is more impressive than the quality. Disc 1 includes two commentary tracks for each of the first four episodes: one features the crew along with star/producer Julia Louis-Dreyfus, while the other has supporting cast members joking around with each other. Iannucci and the writers seem to think Selina is somewhat more delusional than Louis-Dreyfus does. (The actress is protective of her character.)

The crew commentaries tend to focus on the production itself — which filmed its episodes in Baltimore, including one at Camden Yards — and Louis-Dreyfus (who grew up in D.C.) equates playing a prominent politician to being a famous actress. The chummy cast tracks are predictably looser, but still a bit informative. Disc 2 features one cast/commentary track per episode led by Louis-Dreyfus. I enjoyed how much the cast enjoys each other more than anything they had to say.

The Making of Veep: (13:24) A better-than-average backstage look at the show that includes interviews with the cast and crew. Right from the start, Louis-Dreyfus states she wanted to make a show about political behavior, instead of one about being a woman in Washington. Iannucci and his team talk about the mixed U.S./U.K. crew, building an exact replica of the VP’s offices in a Baltimore warehouse, and the inherent comedy of being Vice President of the United States.

Deleted Scenes: (24:52) With the freeness to improvise, there’s a lot of good/funny material here, even if it’s ultimately inessential. These quick-hit scenes aren’t presented individually; they’re presented by episode. Each episode is a separate chapter, but the Blu-ray only offers a Play All option.

Governor Chung Retraction and Outtake: (2:45) VP Meyer’s overly-verbose retraction (1:17) of a faux pas she made in the standout fourth episode, “Chung.” Also includes a funny in-character outtake (1:28) of an irritated Meyer making sure the retraction is perfect. Available on Disc 1.

Anti-Obesity PSA and Outtake: (1:54) Just like the Governor Chung retraction, this special feature includes a painfully earnest public service announcement (0:44) as well as VP Meyer’s profane outtake (1:10). The character’s irrational contempt for overweight people is one of the show’s best running jokes.

Veep returns for its second term season on April 14. While I wouldn’t put it on the upper echelon of HBO comedies quite yet, the show got better as it went along, so there’s definitely potential. If you’re a fan of political humor and (especially) profanity, give this one a spin. The eight episodes on this good-looking Blu-ray fly right by.