Posted in: Disc Reviews by Jonathan Foster on March 25th, 2013 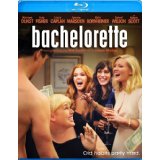 It’s tradition. The night before a wedding, the groomsmen throw a party for the groom and the bridesmaids do the same for the bride. Usually, the bachelorette parties are tamer than their male counterparts. Unless, of course, the bride has the absolute worst bridesmaids in the history of weddings; like the ones Becky (Rebel Wilson, Pitch Perfect, Bridesmaids) chooses for her bridal party in Bachelorette.

When Becky asks Regan (Kirsten Dunst, the Spider-man trilogy) to be her maid of honor, Regan immediately calls her other two friends from high school: airhead Katie (Isla Fisher, Wedding Crashers, Rise of the Guardians) and sarcastic Gena (Lizzy Caplan, Cloverfield, TV’s The Class). Completely enraged that “Pig-Face” — Regan’s cruel high school nickname for Becky — is getting married before her, Regan flips out. Fast-forward to the day before the wedding. Katie and Gena have flown in for the rehearsal dinner determined to liven up the “boring” bachelorette party, with Katie hiring a male stripper and Gena toting a purse full of cocaine. When the drugs and the stripper ruin the party, Becky storms off. Left alone in the bridal suite with champagne and cocaine, the three friends decide to get drunk, high, and generally feel sorry for themselves.

While wasted and making fun of Becky and her fiancé, they accidentally ruin her wedding dress. This sets off a chain of events that includes a trip to a strip club, sex with the groomsmen, and Katie overdosing on Xanax. The final moments before the wedding are tense as Regan tries to keep Becky, the rest of the wedding party and all the guests from finding out what went on the previous night.

Bachelorette is basically Bridesmaids minus the humor and the heart. I got the distinct impression the only reason Regan, Katie and Gena kept Becky around is that she made them feel better about themselves. It honestly didn’t make sense that someone as self-absorbed as Regan would consent to being a bridesmaid to someone she clearly feels is beneath her — as evidenced by her constantly interrupting Becky when she’s talking — let alone accepting the daunting title of maid of honor. The same goes for Gena and Katie, although that could be attributed to their respective drug use and ditziness.

I’ve never been a fan of Kirsten Dunst, and this movie is yet another reason why. Instead of displaying emotion on her face — like a normal person — she makes these weird expressions that suggest she’s having a stroke or is constipated (or maybe both). She does this at least three times that I caught, and it’s really off-putting. I don’t blame Dunst too much for this since, in the commentary, writer/director Leslye Headland claims she “loves that expression.” The other female leads aren’t much better. Isla Fisher’s ditzy Katie, instead of being adorable like her other not-so-bright characters in Wedding Crashers and Confessions of a Shopaholic, just comes off as unbearably whiny and annoying. Lizzy Caplan is probably the best casting choice of the three leads, having perfected the art of sarcasm as Kat Warbler on The Class. Unfortunately, the script doesn’t allow her or any of the other main characters any real development.

Fortunately, the supporting cast is absolutely fantastic. Rebel Wilson is adorable as Becky, blissfully unaware that her three “friends” couldn’t care less about her wedding. Becky is the only decent female character and, except for a brief moment of letting Regan yell at her, has more strength and class than her three bridesmaids put together. The groomsmen in this movie are hilarious. James Marsden (X-Men, Hairspray) is perfectly nasty as the misogynistic best man Trevor. Trevor is refreshingly open with his nastiness. He may be a complete jackass, but (unlike his female counterparts) at least he’s honest about it. Pot dealer Joe (Kyle Bornheimer, You Again) is the straight man, a groomsman completely confused by all the goings-on and a guy just trying to re-connect with Katie, his high school crush. By far, the best actor in this film is Adam Scott (TV’s Parks and Recreation), who plays Clyde. Clyde is the third groomsman and just happens to be Gena’s ex-boyfriend; the guy she claims “ruined my life.” Scott delivers just the right amount of snark and vulnerability around Gena, making him instantly likeable. Scott and Caplan have some pretty good chemistry (the only real chemistry in the film), and the few parts of the movie I actually laughed at had Clyde in them. Clyde’s hilariously bad rendition of The Proclaimers’ “I’m Gonna Be” is the real highlight of the film.

The final nail in this movie’s coffin is the lack of originality. In every scene during the trio’s quest to fix the dress, no matter what happens, at least one of the following things will occur: Regan will bully someone to get her way, Gena will do or snort something illegal and Katie will do or say something completely, heartbreakingly stupid. Every scene seems just like the one before it, just at a different location. Like I mentioned before, the main characters don’t develop at all and don’t learn anything by the time the end credits roll. As such, these ladies are completely unlikable and seem to just be perpetuating every negative female stereotype. With friends like these, who needs enemies?

Bachelorette has as aspect ratio of 2.40:1. The 1080p image is achieved with an AVC MPEG-4 code with an average of 28 mbps. The video is pretty good in well-lit or daytime scenes, but fails during night shots, including the dimly-lit strip club and the hotel pool scene. The pool scene is especially bad, as all it looks like is two watery shadows talking. This can’t be intentional, as Katie holds her hand up to the camera to show Joe a scar on her arm. Fortunately, the rest of the scenes — especially the wedding — look good. Very bright and colorful.

The DTS-HD Master Audio 5.1 track is the best thing about this movie. Everything is heard crisply and clearly, which for Dunst’s shrill, angry voice is not great. On the other hand, it’s fantastic for the soundtrack, which is mostly late ‘80s/early ‘90s music. I’m a sucker for music from this time period, so I was thrilled to hear The Proclaimers, Goo Goo Dolls, and Sheena Easton, just to name a few. Sadly, this is the only really good part of the Blu-ray.

Commentary with writer/director Leslye Headland: Warning!! Boring alert!! Most of Headland’s commentary is spent either talking about director commentaries on other movies or fawning over Kirsten Dunst.

Bloopers (1:53): A typical blooper reel of missed lines and goofy ramblings. Like the rest of the film, not funny.

Behind the scenes of Bachelorette (4:33):  The three leading ladies talk about how much they love the movie and working with each other. I didn’t see this “depth of character” Dunst claims Regan had.

It’s a sad state when your supporting cast is much funnier than your leads. If you want to watch a female version of The Hangover, go watch Bridesmaids instead and save this turkey for Thanksgiving.