The Good Wife: The Fourth Season

Posted in: Disc Reviews by William O'Donnell on August 25th, 2013 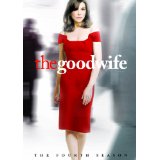 Chicago Law firm Lockhart & Gardner is facing bankruptcy so each attorney works harder to reel in high profile clients so that they can save themselves from being sold, or shut down. Meanwhile Alicia Florrick (played by Juliana Margulies), who is an attorney at this firm, is caught amidst her husbands election campaign for the office of governor, as well as the temptation to become either an Equity partner in her current firm, or leave to be a name partner in a brand new one.

The fight against bankruptcy eats up at least half a season’s worth of storytelling. I’ll confess that I find it a bit hard to root for people that talk in terms of millions of dollars, and never have to relinquish their luxurious homes or lifestyles at any point during their struggle to lose their debt. Thankfully the trustee appointed to aid them is played by more subdued by still very charming Nathan Lane, and the cases the attorneys take on during their duress get increasingly engrossing. Said cases keep their topics very current with political references like the gun control debates and the actions of Anonymous (the protest group) becoming key issues.

Every single character wants something from everyone else and the connections between everyone becomes a rather dense web. Politics are frequently the catalyst for friendships to turn venomous, especially with a major election lasting from the season opener right to the finale, and the courtroom often gets used to resolve the stickiest of problems. This is when the guest stars get to shine. Instead of the various judges or prosecutors being forgettable drones, each has their own set of quirks, such as Michael J Fox playing an attorney who is not ashamed to use his physical handicaps as a method of gaining sympathy or pity from a judge. Lockhart & Gardner is a firm of defense attorneys and they are frequently thrown through a loop when having to adjust their strategies to counteract such tactics by their opponents. It makes for a more interesting courtroom dynamic and helps to hold interest instead of relying on sexiness or overuse of the term “objection” to gain attention (granted, the latter two are used a fair amount as well).

Many of the subplots affecting mostly supporting characters gel well with the rest of the show, such as the controversy over an attorney leaving the firm and taking major clients with him, while others fall a bit flat. I, for one, got tired of the kinky relationship between the firm’s top investigator Kalinda (played by Archie Panjabi) and her criminal husband. For the longest time the problems they have enter a stalemate that loses its sexiness at the first frame. It is an aimless and uncomfortable distraction from better storytelling and I was more than pleased to see it disappear.

Widescreen 1.78:1. The colours in a courtroom (or meeting room) tend to be pretty drab, but what colour does show up is not faded and there is no haziness to note.

English Dolby Digital 5.1 and 2.0 are available. The menu screen is far too loud. It does not balance with the volume of the episodes. And without a “play all” option, I am forced to fumble with the remote when each episode finishes to avoid a blast of sound.
Within each episode is clear dialogue, which is about the only thing you’ll need to worry about since there is next to no music and very few environmental sounds (aside from a couple crowd scenes during political rallies).

Deleted scenes: Each disc has scenes cut from select episodes. Most of these are added moments of tension cut for time purposes (mostly).

Standards & practices: Sex and The Good Wife: This featurette details the sex scenes and the challenges the producers face with the network censors. The directors talk about the creative ways they try to apply the sexual tension in some more subtle ways that conform to censors wishes but still give plenty of implications that our imaginations can run with. Much of this is demonstrated with footage they shot compared with what eventually aired.

The Ties That Bind: A look at the supporting characters who had the greatest effect on the main plot, and their own arcs within this series. Supporting actors like Chris Noth, who plays Alicia’s husband Peter Florrick) get more focus than other as his character covers many season with his fall and eventual redemption
There are many nods to the many guest stars this season contained.

Style Evolution: The Fashion of The Good Wife: I’m going to be honest. Costume Designers are the masters of delusions of grandeur Yes, Daniel Lawson, who works on this show, is clearly a very talented Costume Designer, but I can’t stomach hearing the bluster about his many self-congratulations as well as his so called methods of helping to “tell the stories.” I’m sorry but Costume designers are not directors or screenwriters and being a competent worker does not make you the weaver of stories. Nice outfits though…very sharply dressed attorneys…

Seat of Power: Directing The Good Wife: I’m not sure if it’s just me, but it seemed like any director who was not co-creator Robert King did not command all that much respect on set. There was talk of a director not being a “taskmaster” and to simply attend to whatever choices the actors give themselves. Certainly sounded alien to every other director experience I’ve heard of.

This season doesn’t exactly end on the same sort of cliffhanger that previous seasons had. Still, there are more than enough questions audiences will want answered, and this show has proven worthy of returning for said answers.