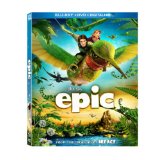 Any story about a hidden world that exists just outside the view of human eyes is bound to fire up your imagination. It helps explain why the Toy Story movies and Monsters Inc. are some of the most beloved family films of the last 20 years. Epic — the latest offering from Blue Sky Studios — seeks to capture some of the inventive magic of those Pixar films, but too much of the movie winds up playing out like a generic hero’s journey. Thankfully, there are still plenty of things to like in this animated hit, which suggests there’s a big world of little people out there.

“Many leaves, one tree. We’re all individuals, but we’re still connected.”

Teenage Mary Katherine (voice of Amanda Seyfried) reluctantly moves in with her eccentric scientist father (Jason Sudeikis) following the off-screen death of her mother. Unfortunately, M.K.’s well-meaning father doesn’t pay much attention to her because he’s consumed with a crackpot theory about a tiny civilization that exists in the forest that surrounds his house.

Of course, the craziest part is that he’s absolutely right! Epic introduces us to the world of the Leafmen, who are led by Queen Tara (Beyoncé Knowles). Their job is to protect the forest from the wicked Boggans and their leader, Mandrake (Christoph Waltz), who wants to replace the lush greenery with rot. After a devastating Boggan attack, Queen Tara shrinks M.K. down to size and charges her with delivering the pod that contains her heir to safety. Luckily, M.K. is not alone on this journey: she’s accompanied by brave, humorless Ronin (Colin Farrell), rebellious Nod (Josh Hutcherson), and the wisecracking slug/snail duo Mub and Grub (Aziz Ansari and Chris O’Dowd). Together, they have to preserve the life of the forest by ensuring the pod doesn’t bloom in darkness.

The film — loosely based on the William Joyce children’s book “The Leaf Men and the Brave Good Bugs” — is directed by Chris Wedge, who helped launch Blue Sky Studios’ animated feature film division with 2002’s Ice Age. (He also voices Scrat, the breakout character from the Ice Age franchise.) Epic looks and sounds fantastic — more on that in the Video and Audio sections — but the script comes up a bit short.

The movie is at its best when it’s relating the miniature world of the Leafmen to the oblivious humans. The Leafmen, for example, move and speak a lot faster than humans due to their diminutive size, so they refer to humans as “Stompers” and mercilessly mock M.K.’s plodding dad. Moonhaven and Wrathwood — the respective homes of the Leafmen and Boggans — are also brought to vivid life and feature fun details, like the Leafmen riding hummingbirds into battle or Mandrake’s cape being fashioned from bat fur.

Unfortunately, I don’t think Epic went far enough with these sorts of quirky, inspired touches. There are funny, throwaway bits involving the short lifespan of a fruitfly and the viciousness of seemingly adorable rodents, but the movie mostly winds up playing it safe and overly familiar when it comes to its main story. At the end of the day, you know Nod is going to be less rebellious, Ronin is going to lighten up, and M.K. is going to reconnect with her dad. I realize this film is mostly meant for children, and the comfort of predictability is a big part of its appeal. However, Epic doesn’t really arrive at these pre-determined conclusions in innovative or interesting ways.

Instead, the filmmakers seemed to hope an eclectic voiceover cast would keep the adults distracted/engaged. Casting well-known celebrities in animated films can work when it’s not completely used as a crutch. (Remember Shark Tale? Neither do I.) Epic’s casting isn’t quite that egregious, and some of the voices actually work quite well. Seyfried and Hutcherson may not really distinguish themselves, but I enjoyed the mock-seriousness Farrell brought to a line like, “Where there’s mice, there’s bound to be…chipmunks.” Ansari and O’Dowd make for a funny duo, but they’re not making anybody forget about Timon and Pumbaa.

Then there are the more out-there casting choices. Beyoncé is practically pop royalty, so she was actually an inspired choice to play Queen Tara. She’s joined by the likes of Steven Tyler(!) as a wise, gregarious caterpillar(!!), and Pitbull(?) as a shady frog. Out of those two, Tyler actually acquits himself quite well and is a breath of fresh air in the film’s middle act. As far as Pitbull is concerned; if nothing else, the sight of two-time Oscar winner Christoph Waltz and Mr. Worldwide (sort of) sharing the screen got a chuckle out of me.

Epic is presented in an aspect ratio of 2.40:1. The 1080p image is arrived at with an AVC MPEG-4 codec at an average of 28 mbps. The only negative I can come up with is that I’m a bit bummed we didn’t get to review this film in 3D. But even that’s not much of a drawback because this clean, two-dimensional Blu-ray image is fantastic

The film grabs your attention right from its photorealistic opening shot of a forest. The character design and the rest of the film wind up being more on the stylized side, but Epic doesn’t lose its ability to transport us to the worlds of Moonhaven and Wrathwood. Colors are impossibly vibrant, with green obviously taking center stage. The Blu-ray is equally impressive when presenting the dreary world of the Boggans, giving us excellent separation in black levels and fantastic texture on close-ups. Speaking of those close-ups, the amount of detail Blue Sky’s animators devoted to each character — M.K.’s freckles, the curve on each petal of Queen Tara’s skirt — comes through brilliantly.

The DTS-HD Master Audio 7.1 track actually outdoes the terrific visual presentation, in my opinion. The forest is brought to life in dynamic and subtle ways thanks to the way sound travels across all channels. More impressively, these immersive sound effects — the fluttering of hummingbird wings; the squeaking of bats — still have a place in the sound field when the action kicks in and Danny Elfman’s score takes center stage. Subs also come to life in surprising ways; they mostly serve to punctuate the whooshing effect of flight. In short, there’s a lot going on here and this track balances it all expertly.

All of the bonus material is presented in HD. During its first play-through, the Blu-ray’s menu features Mub and Grub amusingly riffing on the disc’s special features. Speaking of which…

Birds, Bugs and Slugs — Forest Explorer: (5:21) An educational look at the real-life birds, plants and insects that inspired the characters in the film. The message here is for kids to go outside and encounter all this wildlife in person.

Rot Rocks: (3:18) A somewhat sympathetic look at the film’s villains, this mini-doc explores the necessary role of rot in our ecosystem. I’m pleasantly surprised to see something this un-adorable among the bonus material.

Bugs of Camouflage: (3:44) Pretty self-explanatory, but this featurette examines the way bugs — including some of the ones featured in the film — blend into their environment.

The Epic Life at 2 Inches: (3:42) This mini-doc purports to shrink the viewer down to two inches, the same height as the heroic characters in the film. In reality, it’s an amusing exploration of the film’s physics, including the science behind the Leafmen’s heightened strength and agility.

Mysteries of Moonhaven Revealed: (24:39) Seven featurettes exploring the film’s setting and standout characters like Queen Tara, Nim Galuu (Steven Tyler), the Leafmen and more. The most interesting mini-doc is the first one — “The World” — which covers the project’s origins. It’s here that director Chris Wedge talks about his philosophy for creating animated features: he thinks about a world that can’t be seen any other way, except through animation. Knowles, Ansari and O’Dowd pop up to discuss their characters. (Sadly, Tyler is absent from the “Nim Galuu” featurette.) Features a Play All option.

This past summer, the box office was crowded with high-profile family film offerings. Despicable Me 2 and Monsters University hit, while Turbo was somewhat of a misfire. Meanwhile, Epic sort of slipped in under the radar (to the extent a movie that grossed $100 million in the U.S. and topped $250 million worldwide can slip in under the radar).

So if you didn’t get a chance to check this one out when it was in theaters, this dazzling Blu-ray gives you the opportunity to peek in on the tiny world of Epic. Just don’t be surprised if your young one starts looking extra closely at flower petals or blades of grass in search of Leafmen.