Posted in: Disc Reviews by Gino Sassani on September 17th, 2013 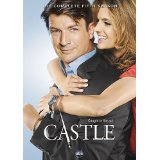 Rick Castle (Fillion) is a very successful mystery pulp-fiction writer with over 26 books hitting the best seller list. He’s rich, and he’s spoiled. He lives with his mother (Sullivan) who is pretty much a has-been actress who thinks she’s just one part away from stardom. He has a young teen daughter (Quinn) who is more responsible than he is. After having so much fun and inspiration tracking down his fiction copycat killer, he decides to pull strings and become an unpaid consultant for the team. At first that wasn’t so good for team leader Detective Kate Beckett (Katic). Of course, now the whole sexual tension thing has been discarded, and they are an official couple these days. The team is also filled by a pair of detectives. Detective Javier Esposito is played by Jon Huertas and is the macho member of the team. Detective Kevin Ryan is played by Seamus Dever and is the more reserved member of the team, now trying to start a family. The team is led by the rough Captain Victoria Gates, played by Penny Johnson. She likes to think she’s in charge, but she’s not.

For the romantics in the crowd, the highlight of the season is watching the awkward romance between the two play out. It’s all there: The first Valentine’s Day, dinner with the parents, jealousy, and of course a lot of sleeping together. For some of us all of that merely serves as a distraction to the real reason we watch the show. It’s the cases and the Castle/Beckett dynamic solving them that makes the show work on multiple levels. It’s also the show’s tendency toward odd cases that get Castle all fired up that usually end up a bit more mundane than originally advertised. It’s a good formula, because it’s not the solution that matters here. It’s the journey all the way.

You get plenty of that in the 5th season. The Final Frontier is one of those rich episodes with all of the important elements. Fillion throws out a nod to the Firefly fans with a remark about making a movie based on a failed sci-fi series with only about a dozen episodes. The episode involves a murder at a sci-fi convention, and that means plenty of crazy costumes and even crazier suspects. The show also includes lovable Quark actor Armin Shimerman and is directed by Jonathan Frakes.

Swan Song involves the death of a rock star, but the team is too busy mugging for the cameras to concentrate on their jobs. A documentary team was following the band, and now they’ve gotten permission to follow the investigation. It’s a different style to the show as we get shaky camera work and a more outside-of-the-characters point of view in the storytelling.

The mid-season heats up with the kidnapping of Alexis in the rare two-part episode. This one turns much more serious and mimics much of the action of Taken. James Brolin stars as a surprising character that I suspect we’re going to see again. It’s a good background story for Castle, giving us some real looks at why he became a writer. It also gives Fillion a chance to break out of the silly for a short time and get tough.

Scared To Death is a golden episode for horror fans. A woman appears to have been scared to death after watching a mysterious DVD that predicts the viewer’s death in three days. Of course, Castle ends up watching the film. If any of this sounds familiar, it should. It’s basically The Ring, and the show often references the horror film. Castle believes in that sort of thing and starts going over his bucket list throughout the episode. It all begins more like an episode of Supernatural than Castle, and I should know, I’ve watched both complete seasons within just the last week. Castle turns to his good friend Wes Craven for answers. The only thing missing here was Freddy himself.

The Lives Of Others is a significant episode, indeed. It’s the 100th episode of Castle and mimics the master of suspense himself, Alfred Hitchcock. It’s Rear Window when Castle is in a wheelchair with a broken leg. He’s bored and hasn’t had a mystery to solve in weeks. He starts spying on the neighbors with a pair of binoculars and believes he’s just witnessed a murder. Many of the classic film’s elements are repeated here, some almost beat for beat. The ending’s a bit of a nice twist, and it certainly sets itself apart for the show’s centennial celebration.

Finally, Fast And The Furriest gives Castle the case of a lifetime. All signs point to murder by none other than Bigfoot. It’s Castle at his best as he becomes positively giddy over the prospect of busting the elusive beast.

The season does find a low point and offers the dreaded clip show toward the end of the season. There’s a cliffhanger, but it won’t be the life and death struggle the show usually ends the year with. There’s no doubt that the shape of the show appears headed for some pretty big changes no matter which way this goes when the show returns soon to ABC. You don’t have a lot of time to get caught up. This release is the best way to be ready.

Each episode of Castle is presented in its original 1.78:1 aspect ratio. Even on DVD these newer shows are all starting to look, on the average, a lot better. With high-definition broadcasts and preparing for the Blu-ray market, the picture on these things is getting better. Colors and sharpness are all well above normal. But … you knew there had to be one. There’s still too much stuff on a disc. I continue to believe four episodes on a disc are too many. With discs themselves costing the industry almost nothing, I push for higher bit rates. Compression artifact, that’s the only enemy here, and it is nearly completely unnecessary.

The Dolby Digital 5.1 track is not really anything to write home about. This is a very dialog-heavy presentation, so you can expect everything to be front-loaded here. It’s all clean and clear.

Martha’s Master Class: (7:51) This mockumentary features the character of Martha going over key points of the 100th episode as if it had actually happened.

Your Home Is Your Castle: (22:28) An architect visits the sets of Castle and talks about the various designs and dressings.

Lot Cops: (12:15) Seamus Dever and Jon Huertas show off the training they do to act like real cops. It’s actually all played for laughs and a lot of fun.

I know there are fans out there who take the show pretty seriously. The DVD’s aren’t the only way you can get into the show these days. Castle has become a world all on its own. You can now buy actual mystery books in the Heat series written by “Richard Castle”. There is a game and even a Marvel comic book series. Next thing you know they’ll be The Castle Experience at Disney World. “So you’re seriously considering this?”

Gino Sassani is a member of the Southeastern Film Critic's Association (SEFCA). He is a film and television critic based in Tampa, Florida. He's also the Senior Editor here at Upcomingdiscs. Gino started reviewing films in the early 1990's as a segment of his local television show Focus. He's an award-winning recording artist for Omega Records. Gino is currently working on his 8th album Merchants & Mercenaries. Gino took over Upcomingdiscs Dec 1, 2008. He works out of a home theater he calls The Reel World. Favorite films: The Godfather, The Godfather Part II, The Body Snatcher (Val Lewton film with Karloff and Lugosi, not the pod people film), Unforgiven, Gladiator, The Lion King, Jaws, Son Of Frankenstein, The Good, The Bad And The Ugly, and Monsters, Inc.
The Black Waters of Echo’s Pond (Blu-ray) The Vampire Diaries: The Complete Fourth Season (Blu-ray)