Posted in: Disc Reviews by Gino Sassani on October 11th, 2013 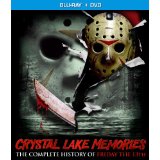 What a great time it was to be a teen in the late 1970’s. No, I’m not referring to disco music. It was a great time to go to the movies. It was the culmination of the perfect date, and Hollywood was riding the beginning of a trend that remains alive and healthy today. I’m talking, of course, about the slasher film. You could argue that Hitchcock started the ball rolling in 1961 with Psycho, but it would be decades before that film would find its true audience and plethora of imitators. Although The Texas Chainsaw Massacre and Halloween came before Friday The 13th, can it be argued that any horror film franchise is as widely known? The truth is that even the man behind the film, Sean Cunningham, never really knew what it was that he had. It was never his intent to follow the film with a barrage of sequels. He also scoffed at the idea that Jason could become the centerpiece for future films. By now Jason has become such an iconic character that there is an entire generation out there that doesn’t know that Jason wasn’t the culprit in the first film. Jason’s stature has reached the heights of the classic monsters of the Universal days. While some of us hesitate to put his name and hockey mask up there with the likes of Frankenstein, The Wolf Man, Dracula, and The Mummy, the recognition and sheer dollars generated make it difficult not to. By the beginning of the 1980’s names like Jason, Freddy, and Michael Myers would be scaring audiences around the world, rendering the classics somewhat silly in the eyes of a more visceral generation of teens.

Here we are almost 25 years removed from that first Friday The 13th film and the franchise has racked up nine sequels, one remake, a television series and a team-up film with Freddy Krueger…oh my. Of course, not all Friday The 13th projects are created equal, and the debate rages on as to what constitutes official canon for the franchise. Certainly, the television series can be discounted, because it had really nothing to do with the films at all. The title was merely used to cash in on the fans. Still, it managed to last three years and has developed a somewhat cult following of its own. But whatever you consider part of the “true” franchise, it’s all found in one place.

That place is the outstanding documentary: Crystal Lake Memories. Corey Feldman narrates the documentary that covers every incarnation (so far) of the infamous franchise. Each chapter in the film explores a chapter in the history of the franchise. That includes the television series, the remake and the Freddy vs. Jason entry. The pieces do not merely gloss over the films with stuff we already know. No, these are the guys who brought you the one on the Nightmare On Elm Street series called Never Sleep Again. The film runs an impressive 400 minutes, which just so happens to be 6.66 hours, if you’re keeping score. The segments range from 45 minutes to about 20 minutes for the less important titles.

Of course, running time is just a waste of time if you do not deliver the goods. While I might have liked another narrator, Feldman does an OK job. The truth is that he’s merely there to talk us through the timeline and synopsis of each segment. The real meat here is the hundreds of participants they managed to interview about these films. Just about everyone who was involved in a Friday The 13th and is still alive shows up on this thing. Yes, there are notable absences. Some actors like Kevin Bacon appear intent on forgetting they were ever in one of these films and so do not appear. Still, I’m very impressed by the sheer number of people they did get to talk on camera. It’s not all love-fest crap, either. They talk about the mistakes and about the people who were crap to work with. Some of them pull no punches at all. I get the sense that, for some, this was like therapy and they were finally getting crap off their chest. Many of the female actors address the subject of nudity in the series. Many were completely fine, while others did feel some pressure and refused to go all the way for the films.

The documentary freely admits that there were stinkers in the franchise, and the material here often explains just why some of them did stink up the joint. It was never any secret that the MPAA has had it in for the genre pretty much since it began. In Psycho, Hitch had to fight just to show a toilet. It’s hard to believe that films were not allowed to show them before that time. Here it was the sex and kills that drew the ire of the board. The franchise was almost constantly threatened with an ‘X’ rating, which would have made the film financially unfeasible. Cuts had to be made, and we never really got to see any of these films the way they were intended. I would love to see all of these decades of kills in their original form, but that’s never going to happen. Most of that footage was permanently discarded. There is some surviving footage here, but it’s in terrible shape, and the audience is victimized by the MPAA more than any camper was from Jason. It really does make me a bit angry to see just how bad this fight was and what has been lost to us in its wake.

More than censor cuts, we get a glimpse of the Fridays that never were. I was intrigued by many of the scripts or ideas that were never made for one reason or another. Frank Mancuso, Jr. offers some of the most stabilizing information here. He was involved with the series pretty much up until the time the rights were split between the title Friday The 13th and the character of Jason. That’s why the last 2 “official” sequels did not use the Friday moniker. Jason Goes to Hell and Jason X were not allowed to use the original name, even though the number system makes it clear that they were following the series continuity, such as it always was.

You’ll never see this many interviews in one place again. Many are quite playful. Some of the cast members return to the original locations and even act out their scenes once again. And while I’m not sure that the uber-fans will actually learn anything new here, it’s all collected in one place, and it’s worth the price of the release just on that virtue alone.

Crystal Lake Memories is presented in its original aspect ratio of 1.79:1. The 1080p image is arrived at with an AVC MPEG-4 codec at an average 25-30 mbps. The image quality isn’t important. This is a documentary and that means running the gamut from incredibly crappy (outtakes and behind-the-scenes footage) to sharp and crisp (the new interview footage).

This is strictly a Dolby Digital 5.1 track. No bells. No whistles. If you were looking for that, you missed the whole point of this being a documentary.

There is an Audio Commentary by Director Daniel Farrands, Author Peter M. Brake and Editor Luke Rafalowski. There’s new information to be gained here. It’s like getting 13 hours instead of 6 1/2. You can hear the passion, and it’s infectious.

Jason continues to stalk our nightmares, and it’s a safe bet that the Friday The 13th story is far from over. Who knows where it will go from here? I like to consider this as an epilogue, of sorts, to this era in the story. It’s as complete as you could hope for. The amount of work that went into this was an obvious labor of love. These guys are fans just like us, and they delivered. You don’t even have to be a fan of the franchise or even the genre to appreciate this material. There’s an academic aspect to this that can’t be ignored. Love him or hate him, Jason has made his mark on our culture that isn’t going away. “No one would ever look at a hockey mask the very same way again.”

Gino Sassani is a member of the Southeastern Film Critic's Association (SEFCA). He is a film and television critic based in Tampa, Florida. He's also the Senior Editor here at Upcomingdiscs. Gino started reviewing films in the early 1990's as a segment of his local television show Focus. He's an award-winning recording artist for Omega Records. Gino is currently working on his 8th album Merchants & Mercenaries. Gino took over Upcomingdiscs Dec 1, 2008. He works out of a home theater he calls The Reel World. Favorite films: The Godfather, The Godfather Part II, The Body Snatcher (Val Lewton film with Karloff and Lugosi, not the pod people film), Unforgiven, Gladiator, The Lion King, Jaws, Son Of Frankenstein, The Good, The Bad And The Ugly, and Monsters, Inc.
90210 – The Final Season Contest: Win The Complete First And Second Seasons Of Mama’s Family