Posted in: Disc Reviews by William O'Donnell on November 13th, 2013 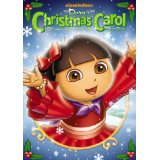 Charles Dickens’ Christmas Carol is vastly re-imagined with characters from Dora. Swiper replaces Scrooge as the one who travels through time in order to learn the true meaning of Christmas. This special is twice the length of a normal episode.

Music and singalongs have always been a part of the Dora the Explorer experience but this particular special is formatted more like a typical children’s musical. There are fewer moments where the characters do that unnerving pause in anticipation of the audience to talk to the television, and more time spent on songs. Sometimes they merge the audience participation/pausing moments with the music during a reoccuring tune about swiper not swiping. Repetition is a staple of children’s programming…it can also be a device that forges madness in the mind of adult viewers.

Aside from stretching things out to a longer length with additional story and musical numbers, this special would seemlessly fit amongst other Dora episodes. Fans will not be turned off by it whatsoever and parents can rely on it for 55 minutes of distraction.

Fullscreen. There is a lot blurring whenever there is character movement or the screen pans over to a new shot.

This is not as clear as previous Dora DVD releases. This is a rare slump for Nickelodeon, who normally release bright and pristine looking cartoons.

Dolby Digital Stereo in English and French. The sound seems acceptable. Having sounds occur in the surrounding speakers is not a necessity or even desired since the audience is meant to be drawn into participating with the screen.

Young People’s Choir Behind-the-Scenes: A short featurette showing the creation of a Christmas version of the Dora theme song. A children’s choir is the centre of the big holiday sound.

This special holiday package comes with a colouring book, crayons, stickers and a poster.

With all of the materials that come with the DVD, this makes an ideal Christmas gift for any pint-sized Dora fan. You may consider picking it up before Christmas so that they can be distracted leading up to the holiday, just sayin’.