Posted in: Disc Reviews by Jeremy Butler on November 18th, 2013 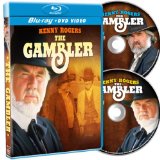 Kenny Rogers…chances are that is a name you have heard throughout your life regardless of whether you are a fan or not; regardless whether you have ever heard any of his music, which happens to be the case when it comes to me. His name just has a way of sticking with you, and that can be doubly said of his song “The Gambler.” See, even now I bet the mere mention of the song’s name has the chorus of “You got to know when to hold ‘em, know when to fold ‘em,” playing in your head. Well, here is the film version for Rogers’ most infamous song; however, I doubt that the movie will have the same effect on you as the song.

The first in a series of five television movies (so far; there is talk of a sixth addition being in the works), in The Gambler, Kenny Rogers plays Brady Hawkes, a veteran card player with a magnificent beard and a stellar reputation as one of greatest gamblers ever to live. Despite making his living in the cutthroat world of gambling, Brady possesses a strong sense of morals evident in his constant intervention in affairs that have nothing to do with him, which is essentially what begins our story: while playing a high-stakes game on the other side of the country, Brady receives a letter from a son he never knew he had, alerting him that the boy as well as his mother are in a bad way with a local crime boss.

Dropping everything, Brady makes way to his son any way he can, first by horse and ending up on a train. Despite having plenty on his mind, Brady becomes involved the problems of his fellow passengers ranging from saving a young hotshot (Bruce Boxleitner) to helping a damsel fend off unwanted advances. In between solving other people’s problems he encounters his son who has been making his way to his father, and together the two journey to rescue his mother.

I’m not sure what I expected from The Gambler, but it’s not what I got; I know that much. That is not an indictment of the film, simply a statement of fact. There just seemed to be too many things occurring at once; the story needed to be simplified. Too many moving pieces, I guess is the best way to put it; each character appears to have his own individual story, and they are stealing focus from one another: You’ve got Brady meeting the son and seeing if he can help him and his mom get out of the bind they’re in which is a whole other storyline in itself, then you’ve got the young headstrong lad Billy Montana played by Boxleitner, desperate to leave his mark on the world, as well as another situation involving a fellow passenger on the train. My suggestion would be to remove the storyline of the fellow passenger and make the story primarily focused on Brady’s situation.

I also didn’t feel enough focus was put on the Brady Hawkes character; even now I do not feel I got a real sense of the character. A majority of the audience’s interaction with the character came from him inserting himself into other people’s messes; however, we don’t know why he feels the need to get involved at all.

Another flaw probably was the overall pacing, which was kind of slow. More than half of the movie is spent on the journey to the town. By the time the characters have reached their destination, there isn’t much time left in the film. Though there was plenty of action during the journey including fights, pistols, and card games, the movie would have benefited from a more rapid pace.

The Gambler is presented in an aspect ratio of 1.78:1. The 1080p image is achieved with an AVC MPEG-4 codec at an average of 24 mbps. All in all, The Gambler was a good transfer; there is minimal grain visible through most of the film, most noticeable in the background of the opening sequence as well as a few scratches on the print also during the opening sequence. However, other than that, the overall picture quality was impressive; picture was clear though not necessarily crisp. Whether the image has been improved? I would say yes in every aspect except one: the color scheme which in my opinion remains tame and a bit dull, but that was somewhat expected given the time period that the film was originally shot in.

The sound quality for Dolby Digital 2.0 stereo audio track transfers well; I wouldn’t go as far as to call it an immersive experience, but the dialog and background music are mixed quite well without either stealing focus from the other. There weren’t any big explosions or things of that nature to really showcase its ability, but it still performed well with what it had. The characters’ speech was very clear without needing to crank up the volume. Soundtrack: the most notable thing about it is the addition of titular song during the movie’s opening sequence; other than that I didn’t notice it much.

No Special Features were included on this disc.

As I said above, I think the movie would have gone over a lot better had a lot of the individual character points of view been simplified. There are only so many pieces of the pie to go around. It’s important to make sure the focus stays on point; otherwise we do not end up with a full picture.

Jeremy Butler is a film school graduate of the International Academy of Design and Technology. He is been writing for Upcomingdiscs since 2012; however, movies have played a big part of his life for much longer. Favorite genres include horror, science fiction/fantasy, and comedy. Favorite movies are V for Vendetta, Boondocks Saints, Kiss Kiss Bang Bang, and The Godfather.
Parkland (Blu-ray) Saga: Spin It Again! — Live in Munich (Blu-ray)