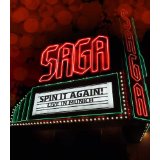 I’d honestly never even heard of Saga before popping in this Blu-ray, but it was impossible to miss the family reunion atmosphere of this show. The Canadian prog rockers released their self-titled debut album in 1978, but — like many successful, long-running bands — have undergone a number of lineup changes. (Including a non-lethal, Spinal Tap-esque run of drummers in the early part of this century.) Saga, in its various forms, has found some of its greatest success in Germany, so there was no better place to get the band back together for a concert movie.

Spin It Again! Live in Munich was filmed in November 2012, capturing the end of the band’s 20/20 Tour through Europe. Saga currently consists of Michael Sadler (vocals, keyboards), Jim Gilmour (keyboards, vocals), Ian Crichton (guitar), Jim Crichton (bass/keyboards) and Mike Thorne (drums). This was Thorne’s first tour with the band, but the rest of the lineup has been a part of Saga since the late 1970s. Sadler, who left the band at the end of its 2007 tour citing family reasons, announced his return in 2011. It’s a good thing for fans.

Again, I’d never seen these guys prior to this concert film, but I have a hard time imagining another lead singer recreating the panache and easy rapport Sadler brings to the stage. Saga take to the stage and immediately start rocking out with show-opener “Anywhere You Wanna Go.” The band’s music is as propulsive and occasionally theatrical as its lead vocalist.

The other members of Saga get their turn in the spotlight too. Moreso than Sadler’s voice, I’d say the band’s defining sound is actually Ian Crichton’s insane guitar riffs. Meanwhile, Gilmour and Sadler share vocals on the melancholy “Time’s Up,” which ends with Sadler conducting a lively audience sing-along. Gilmour also gets a showcase/unofficial keyboard solo in “Scratching the Surface,” while drummer Mike Thorne gets his own solo earlier in the show.

Some of the largely instrumental tracks lead nicely into one another, but a few of the show’s best moments involve Sadler and other band members getting on the mic to briefly express appreciation for their hyper-devoted fans. Sadler even playfully teases the audience by asking what they want to hear next and playing a few snippets, before eventually launching into “Tired World (Chapter 6).” With another European tour scheduled for 2014 and the love we see the band get on this disc, there’s no reason to believe this Saga will end anytime soon.

3. Careful Where You Step

Saga: Spin It Again! — Live in Munich is presented in an aspect ratio of 1.78:1. The 1080p image is arrived at with an AVC MPEG-4 codec at an average of 15 mbps. From a visual standpoint, this is a pretty basic concert film presentation. The only thing that passes for any sort of visual innovation is the periodic split screens of different band members playing their instruments, but even those shots feel random and outdated. As for the HD image on this Blu-ray, Spin It Again! makes for an inconsistent, underwhelming outing. Black levels are often below average, which casts a vaguely grayish hue over a significant portion of the crowd shots. There’s also a good amount of noise on some medium shots of the band, and a few instances of heavy noise (a digital racket, if you will) during close-ups of hands on keyboards. Then again, there are some close-ups of the band that are sharp and clear enough to see the sweat pooling on Sadler’s barely-buttoned shirt. Still, this visual presentation is a letdown overall.

The DTS-HD Master Audio 5.1 track, on the other hand, gives the viewer an appropriately muscular wall of sound. The mix is aggressive to the point that it’s sometimes difficult to discern Sadler’s vocals during the verses. (Let’s just say that if you didn’t know the words to these songs coming into this Blu-ray, you won’t learn them by watching this disc.) Still, Sadler is more than intelligible enough during each song’s big moments. On top of that, I prefer a track that faithfully reproduces the live music experience. (Which is more likely to somewhat drown out the lead singer than a recording.) The track’s bottom end is impeccable, giving the band’s prog rock stylings a nice groove. The rears serve as a percussive echo to the music on stage and also surround you with some occasional crowd noise that helps you feel as if you were at the arena.

Behind the Scenes: (20:42) This affable, relaxed featurette helps perpetuate the stereotype that Canadians are unnaturally nice. The members of Saga talk about their close relationship with their fans, who they’ve seen grow up along with the band. (Some of them have been known to attend up to 10 shows in a row and sit in the same spot.) Crew members — like the tour’s guitar tech and lighting director — also get a shout-out for their work. Definitely worth a look if you’re a fan of these guys. Presented in HD.

I won’t lie to you and say that I’m going to run out and buy a handful of Saga albums. (Where would I even buy an album these days? Everything I need is on my phone, right?) However, my first impression of this tight, talented band is a good one, and I can see why they’ve inspired 35 years of devotion.

Spin It Again! is a must-have for Saga fans because it also doubles as a love letter to them. The disc also serves as a pretty good introduction if you’re looking for a new, old band to rock out to.