Posted in: Disc Reviews by Jeremy Butler on November 20th, 2013 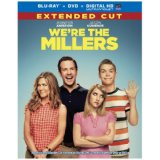 The line between hilarious raunchy comedy and over-the-top raunchy comedy is very fine, and We’re the Millers tends to dance on both sides of it. In time such action will be revealed to be both a blessing and a curse, I suspect. With the young crowd, I believe the film will fall right into place with such movies as Horrible Bosses (a comedy which coincidently starred Aniston and Sudeikis) and to be more recent, This is the End. With more mature audiences, the raunchiness may prove to be slightly more than they were expecting to see. With me, I find myself on the side of the young.

David (Jason Sudeikis) is a small town pot dealer in Denver, an occupation he has held since college without moving forward or backward. Hesitant to admit it, he has grown stagnant with the life he’s leading and wants more out of life. Those desires are put on hold after he is robbed, with both his stash and all of his cash including the money intended for his supplier Brad (Ed Helms, The Hangover). Deep in debt with no prospect of paying it back, Brad offers David one opportunity to erase his debt: smuggle a smidge and a half (inside joke, have to see the movie to understand) of marijuana from Mexico across the border back to Denver.

Reluctant to do it but without a choice, David devises a way to accomplishes it: alone he wouldn’t have a hope of smuggling it back; he needs a cover, and what better cover than an all-American family on a family road trip? With the plan set, he goes about setting assembling his fake family which eventually consists of Rose (Jennifer Aniston), a stripper who lives in his building to play his loving wife, Kenny (Will Poulter, Chronicles of Narnia: The Voyage of the Dawn Treader), an abandoned geeky kid who also lives in his building to play his son, and Casey (Emma Roberts, Nancy Drew), a teenage runaway to be his daughter. Now equipped with his pretend family and a solid cover, the family travels down to Mexico; what can go wrong? Aside from a rival drug cartel coming after them and making camp with a DEA agent, his family, of course.

Together this foursome takes family dysfunction to another level, which is where the film’s true comedy stems from; this fake family that has no idea how to act like a real loving family. Let’s start with the parents: Sudeikis is hilariously anything but your picture-perfect father with crude speech and clear disdain for his children; Aniston holds her own, giving it right back to her husband anytime he dishes it out, not to mention the provocativeness her occupation allowed her to bring; after the striptease she put on let’s just say that if she were mom, she’d be the type you’d catch your friends staring at. When it comes to the kids, Poulter’s Kenny fits the bill as the inexperienced and geeky brother who would likely embarrass his sister, while Roberts’ Casey excellently brings out the attitude you would expect to find in a teenager of this generation including using profanity in full view of her supposed parents and an unhealthy attachment to her iPhone.

We’re the Millers does have its over-the-top moments, like Ed Helms’ interpretation of a drug kingpin; it was too much. It started off funny in the beginning, but then it just became too ridiculous. In the case of underwhelming was the villain, the drug kingpin who was coming after them: that interpretation was too thin; there needed to be more rage, rage toward his men and toward the family he was chasing, especially given the reasons he was after them. The profanity also was laid on pretty thick, which wasn’t really necessary; most of the funny parts came without it being much of a factor.

We’re The Millers is presented in its original aspect ratio of 2.40:1. The 1080p image is arrived at with an AVC MPEG-4 codec at an average 25 mbps. The high-definition image presentation is sharp. You get plenty of detail particularly the natural fleshtones. Sometimes you get too much detail. A certain spider bite scene comes to mind. Colors are all pretty naturalistic. Reds appear to stand out in clothing or cars on the highway. Black levels offer a nice deep inky presence. This is exactly what you’d expect from a modern digital presentation.

The DTS-HD Master Audio 5.1 is pretty much there to drive and service the dialog. There aren’t going to be a lot of aggressive moments in the surrounds, and it’s all totally appropriate to this road picture. The real standout moments come from some of the musical moments in the movie. That’s when you get a peek at a dynamic and crystal-clear audio presentation. Dialog is always front and center and clear at all times.

This collection of very brief features is there to highlight the improv work that was done on the film. There are a ton of alternate takes and outtakes.

Stories From The Road: This collection of seven features averages about two minutes each. They are scene or character specific behind-the-scenes moments. Cast and crew offer the quick takes amidst clips and even more outtakes.

Livin’ It Up With Brad: (3:46) A focus on the Brad character. Basically more narcissistic play.

When Paranoia Sets In: (3:15) A mockumentary that hints the film was really a cover to smuggle genuine drugs into the country.

Deleted Scenes: (16:18) There is no individual selection here. This is mostly more alternate versions of stuff already in the film.

Gags And More Outtakes: (3:01) Did I mention there were a ton of outtakes here?

All in all, I would call the film a success. The good definitely outweighs the bad; Sudeikis and Aniston make for a good team, as do Roberts and Poulter; they are especially strong in the scenes that included them all together. In fact, one of the gems of the film will absolutely turn out to be the road trip sing-along (an even funnier version can be found in the after credits bloopers). Though a bit generic and predictable in the way the story unfolds, We’re the Millers is still a worthwhile experience as long as you view it the way it was intended: a fun, funny road trip movie.

Jeremy Butler is a film school graduate of the International Academy of Design and Technology. He is been writing for Upcomingdiscs since 2012; however, movies have played a big part of his life for much longer. Favorite genres include horror, science fiction/fantasy, and comedy. Favorite movies are V for Vendetta, Boondocks Saints, Kiss Kiss Bang Bang, and The Godfather.
Saga: Spin It Again! — Live in Munich (Blu-ray) Combat!: The Complete Series