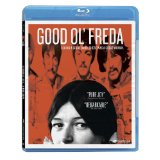 We’re about 50 years removed from the Beatles taking the entire world by storm, so you’d be forgiven for thinking that everything anyone could possibly say about the Fab Four has already been said. Fortunately, the success of Good Ol’ Freda — a Beatles documentary that doubles as a loving tribute to its subject and the famous band she adored — doesn’t hinge on any heretofore unknown/shocking revelations. In other words, the film’s charm doesn’t so much come from what Freda Kelly says; instead, it comes from the delighted, no-fuss way she recounts her time with, arguably, the most famous band of all time.

“Who would want to hear the secretary’s story?”

The most famous Beatles lineup — John Lennon, Paul McCartney, George Harrison and Ringo Starr — was together for 10 years. Freda Kelly, according to this film, was with the band for 11 years. Good Ol’ Freda, directed by Ryan White, follows Kelly from the time she was plucked out of a typing pool and saw her first Beatles show at Liverpool’s Cavern Club in 1961 until she stopped working for the band in 1972, when the band members were more engrossed in their solo careers.

At age 17, Kelly became the secretary for Brian Epstein, the legendary and mercurial manager of the Beatles until his death in 1967. She also served as president of the Beatles fan club and routinely dealt with thousands of fan letters/requests sent to her home after regrettably including her personal address at the end of an early newsletter. Although there are brief testimonials from other musicians of that time and a few family members, the bulk of the film involves Kelly sitting in a couch or rummaging through some boxes in the attic and recalling her wild ride.

I realize this doesn’t exactly make Good Ol’ Freda sound like a compelling thrill ride, but Kelly proves to be a delightfully unlikely movie star. Besides speaking in a pleasing Irish purr, Kelly mixes her modest, soft-spoken nature with a sort of fangirl enthusiasm for the Beatles that still can’t be contained 50 years later. Still, the film makes it very clear that Kelly also had a good head on her shoulders. In fact, it’s Kelly’s fierce loyalty and protectiveness of the band and each member’s privacy that probably resulted in her sticking around for their entire tenure as a unit. (Not surprisingly, she still works as a secretary today.)

That sense of discretion doesn’t appear to have an expiration date. To this day, Kelly cheekily declines to answer the question of whether or not she was ever romantically involved with a Beatle. She does admit to alternately falling for each of the boys based on their well-known personas. She describes John as “a man of many moods,” and Paul as more outwardly friendly; I also love the way she always casually refers to Ringo Starr as “Ritchie.”

Fans hoping to get an extended glimpse of either of the two living Beatles are in for a letdown. (At least until the end credits.) Still, Paul and Ringo’s affection is implicitly expressed through the rare use of Beatles songs on the terrific soundtrack (including the shout-out from the band’s 1963 Christmas album that gives this film its title), as well as the overwhelming amount of candid, behind-the-scenes photos of the boys and Freda. They wouldn’t have allowed the use of either — much less both — if they didn’t support their former friend’s project. As a result, this is a treasure trove for Beatlemaniacs, who will be so excited about getting a glimpse at never-before-seen images that they probably won’t care that this documentary doesn’t tell them anything they didn’t already know.

Good Ol’ Freda doesn’t have a conventional dramatic arc, nor does it try to force one. When she decides to leave the band’s employ in 1962, it’s not because of some huge blow-up or a torrid affair; Kelly simply wanted to focus on her own family. In fact, it was a sense of duty to her family that finally motivated her to share her story after receiving countless book/interview offers over the years. This easy, breezy, unchallenging documentary proves to be an ideal format for Kelly to share her story. Then again, “that’s just my opinion.”

Good Ol’ Freda is presented in an aspect ratio of 1.78:1. The 1080p image is arrived at with an AVC MPEG-4 codec at an average of 22 mpbs. As mentioned before, the film essentially consists of Kelly relaxing in her home and recalling her time with the band. As a result, this film is even more reliant on archival video/photographs than your average doc. Fortunately, the older material looks almost universally sensational. A lot of the black and white photos/video look remarkably clean while maintaining the appropriate amount of grain and texture. The present day interviews are somewhat stark, by comparison; most (if not all) of them were filmed in the U.K., and feature the expected muted palette. Close-ups reveal sharp detail on each interview subject’s face. In short, this vivid Blu-ray presentation goes a long way toward bringing the iconic time period to life.

The DTS-HD Master Audio 5.1 track is asked to work a bit harder here than it would be on other documentaries. Since director Ryan White got almost unprecedented access to Beatles (and other classic) tunes, it seems like he felt implored to use them, even when they weren’t totally necessary. To be fair, the track is mixed well enough; it’s more an issue that you’ll likely be humming along to the song and not listening to what Kelly and company are saying. The brief moments when the music takes center stage (during scene transitions) are also the only instances when the entire surround track is utilized. The material from the interviews generally comes through clearly, which is important since Kelly is so soft-spoken.

Commentary with Freda Kelly and director Ryan White: As if fans weren’t getting enough of a treat with all the rare material on display, this track has Kelly offering even more background details on her time with the Beatles. The big difference is that, by the time this track was recorded, Kelly had already done the documentary and some appearances to promote it. As a result, she is a more assured storyteller while remaining thoroughly delightful. White reiterates how fortunate he was to have the support and participation of McCartney and Starr’s camps.

Deleted Scenes: (12:36) These fives scenes are basically additional, inessential anecdotes from Kelly. The best of the bunch has her talking about her decision to not invite the Beatles to her wedding (it’s supposed to be the bride’s day, after all), and her reaction to John Lennon’s 1980 shooting.

Screening Q&A with Freda Kelly — The Fest for Beatles Fans (22:44) In case the documentary wasn’t enough of a love fest, this gushing featurette has Kelly and White fielding questions and compliments from adoring Beatlemaniacs. Kelly’s response to being the star of a movie is predictably modest.

Interview with director Ryan White: (11:17) Here we learn White actually knew Kelly for years through his uncle, musician Billy Kinsley of the Merseybeats, another band from Liverpool. Despite knowing Freda for all those years, he had no idea about her time with the Beatles. White also states Kelly’s daughter told him 95% of what’s in the movie was news to her.

Fans (even more casual ones, like myself) hoping to find out something new or scandalous about the Beatles won’t find it here. Then again, if you’re a rabid Beatles fan, there’s a decent chance you already know everything there is to know about the Fab Four. That’s why I think Beatlemaniacs are the ones most likely to enjoy this love letter to the band. Personally, I was most grateful to get a glimpse at the positive side of superfandom.