Posted in: Disc Reviews by Brent Lorentson on December 11th, 2013 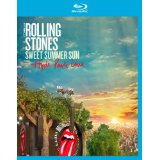 When you’ve been playing gigs for fifty years and filling venues with crowds in excess of the 100,000 mark, it’s safe to say that not only are you a success in the music industry but an icon.  The Rolling Stones finished their 50th year together by ending their tour back where many would say their legendary status began, back in their hometown and performing at London’s Hyde Park. It was 44 years ago when The Stones first took the stage in the famous Hyde Park and performed for a crowd estimated between 250 thousand to half a million screaming fans who came to what was then a free show.  This time around they return with an enormous stage and a set list filled with hits spanning over the decades.

As for the viewing experience of the show, as with every concert disc we get to review, no matter how great the performance may be, nothing can ever match the experience of being in the crowd and hearing it live.  This is one of those concerts that I can imagine; those lucky enough to attend had a concert experience like no other and would talk about with friends for many years to come.

Start Me Up kicks off the show with the energy you would expect a rock band to deliver that has been touring for so many years.  But it’s when the camera first pans over the audience that the enormity of the crowd is seen.  Waves of people seem to go on into the horizon, all cheering and singing along, embracing the experience.

Throughout the concert we are given glimpses to the first Hyde Park show; we see how the band has evolved.  At the previous Hyde Park show the band released boxes filled with white butterflies; sure, the gesture seemed great, but this was before their were jumbo screens displaying the stage, so this act was missed by thousands and only heard about later in news reports following the show.  For 2013 instead of releasing the winged insects upon the masses, Mick instead struts upon the stage in a designer jacket with blue butterflies stitched around it.  This is just one of several outfits Mick has on throughout the performance.

The final act of the show brings all the monster hits for the band, and it’s here where they really hit their stride.  During Sympathy for the Devil the stage is bathed in red light, and for me this was one of the highlights of the show.  It’s a song so recognizable by the first chords, but in this performance it’s as though I was hearing it for the first time.  They smoothly slide into Brown Sugar and You Can’t Always Get What You Want.  To close out the show we are first given a brief narration by the band about how they feel about closing out the show and how they feel every night they want to perform it better than the last, and they close with Satisfaction.

For the hardcore fans this was the show that would go down as one of the all-time greats to have gotten to attend live.  There isn’t a current up-and-coming artist who I believe has the staying power of The Stones, nor do I believe there is a group out there that could keep up with The Stones even at their age.

You Got The Silver

Sympathy For The Devil

You Can’t Always Get What You Want

(I Can’t Get No) Satisfaction

The Rolling Stones: Sweet Summer Sun is presented in a 1.78:1 aspect ratio.  The 1080i image is arrived at with an AVC MPEG-4 codec at an average of 24mbps.  What sets this apart from most of the run-of-the-mill concert releases is that most of the concert is shot outdoors and during the day and on into the night.  The image remains sharp throughout the performance, though this doesn’t help the performers so much, since they are well into their graying years and their age lines show in glorious HD.  With cameras rigged all over the stage and over the crowd, we are given a variety of immersive shots with the audience as well as plenty of cuts to the band.  As the group plays on into the golden hour, the concert looked its finest.  There were only a handful of moments where I felt the image was a little blown out, but it never was too distracting from the show.  As the show moved into the nighttime, we get the average concert footage.  Though as I mentioned above when Sympathy For The Devil is performed, the light show that plays on throughout looks amazing; everything just looks beautiful under the red hue. When we are given clips from the first Hyde Park concert, it’s amazing the contrast in the quality and is a good representation on how far technology has come in its presentation to the viewers.

The DTS Master Audio 5.1 track is just about as immersive as you can get without actually being at the concert yourself.  The ambience of the crowd is always present whether it’s the audience singing along or simply cheering.  When Jagger performs his vocals, the energy simply pounds you from the speakers and continues throughout.  The vocals are a bit gravelly at times, but I blame that more on the fact Jagger is actually performing feeling unfiltered and nearly out of breath because the man simply puts his all into every song.  Richards, of course, sounds amazing, giving the guitar licks a little something extra every song, which I’m fine with; hearing a familiar song with a different touch is part of seeing a concert in the first place.  I’m a fan of this mix; it had me wishing I was there in London among the masses.

The only bonuses here are a few additional tracks that were not cut into the final release of the live performance.

Before They Make Me Run

I’ve always liked The Rolling Stones, but I would never call myself a diehard fan.  This is a concert, though, I wish I could have gotten to witness for myself.  Considering the group has been going strong for 50 years, the group continues to deliver what the fans want, and hopefully the group will stick around for several more tours to come.

Brent Lorentson is a horror writer and film critic based out of Tampa, Florida. With a BA in Digital Film, he co-wrote and co-directed Scavenger Hunt. His short stories have appeared in various horror anthologies. In 2019 his short script Fertile Blood will be a part of the anthology horror film Slumber Party. He is currently working on his first novel A Dark and Secret Place set to be released in late 2019. Favorite Films: Taxi Driver, Fight Club, I Saw the Devil, The Wild Bunch, Dawn of the Dead, A Clockwork Orange, Pulp Fiction, Heathers, The Monster Squad, and High Fidelity.
The Simpsons: The Sixteenth Season (Blu-ray) Jayne Mansfield’s Car (Blu-ray)