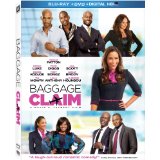 Paula Patton has managed to stand out on the big screen alongside Hollywood heavyweights like Denzel Washington (Déjà Vu, 2 Guns) and Tom Cruise (Mission Impossible: Ghost Protocol), but she’s still probably best known for being married to Beetle-douche. That’s why I was hoping Baggage Claim, her first big solo starring vehicle, would be so much better than it turned out to be. It’s tempting to dismiss it as just another corny, clichéd romantic comedy, and forget about it until it pops up on TBS two years from now. But the film squanders too much appealing talent — and insults the audience’s intelligence too often — to let it off the hook quite so easily.

“My relationships have never been cleared for takeoff.”

That cheeseball line immediately lets us know our heroine Montana Moore (Patton) is either a pilot or a flight attendant. Since the movie might’ve been a little more interesting if she had been a pilot, Montana is actually a marriage-obsessed flight attendant. Her overbearing mother (Jennifer Lewis) has been married five times, and she taught Montana that a “lady” ought to be married by age 30 and a “woman” needs to have at least two kids. Montana’s prospects look bright until her current relationship with a seemingly perfect big-shot named Graham (Boris Kodjoe) hits a patch of turbulence. On top of that, Montana’s younger sister (Lauren London) announces that she’s getting married. So Montana, who is pushing 30, does what any logical woman would do under similar circumstances: she decides she needs to get engaged before her sister’s wedding.

“First of all, this is the stupidest idea ever.”

At least one person in this movie has some sense. Since her sister’s wedding is in a month, Montana realizes she doesn’t have time to fall in love with anyone new. Her co-flight attendants (Adam Brody and scene-stealer Jill Scott, responsible for the quote above this paragraph) decide to help Montana hook up with one of her exes, who all happen to be flying on their particular airline during the holiday season. Those suitors include a seemingly successful rapper (Trey Songz), a controlling politician (Taye Diggs), and a rich hotelier (Djimon Hounsou). There’s also William (Derek Luke), Montana’s kind, handsome childhood friend who lives right across the hall, but nah…he couldn’t possibly be a contender. Instead, Montana racks up 30,000 miles in 30 days trying to find Mr. Right.

Both the concept (a mixture of 27 Dresses and What’s Your Number?) and execution of Baggage Claim feel creaky and outdated, rather than cozily familiar in the way that makes certain rom-coms compulsively watchable. Writer/director David E. Talbert based the film on a novel he wrote a decade ago. Talbert is primarily known for his work as a playwright, and he has only made one other feature film (First Sunday). Unfortunately, it shows.

Broad, simplistic material that works well on stage — where the message often needs to reach the last row in the mezzanine — can come off as grating on screen. The push that many women feel to get married because of societal and familial pressure is a real thing, and can easily support a variety of thoughtful takes on the subject. Instead, Talbert almost always takes the most uninspired road imaginable and doesn’t even trust his audience to comprehend the extremely simple premise. Scott’s character (again) is the one who unnecessarily spells things out by saying “it’s the 21st century; you don’t need a man to define you.”

As successful and appealing as Patton has been in supporting roles, I also understand that no actress — especially one of color — is in a position to swat away lead roles when they’re being offered. I say that because it makes it a little easier to understand why she’d sign on to headline such a generic project, and why the actress seems way too eager to please in the lead role.

Patton’s radiance remains intact, but her easy charisma is mostly gone. The only time it pops up is during scenes with Luke (gently trying to push his way out of the Friend Zone), Diggs (committed to his condescension) and Hounsou (effortlessly debonair). There’s also a funny beat with Tia Mowry as a crazed colleague of one of Montana’s suitors. But as I mentioned before, the most consistent laughs come from Brody and Scott as Montana’s bickering support system. (Scott, in particular, is a total hoot.) It seems like Talbert didn’t want to decide between giving the main character a sassy gay best friend or a sassy black best friend, so he decided to do both. I’m glad he did.

Like many films in this genre, Baggage Claim ends pretty much the way you’d expect. In this case, the overdone, last-minute dash to the airport makes a little more sense considering the protagonist’s job. Brushing aside (as we must with so many romantic comedies) the silly idea that a woman who looks like Patton couldn’t find even a semi-worthy suitor, the actress is simply made to look like a fool in this movie. (I imagine Katherine Heigl watching this and feeling embarrassed for Patton.) At one point, the story forces Montana to hide out in a trash can. The moment is meant to be a bit of charming, slapstick-y hijinx, but it mostly made me feel like Patton was too good for this garbage.

Baggage Claim is presented in an aspect ratio of 1.85:1. The 1080p image is arrived at with an AVC MPEG-4 codec at an average of 36 mbps. The visual presentation on this Fox Blu-ray is as relentlessly sunny as its protagonist. It’s a clean, relatively straightforward HD image, and the impressive sharpness and clarity serve to enhance the cast’s attractiveness. In fact, the presentation is a little too good during a scene where Montana is riding in a car and the green-screened background behind her looks jarringly fake. We’re not talking about the highest degree of difficulty here, but I believe the film looks just about as good as it possibly can on this Blu-ray.

The DTS-HD Master Audio 5.1 track is understandably heavy on the dialogue, which comes through crystal clear and dominates the sound field. The track still leaves room for ambient noises in the rears — the whooshing of a jet engine during flights; subdued crowd noise during airport/restaurant scenes — and the subs only come to life when it’s required by certain songs on the soundtrack. As with the visual presentation, there’s not a ton going on here — even less so with the audio track, actually — but what we do get is pretty good.

Deleted Scenes: (9:05) There are just three scenes, and they’re each extended or alternate versions of material in the film. The most amusing bit involves Montana comparing men to types of baggage, but there’s really nothing new to see here. Features optional commentary from writer/director David E. Talbert and a Play All option.

Behind the Scenes with the Director: (2:35) One of the more mystifying bonus features I’ve ever seen. This is basically a montage of Talbert running up to actors on set during filming and whispering things in their ear…except we don’t get to hear what he’s telling them. I guess that’s why they threw in another optional commentary with Talbert, where he likens his directorial style to a coach running up to each individual player instead of bellowing out instructions. Weird.

Audio Commentary with writer/director David E. Talbert: The filmmaker talks about writing the “Baggage Claim” novel 10 years ago and developing the movie for five years. However, most of the commentary features the director complimenting his actors and sharing production notes. (Despite Montana hopping all across the country, all the filming was done in downtown Los Angeles, according to Talbert.) You can skip this track and not miss much.

I almost bumped the movie’s overall score up half a point because it looks so great on this Blu-ray, but the bewildering, redundant, underwhelming bonus material mostly canceled that out.

Patton and the rest of the cast get an A for effort, but I’m afraid I have to give the movie itself a considerably lower grade. Only watch this if you’re absolutely desperate to see Paula Patton on your screen for an extended period of time. Even then, it’s probably best if you watch it on mute.