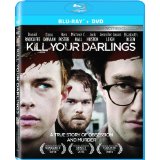 For some reason, I have themes that I keep reviewing time in and time again (regardless of whether I enjoy the subject matter or not). One of those themes or rather people is Allen Ginsberg, one of the most important poets of the 20th century and symbol of the Beat Generation. A few years ago, I reviewed Howl which was more about his 1957 obscenity trial. This film, Kill Your Darlings deals with the relationship between Allen Ginsberg and Lucien Carr. Let us see how well this one turns out.

“Some things once you love them become yours forever.”, the narrator speaks as we shift to a scene where a half naked man covered in blood carries another unconscious man. After this shocking imagery, we shift again to see Lucien Carr (played by Dane DeHaan) in jail with Allen Ginsberg (played by Daniel Radcliffe) outside the bars. Lucien tells Allen that he can’t tell the story. Allen looks dead at Lucien and says, “Watch Me.”

Let’s slide back to Paterson, New Jersey, circa 1943. Allen is dancing a jig, and his father, Louis (played by David Cross)comes home from work. Allen stops dancing to the music and then checks his list of chores to make sure he has done them all. Soon, Allen hears his mom, Naomi (played by Jennifer Jason Leigh) call for him. It appears that his mom is quite nuts and claims that his father is trying to kill her. With this father watching on from the other room, Allen is forced to tell his mother that he will never leave her.

Later, outside Allen and his father open up a very important letter from Columbia University. Allen is being accepted to the fabled university and will start in the fall. So much for not leaving mother. Next, we see Allen at Columbia and he meets his dorm-mate, Luke Detiweler (played by Zach Appelman). But the most important person that Allen meets at Columbia happens later when he witnesses Lucien Carr who spontaneously stands up and starts to recite Henry Miller, a book that is banned by the university.

Later, the two are talking while listening to Brahms and start to bond. However, right at a pivotal moment the proceedings are interrupted by Allen’s mother who tries and convince him to come home. However, that really doesn’t go as well as planned. Allen decides to go downtown with Lucien instead. It’s the edge of the world and Allen in Wonderland. But this little friendship is soon to wrap in two important characters: William Burroughs (played by Ben Foster) and David Kammerer (played by Michael C. Hall).

This film basically breaks into two worlds at this point, we have the relationship between Lucien and David which soon moves into a counter relationship between Lucien and Allen. Along the way, we explore sexual tension of a hetero and homo-erotic nature along with a copious amount of drugs and other mind altering substances. This all plays into a fever pitch full of obsessive desires and yes, there is a touch of murder here too. We’ll leave the details to the viewer who partakes in watching this film.

I have always enjoyed Daniel Radcliffe, even away from Harry Potter fame. Here it is no different. He does an excellent job of playing the Beat poet right down to the hugely quirky and geeky nature. Lucien or rather Dane DeHaan is also equally interesting even if he is voice wears thin after about half an hour. The supporting cast including Jennifer Jason Leigh (who makes great use of her limited screen time) all do an adequate job.

But, again I find myself not being able to get into the film. Maybe it’s the subject matter, maybe it’s the drug altering scenes where everything goes hazy, or maybe at the end of the day, I am not very interested in the story between Allen and Lucien. I am not sure. It never draws me in and I found myself drifting after a hour into the movie. To be honest, the commentary held my interest more than the actual film did.

The video is in 2.40:1 widescreen at 1080P. While a lot of this film is set work, there is also a great deal of it they tried to film in the various locales around Columbia University and Paterson, New Jersey. The film is well shot and there is a great use of staying to the time period here. It helps when the actors look like they are pulled out of the time period but there is a excellent job of the director, John Krokidas to portray the 1940’s. I could have done without Daniel Radcliffe’s bare ass though, but I digress.

The audio is presented in 5.1 English Dolby DTS-HD MA(Czech and Polish VO 5.1 Dolby Digital also are available). I think this is the first time I have seen a Polish track on a film (I’m half Polish as it turns out), but sadly I still did not understand a word of it. Anyhow, the movie is primarily dialogue but sounds excellent on the speakers. There is even a bit of bass that is well used here for effect as needed. Dialog is clear, and there are no complaints to be had. The following subtitles are also included: English, English SDH, Bulgarian, Croatian, Czech, Hungarian, Polish, Portuguese, Romanian, Serbian, Slovak, and Slovene.

Much like Howl, I found myself knowing much more than I cared to about Allen Ginsberg from watching Kill Your Darlings. Sure, Daniel Radcliffe and Dane DeHaan do a great job, but the story behind it never comes back to grab me and keep me wanting to watch until the end. Thankfully, the disc behind is excellent for those who appreciate the subject matter with well done special features and time accurate video and audio to compliment it. If you like Allen Ginsberg, you will probably pick it up but the other viewers should probably exercise a bit of caution. Half-way recommended.

Michael Durr has been reviewing movies for the better part of fifteen years now. He primarily enjoys thrillers, sci-fi, animation and even a little courtroom drama. His favorite films include Escape from New York, the Goonies and anything with Alyssa Milano. When he’s not praising Kurt Russell as the greatest actor of our time or scratching his head over a David Lynch flick, he’s spending time at home in Texas with his lovely wife, Lori and his amazing son. How they put up with him is a mystery, but even Basil Rathbone doesn’t have the time to solve that one.
Divergent Dora the Explorer: Dora in Wonderland