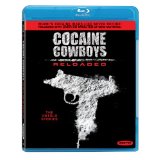 Today, Miami is considered one of the most glamorous cities in the world. But long before it became the place where some of the biggest stars in sports and entertainment took their talents, Miami was dubbed the drug, murder, and cash capital of the United States. (Resulting in a drastically different “Big 3” than what locals are accustomed to these days.) Cocaine Cowboys already chronicled this shockingly violent stretch of the city’s history and featured recollections from some of the people who helped Miami achieve its dubious status. Now an extended version of Billy Corben’s 2006 documentary arrives on Blu-ray.

The core of the film remains the same. Both versions of Cocaine Cowboys recount the period in the 1970s and ‘80s when cocaine flooded Miami’s geographically-convenient shores, leading to a major economic boost and (eventually) an outrageous breakout of violence. The film gets its title after one interviewee likens that version of Miami to the Wild West, since killers felt free to commit shootings and murders out in the open. The biggest offenders, according to the film, were associated with the Medellin Cartel from Colombia. It all culminated with a 1981 Time Magazine cover story that proclaimed South Florida as “Paradise Lost.”

Instead of simply layering the new material on top of the original cut, Cocaine Cowboys: Reloaded is a markedly different movie. The changes go beyond each film’s running time: the 2006 release clocked in at 118 minutes, while the Reloaded version sprawls to 152 minutes. The additional material is culled from archival news footage that was recently uncovered, as well as the hundreds of hours’ worth of interviews that every documentary filmmaker accumulates while working on a project. So while the original cut played out like a dishy tabloid tale, Reloaded feels more like a conventional documentary. The result is a film that is more comprehensive, but also more sluggish (particularly in its second half) than its predecessor.

The original film relied heavily on testimony from three central figures, along with the specter of a fourth. Cocaine Cowboys “starred” Jon Roberts, a New York transplant previously associated with the Gambino crime family who became a major drug trafficker in South Florida. There was also Mickey Munday, a Florida native/smuggler responsible for transporting 38 tons of cocaine, and Jorge “Rivi” Ayala, an enforcer for the Colombian cartel who has confessed to 29 murders and is suspected of a dozen others.

Rivi was the favored enforcer for Griselda Blanco, a key cartel figure who was alternately known as “La Madrina” (“The Godmother”) and the Black Widow. (You know someone is scary when they inspire multiple nicknames.) We only get still photographs of Blanco in both versions of the film, but she’s such a powerfully chilling presence that Corben (and co-director Lisa M. Perry) featured her in a sequel/spinoff, 2008’s Cocaine Cowboys 2: Hustlin’ with the Godmother.

Whereas Roberts’ testimony really dominated the first half of the original film — which was fine because he was a gifted storyteller — Reloaded offers more anecdotes from the likes of Munday and Rivi, along with the various officials and law enforcement personnel who were eventually tasked with restoring order. Munday reveals he liked to set up meetings at loud bowling alleys, just in case he was being recorded. Meanwhile, Rivi’s detached magnetism becomes even more compelling when he’s allowed to talk about his crimes in detail. In other words, it’s riveting to hear him describe his assorted killings in the same tone and manner you or I would use to describe what we did at work today.

The two versions of Cocaine Cowboys have different opening sequences. The original kicked off with an account of the drug-fueled Dadeland Mall shooting spree of 1979, while Reloaded opens with an earnest televised message from former Miami Mayor Randy Christmas. However, the best additions in Reloaded don’t involve longer, more outlandish anecdotes from the film’s interview subjects. (Although it’s hard not to be amazed by the idea of a refrigerated Burger King truck being used as a temporary morgue.)  The best new bits highlight and expand upon the region’s stranger-than-fiction history.

I’m thinking of the extended look at the Mariel Boatlift, the 1980 exodus that brought a number of Cuban prisoners and mental hospital patients to Miami’s shores. (Not to mention Tony Montana.) It’s easy to see why this material didn’t fit in with the more Colombian cartel-centric original cut, but it’s a vital chapter of the city’s history. Speaking of Tony Montana, the film also briefly touches on the impact Miami’s real-life lawlessness had on pop culture, namely Scarface and Miami Vice. Usually, when something outlandish happens, it’s described as “something out of a movie.” In Miami’s case, the opposite was true: the crazy stuff on-screen often sprung from “something out of real life.”

It’s rare for non-fiction films to become profitable (or buzzy) enough to justify any sort of re-release. The new material here doesn’t really improve Cocaine Cowboys. Still, it’s good to see a documentary get a second (or in this case, third) life given all the fascinating material non-fiction directors are forced to leave on the cutting room floor.

Cocaine Cowboys: Reloaded is presented in an aspect ratio of 1.78:1. The 1080p image is arrived at with an AVC MPEG-4 codec at an average of 32 mbps. Like most other documentaries, Cocaine Cowboys juggles several different video sources, many of which far predate the HD era. The Reloaded Blu-ray authentically reproduces the softer, blurrier news footage of the ‘70s and ‘80s while giving a slight boost in sharpness and clarity to the interview segments previously featured on the original 2006 release. (The segments with reporter Edna Buchanan, in particular, look better.) The newer version of the film also incorporates some colorful, motion-comic style animated graphics that look quite good in HD.

The DTS-HD Master Audio 5.1 track serves the dialogue — which comes at a brisk, steady clip — quite well. The film’s score comes courtesy of Jan Hammer, best known for his work on Miami Vice. The synth-heavy sound occupies a good portion of the surround speakers, and it even gets the subs going whenever the music takes the forefront. There’s plenty of activity in the rears, but the track doesn’t really offer much in the way of immersion. (Then again, it’s hard to get immersed in anything when the movie is hopping from one interview subject or time period to another.) The most dynamic burst of sound comes during the part of the film that re-visits the Dadeland Mall shooting.

Deleted Scenes: (13:52) These eight skippable scenes feature more anecdotes from the film’s major players, including a story from Munday about meeting Manuel Noriega in Panama. There’s also footage of homicide detective Al Singleton introducing himself and telling us how he came to join the Miami-Dade Police Department. The scenes are presented in eight separate chapters, but you can’t view them individually. Presented in HD.

I’m glad to report that, even if you’ve already seen or own Cocaine Cowboys, this version offers something different. There’s enough fresh material in Reloaded — including cameos from John DeLorean(?!) and much younger versions of Rudy Giuliani and Vice President Joe Biden — for fans to give this film another look. (The solid HD upgrade courtesy of Magnolia Home Entertainment doesn’t hurt either.) Conversely, there’s footage from the original that doesn’t make the cut here.

Reloaded also allowed the filmmakers to add some fresh postscripts, including interview subjects who have passed away (or been assassinated) since the original film was released in 2006.

Personally, I still prefer the leaner original cut because its form (the frenzied, machine-gun pacing) more closely followed its function (to tell the coked-up story of Miami in the ‘70s and ‘80s).

The Hobbit: The Desolation of Smaug (Blu-ray) Hill Street Blues: Captain On Deck