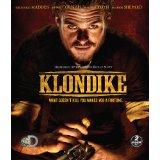 “You’re either gettin’ or gettin’ got”.

It’s very tricky to make an historical drama. Writers and directors have to carefully balance the needs of entertainment over facts and authenticity. There comes the inevitable moment when they will be in conflict, and a decision must be made as to which direction will have priority in the telling of the tale. It might have been an unfair expectation on my part, but when an historical drama mini-series comes to a place like The Discovery Channel I tend to look for any conflict to be resolved in the favor of historical accuracy. If you were hoping for the same from The Discovery Channel’s first scripted production Klondike…well…you’d be, shall we say, inaccurate. We got “gotten”.

The mini-series is based on the book Gold Diggers: Striking It Rich In The Klondike by Charlotte Gray. Her book chronicles the lives of six people who set out for the Klondike in the late 1890’s to seek their fortunes in gold. We are familiar with gold rushes, but most of us associate that term with the Northern California rush of 1849, or a popular football team that plays in San Francisco. No question the ’49er Gold Rush is the most famous in America. It combines with the frontier fantasies of the wild west, and television and movies have distorted it to the point of it being a mere cliché today. But there were many such rushes over the years. Someone discovers the illusive stuff, word gets out, and pretty soon you have waves of refugees trying to strike it rich. It was the 19th century version of the lotto, except this game demanded hard work and too often your life if you lost, and even more likely if you won. There was little to no law in these bursting towns, and so it was every man (or woman) for themselves.

Klondike begins with the story of two friends recently graduated from college and eager to make their mark in the world. They pool their money and hop a train bound for nowhere in particular. There they meet a stranger who is giving away drinks and gold like it was growing on trees. Impressed with his abundance of wealth, they press him for his “secret”. They’re told a story of untapped riches in the remote and frigid Klondike. His tale inspires the pair to take up what little they have and join the mad rush to the hidden treasures.

Bryon Epstein, played by Augustus Prew, is the careless part of the team. He revels in his freedom and throws all caution to the wind. It shouldn’t be much of a spoiler that he won’t be with us for most of the mini-series. His friend Bill Haskell, played by Richard Madden, is the cautious optimist who wants to plan things as much as he can. Together they make the treacherous journey over the mountains fighting bitter cold, avalanches and con men eager to take what little stake they have. They make it to Dawson City, which serves as the mecca for the miners, and finally stake their claim.

From here the story deals with a few of the residents of this mining community and the human treachery that so dominates their interactions. We find Sam Shepherd playing a priest who has come to build a church for the lost souls of these miners. Tim Roth plays the ruthless land speculator known only as The Count. This is the kind of guy who will bid on your property and then shoot you dead as soon as you signed it over to him. His greatest nemesis in Dawson is Belinda Mulrooney, played by Abbie Cornish. She’s a young, independent woman who has been on her own since she was 13 years old. She’s gained and lost more fortunes than she can count. She goes up against The Count and has a complicated relationship with Bill. In once scene she’s trying to con him out of his claim. In another she’s seducing him. Make no mistake, she’s as ruthless as The Count, just not as eager or willing to pull the trigger. Tim Blake Nelson plays Meeker, a prospector who Abbie sends to work the half of Bill’s claim she got through Epstein’s unfortunate naïveté and demise. Bill and Epstein end up becoming good friends and partners. Ian Hart plays Soapy Smith, the town grifter who is always playing a con on someone. He’s a fast talker and a mouse of a man.

On the positive side, the series was filmed in Canada, and many of the locations are spectacular. The series certainly follows in the Discovery tradition of taking us to exotic and exciting locations. The location for Dawson City was equally as awesome. While some of the computer-generated enhancements to the locations are less than spectacular, for the most part there is a lot of beautiful scenery to enjoy here. The production values were just as good and at least felt authentic.

The problems are mostly associated with the script. The story is riddled with historical inaccuracies from the geography of the location to the people involved in the story. The writers couldn’t resist throwing in a young Jack London complete with a young wolf-cub who looked more like a Siberian husky. Of course, Bill ends up inspiring London, and we’re made to believe this is where he got the material. London was nowhere near Dawson City in this era. It’s a case of not only throwing in a known historical figure but trying to take credit that these events turned him from a mild journalist into the gutsy outdoorsman that he’s known as. This kind of arrogant storytelling is patronizing to an audience. It also shows little confidence in your own story, which in this case would be the correct stand.

The cast do a pretty good job with what they have, but what they have isn’t that much. The story can’t seem to decide if there’s a focus on the Bill character or if this is an ensemble. The result is that neither is truly served, and the piece appears to meander in and out of character’s lives. There are also time jumps that leave you scratching your head. When Bill meets Meeker, he sees him as an intruder and determines to ignore the interloper. At some point they are now working side by side and best of friends. We never actually see this transformation happen. It’s just one example of forced circumstances that jar you out of the drama.

Story threads are also tossed into the mix only to be ignored forever after. Relationships change quickly without any real transition from one to the next. Suddenly there’s a mine entrance on the claim and they’re working inside. More time was spent on the plot device of his getting more wood than on the actual construction of the mine. Some of these problems might be explained by the change in format for the release. The show originally aired in six parts. Here they’re combined into just three. All of the material is there, but we’re missing some important breaks that could well explain time passing that we didn’t see. I’m not sure why the choice was made to alter the presentation. The result is a kind of Hell On Wheels atmosphere (plenty of mud) and an attempt at Deadwood characters and relationships. In the end you get nothing as good as either.

Klondike is presented in its original aspect ratio of 1.79:1. The 1080p image is arrived at with an AVC MPEG-4 codec at an average 25 mbps. The location vistas are often quite spectacular in this high-definition image presentation. Unfortunately, many times the image appears to go soft. In those instances contrast is weak, and black levels fail to deliver a nice rich black inkiness. Little shadow definition adds to the often weak picture. When the image is good, it can be very good. Close-ups of actors occasionally deliver splendid texture and detail. But it’s all inconsistent, changing from one scene to the next. I suspect there were huge challenges of lighting in various locations.

The DTS-HD Master Audio 5.1 is there to serve the dialog and a repetitive score. There are moments during the avalanche or when wind is howling on the open wasteland that surrounds pick up the pace. The audio is just as inconsistent, but fortunately the dialog is most always clear.

Behind The Scenes: (21:16) This is very much a promotional piece that likely aired on Discovery. There’s the deep-voice narration and hype text that you’d expect on a trailer. There is a good bit of cast and crew interview footage, but they pat each other on the back, for the most part.

Discovering The Klondike: (10:35) Much of the same interview footage.

Odds are this is going to show up on Discovery again in the future. That might be your best bet to catch it. I’m happy to see Discovery enter the scripted drama game and I look forward to better efforts down the road. For me, “I’m done with the Klondike”.

Gino Sassani is a member of the Southeastern Film Critic's Association (SEFCA). He is a film and television critic based in Tampa, Florida. He's also the Senior Editor here at Upcomingdiscs. Gino started reviewing films in the early 1990's as a segment of his local television show Focus. He's an award-winning recording artist for Omega Records. Gino is currently working on his 8th album Merchants & Mercenaries. Gino took over Upcomingdiscs Dec 1, 2008. He works out of a home theater he calls The Reel World. Favorite films: The Godfather, The Godfather Part II, The Body Snatcher (Val Lewton film with Karloff and Lugosi, not the pod people film), Unforgiven, Gladiator, The Lion King, Jaws, Son Of Frankenstein, The Good, The Bad And The Ugly, and Monsters, Inc.
Louie: Season 3 The Rover