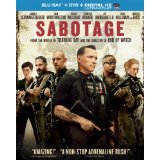 The box office has not been kind to Arnold Schwarzenegger ever since he stopped being “The Governator” and started headlining movies again. Not counting his Expendable glorified cameos, Ahnuld’s three movies — The Last Stand, Escape Plan, and Sabotage — are among the lowest domestic grossers of his career. It’s clear that not a lot of people are seeing these movies, which is kind of a shame. I can’t personally speak to Escape Plan, but The Last Stand is a hell of an enjoyable action ride. The darker, more lumbering Sabotage isn’t nearly as much fun, but it does feature one of Schwarzenegger’s finer acting performances.

Now, I’m fully aware that saying a movie features “one of Schwarzenegger’s finer acting performances” could cynically be construed as someone saying something like “this was one of the finer seasons of Jersey Shore.” But bear with me.

Early on in the film, we watch them violently take down a drug cartel and skim $10 million out of the $200 million haul for themselves. Unfortunately, when they go to collect the money they stole, it’s all gone. As a result, the team has to dodge an internal DEA investigation for stealing money they don’t even have. More importantly, it appears cartel members might be looking for some payback when team members start getting killed under increasingly horrific circumstances. The killings attract the attention of a pair of investigators (Olivia Williams, Harold Perrineau). It’s an intriguing set up for a muscle-bound mystery thriller. Unfortunately, the execution winds up being as messy as what happens to some of the members of Breacher’s team.

The film is directed by David Ayer, who has previously explored the dark side of police work in his own crime dramas (End of Watch, Street Kings, Harsh Times) and — most famously — his screenplay for Training Day. Sabotage is Ayer’s first stab at a whodunit, and the proverbial seams are showing in a big way. (Slapping a cowboy hat on Arnie’s head for the film’s tacked-on ending can’t fully hide the fact that his hair is totally different.)

It’s a shame because Ayer, who served in the Navy and grew up in South Central L.A., brings a gritty authenticity to Sabotage. It’s evident during any scene where the team is busting each other’s chops — the fratty put-downs are as exhausting as they are (probably) true-to-life — and during any pulse-quickening scene when Breacher’s squad goes into tactical mode. I just wish half of that care and attention to detail had also been lavished on the film’s plot and characters, with one notable exception.

Schwarzenegger is actually pretty terrific as Breacher. He’s always been a larger-than-life star, but I don’t think he gets the credit he deserves for his willingness to play with others on-screen. (Arnie’s had memorable movie team ups with surprising co-stars like Danny DeVito, Tom Arnold, Johnny Knoxville, and more.) However, Schwarzenegger’s not exactly known for his ensemble work. (The last time he played a semi-villainous role in an ensemble, this happened.) In Sabotage, he’s got a neck tattoo, his hair is cropped closer than usual and his temples have been dyed a white blonde to give him a more severe appearance. It’s an effective mini-makeover; more importantly, the star seems to embrace the challenge of playing a darker, more conflicted character. (Sabotage opens with a chilling scene that reveals Breacher might have a more personal vendetta against a certain drug cartel.)

If Breacher is the grizzled papa bear, then the rest of the cast gets to play his ne’er-do-well kids. Most of them play various shades of meathead, including Meathead with a Conscience (Manganiello), Hot-Headed Meathead (Martini), and Bald Meathead Obsessed with the Idea That This Gang of Thieves is a Family ( Worthington). The standout is Enos, so joyless and dour on The Killing, exploding to life as the unhinged Lizzie. Williams has a few amusing moments with Perrineau, but her relatively prominent role in the film’s second half doesn’t feel totally earned.

Originally, Sabotage clocked in at over three hours — some of that bonus material can be found in this disc’s special features section — before being whittled down to the more action-heavy theatrical cut. The unfortunate result is a movie that feels perpetually incomplete; it’s not fleshed out enough to be a totally satisfying mystery, but it’s also not quite dumb enough to be unabashedly enjoyed as a pulpy action flick. You always get the sense there’s a more interesting movie lurking beneath the surface.

Sabotage is presented in an aspect ratio of 1.85:1. The 1080p image is arrived at with an AVC MPEG-4 codec at an average of 33 mbps. This disc from Universal delivers a strong HD image that retains an appropriate amount of grit and texture for such a dark action drama. Medium shots are generally clean — you can compare their clarity to the occasionally grainy videocam footage used during interrogation scenes — but the real standouts are the close-ups. They offer a great look at everything from actors’ stubble to some stomach-turning shots of viscera and other graphic images. Not surprisingly, the palette is a bit muted and gun metal gray, but the Atlanta-set film does include some nice pops of brightness when the action moves outside. It may not be a dazzling visual presentation, but it’s as rock solid as Schwarzenegger.

The DTS-HD Master Audio 5.1 track is as aggressive as the barking, bickering members of Breacher’s team. That aggressiveness largely suits the material, but there are a few instances when the track pushes (via the subs) David Sardy’s pulsating score over the top. Other than that, this is an impressively lively presentation that has bullets flying all around the surround sound field and knows how to punctuate sound effects with a proper oomph. Dialogue remains largely intelligible, which is trickier than you might expect here given the amount of overlapping chatter during any scene where Breacher’s squad is cracking on each other.

Alternate Endings: (11:03) The alternate endings — yep, that’s plural — are billed as a Blu-ray exclusive. They’re also pretty confusing if you watch them first and without any context. (I suggest you give the deleted scenes a look before you click on this feature.) Anyway, these two endings feature a more overtly villainous Breacher facing off against Olivia Williams’ Caroline with a different result each time. Features a Play All option.

Deleted Scenes: (17:13) There are eight scenes included here. Most of the screen time is intriguingly taken up by an abduction case that appears to be totally unrelated to the film’s main storyline. (We only hear Caroline reference the case in the theatrical cut.) This batch of scenes also includes the sequence that leads into the two alternate endings. Features a Play All option.

Making Sabotage: (8:32) Despite the requisite back-patting, this is a nice little featurette that shows the actors going through firearm training and seemingly building a nice amount of camaraderie. Schwarzenegger says he wanted to work with Ayer after seeing End of Watch, while the director was excited about the prospect of “dirtying up” his star.

If you adjust for inflation, Sabotage is actually the lowest-grossing movie in Schwarzenegger’s career. (Ouch!) In my opinion, the film doesn’t at all deserve that dubious distinction.

The movie’s flaws are difficult to overlook,  and they make it hard for me to recommend you watch it. But it’s got one of the more interesting performances of Schwarzenegger’s career, and it’d be a shame if he abandoned that sort of professional curiosity and reverted to cranking out sequels to safer, more established properties…whoops, too late!