Posted in: Disc Reviews by Gino Sassani on August 14th, 2014 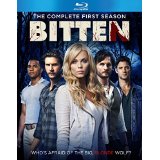 The television landscape has been flooded with shows about the supernatural. Vampires have been particularly hot topics in recent years, but werewolves are starting to get their own sub-genre going. MTV’s Teen Wolf manages to pull the theme off quite well. It’s no surprise that pretty much every network out there wants to throw their own hats into the supernatural ring. It’s getting quite crowded, but the popularity appears to have no end. Of course, with such a crowded field you have to find a way to stand out from the rest. That’s what I was hoping to find when I started to dig into the Blu-ray release of Bitten. Unfortunately, the results aren’t as impressive as I had hoped.

Bitten tells the story of Elena, played by Smallville’s standout actress Laura Vandervoort. Elena is a werewolf who has left her pack behind to try to live a normal life in Toronto. She gets a job as a photojournalist and even manages to find time for a more artistic approach to her photography. She has just moved in with boyfriend Philip (Greene) who is unaware of her supernatural alter-ego. Just as she’s trying to build that relationship, she gets a call from her pack alpha Jeremy, played by Greg Bryk. That call is going to throw a bit of a monkey wrench into that normal life she was hoping for.

Back in the small town of Bear Valley, Jeremy heads the Danvers clan of werewolves. Leaving is not such an option, and when Jeremy calls, Elena is compelled to answer. There is a crisis in the werewolf world. Bodies are showing up mutilated by a wolf. Someone is breaking one of the society’s prime directives not to kill humans (unless they witness a wolf’s “change”). The killings are the result of something called a mutt. These are werewolves who do not belong to a clan or pack. Think of the factionless in Divergent. The packs rule the werewolf world and consider themselves the enforcers, particularly for mutts who they keep on a short leash, if you will. Elena is the pack’s best tracker, and the pack needs to put a lid on these killings before the local law starts to ask rather uncomfortable questions. Of course, Elena answers the call with the belief/hope that she’ll be returning to her Toronto life as soon as the mutt is stopped. Dream on, Elena.

Once in Bear Valley, the plot starts to thicken, albeit very slowly. The mutts are getting tired of living under the thumb of the pack, particularly the Danvers, and are fighting back. Someone is biting and turning sociopaths into werewolves and leaving the carnage at the Danvers’ doorstep, a rather large estate called Stone Haven.

From the very beginning one can see there is great potential here. The show is based on a collection of books that appear to be popular. They’re called The Outworld series, written by Canadian author Kelley Armstrong. The show avoids most of the standard clichés. There is no full moon reference at all here. The werewolves “change” at will or when emotionally charged (“you won’t like me when I’m angry”). There are no silver bullets. These guys might be stronger and harder to kill than a human, but severe body trauma or blood loss kills them just like anyone else. No pentagrams or wolf bane to be found in the show.

The show is at its best when it tells the story from the point of view of Elena. She’s a unique character in this world. She’s the only female werewolf known to ever exist. The idea is that women are not physically strong enough to survive the “change”, and only boys carry the trait genetically. That puts Elena in a rather unique and clever place both for the show and werewolf mythology. It’s enough to carry the series beyond the rather overused plot of a hero trying to escape who or what they are. Vandervoort is also a good enough actress to be interesting, and even at times compelling, in the role. She’s not getting any help here from the writers, cast or crew.

The problem is that the show can’t seem to make up its mind from exactly what viewpoint they want to tell the story. While I suspect the books are more consistent in this point, the show too often strays. It offers sudden changes in point of view and offers a complicated plot of relationships and concepts that it never fully delivers upon. Too often episodes meander through plots from an exposition angle. There are a lot of scenes with characters gathered around talking about how dire things are. It’s a werewolf show with little werewolf action. I understand the budget realities here, and I honestly respect a choice not to fall into a cliché, but the show spends a lot of time going absolutely nowhere. I’ve found flaws in supernatural shows before. This is first time boredom was one of them. These clan guys are supposed to be smart, but I really got tired of how many times they walked into an ambush. Are you the kind that likes to yell at the screen things like “It’s a trap, stupid” or “Don’t go down that road, stupid”? If you are, you’re going to go hoarse on this show.

It doesn’t help that the cast is particularly weak and unable to carry all of this standing around talking. Greg Bryk as the alpha Jeremy literally puts me to sleep. I’ve never encountered such an uninspiring leader before. His performance makes Elena’s reluctant loyalty a little incredible. The other “cousins” are little better. Greyston Holt plays Clay. He’s the one who bit Elena and was a former lover. The show attempts to play on her being torn between Clay and Philip, but Clay’s really only good at brooding. He’s got that look down stone cold. There’s no chemistry between Vandervoort any either of these two actors. Again, that ends up making it harder to suspend belief. The better of the werewolf actors is Paulino Nunes, who plays Jeremy’s consigliore but is too little used to take advantage of his atypical look and style. Michael Luckett plays Santos, the main foil of the season. He’s supposed to be in charge of this rebellion, but he doesn’t act like he could be in charge of anything, while the actor spends too much time hamming it up for the cameras. Worse is Fiona Highet as the sheriff. She is abysmally bad here and one of the worst performances I’ve seen in a regular television series. She acts like she’s reading every line and is about as wooden as Spanish galleon.

The werewolves themselves are actually not bad. They do have an obvious CG look to them necessitated by budget on a small television production. But I rather like the design, and there are some pretty solid facial moments where I saw more emotion than I did with some of these actors.

The show’s pace is the real killer. The action doesn’t really start heating up until around episode 10. Things actually got pretty good for a while, and it seemed like the show would finally live up to its potential. I found myself asking what in the heck they were waiting for. When you only have 13 episodes, you really can’t stand around doing nothing for 40 minutes at a time. Even in the end the show failed to go anywhere at all. The final reveal felt like I had been watching a setup for the real show, which I guess might actually start next season. Let’s hope, anyway.

The show appears to be targeted toward a more female audience. Like Teen Wolf there are a lot of guys running around without shirts. Vandervoort gets her fair share of near-naked and sex scenes, so the guys haven’t been totally neglected. The characters make it a point to strip before changing. Credit the show for focusing on one kind of supernatural creature. There are no vampires, fairies, reptilian monsters or other forms of shape-shifters even mentioned here. Shows like True Blood have gotten completely carried away with these sideshow antics.

You get 13 episodes on four discs.

Each episode is presented in its original broadcast aspect ratio of 1.78:1. The 1080p image is arrived at with an AVC MPEG-4 codec at an average 30 mbps. The show is quite natural-looking. Colors and lighting look pretty realistic except during the highly stylized fight scenes. These make so much use of cheap speed-up/slow-down techniques that it takes away from the overall presentation. Black levels are solid. Of course, there’s a different texture or feel to the CG material that’s an unfortunate result of the show’s budget. The Canadian locations are quite nice, and the normal image is sharp and clean. The blood-red colors stand out quite a bit. It’s a bit brighter than usual and has a pretty visceral texture. Hats off to the makeup effects guys and the production design crew.

The DTS-HD Master Audio 5.1 isn’t all that aggressive. There’s a ton of talking heads stuff here, and that’s what is truly served by this audio presentation. The show features the trendy song montage bits, and the music is dynamic and clear. Once in a while we might get some wild sounds in the woods. There’s an opportunity missed here to use sound to enhance the shortcomings of the CG budget. Sound can go a long way to making something feel more real. Not so here.

There are commentary tracks on select episodes.

Behind The Scenes: (8:42) Cast members describe their characters. There’s talk of the books here as well. Mostly there are too many clips and few behind-the-scenes moments. Crew members fill in some blanks with background on the story. It unfortunately reflects how much doesn’t actually come across on the screen. I picked up way too much new information on the plot and characters here. It should have been on the screen in the episodes.

VFX Behind The Wolf: (4:26) Atmosphere Visual Effects did the werewolf stuff, and they take you on a journey to explore the various phases of f/x work.

Deleted/Alternate Scenes: (16:36) All together with no individual episode or scene selection.

Stunt Choreography: (8:40) The cast got to do many of the stunts and wire work. This is a brief look at some of these scene specific stunts. It’s picture-in-picture comparison with the final scene.

There’s a lot of wasted potential here. The good news is that there’s room for improvement, and they’ll get a second season to try to right the ship here. There were too many moments when it looked like the show wanted to cut loose but held back. Hopefully those jitters will go away now, and the fans of the books will get a chance to see their favorite world come to life. If not, there’s more disappointment ahead and a short future for Bitten. Trust me, I wanted very much to love this show. When the release came to Upcomingdiscs someone had to review it, “and like an idiot I volunteered”.

Gino Sassani is a member of the Southeastern Film Critic's Association (SEFCA). He is a film and television critic based in Tampa, Florida. He's also the Senior Editor here at Upcomingdiscs. Gino started reviewing films in the early 1990's as a segment of his local television show Focus. He's an award-winning recording artist for Omega Records. Gino is currently working on his 8th album Merchants & Mercenaries. Gino took over Upcomingdiscs Dec 1, 2008. He works out of a home theater he calls The Reel World. Favorite films: The Godfather, The Godfather Part II, The Body Snatcher (Val Lewton film with Karloff and Lugosi, not the pod people film), Unforgiven, Gladiator, The Lion King, Jaws, Son Of Frankenstein, The Good, The Bad And The Ugly, and Monsters, Inc.
Agency of Vengeance: Dark Rising The Expendables 3