The Possession of Michael King (Blu-ray)

Posted in: Disc Reviews by Brent Lorentson on August 27th, 2014 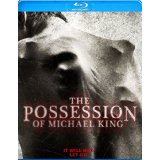 Here is a film that delves into a subject not many people care to openly discuss but poses a question that everyone who’s lost someone they love can relate to.  When prayer and faith don’t seem to deliver the answers you want for those that need closure that therapy can’t seem to provide, where does one turn?  It’s this hopeless feeling of loss that seems to be what attracts Michael King (Shane Johnson) to investigate the possibility of the supernatural.

The approach to this film is actually something that I’d like to see done in a real documentary form.  Here we get to watch Michael, a self-admitted atheist, document himself as he meets with everyone from priests and demonologists to necromancers and psychics.  His hope is to either document evidence or prove without a doubt that there truly is nothing that awaits us beyond the grave.

Our first look at Michael is through footage he shot during happier times, with his wife and daughter.  It’s not long after this footage is shot that his wife tragically dies.

As for Michael’s supernatural documentary, the overall look is better than most of these found-footage films.  Tripods seem to be used for some interviews, and the camera operator seems to have a relatively steady hand.  As Michael takes part in several rituals, the camera never leaves his side, and what follows are some fairly convincing scenes of people performing rituals of the occult.

Changes do seem to take place, but these changes are seen through cameras that are locked down at his home.  The locked down cameras do have moments of resembling Paranormal Activity, but it isn’t too distracting.  When the “demon” seems to be taking control of Michael and he is left alone to document his changes, the film seems to continue to grow unsettling.

Though the film has some genuinely creepy moments that make for some creepy experiences when watching this late at night with all the lights out, it unfortunately follows a far too predictable path.  During the film’s third act it seems to have lost its steam and seems to be just adding creepy moments to do nothing more than just stretch out the film longer.  The stretching out of the third act really hurts the film’s final confrontation with the “demon”.

I can’t fault the film for delivering scares, and there are a handful of solid jump scares here along with its creepy subject matter, but it does feel as though first-time writer and director David Jung is throwing everything into this film.  Less is so much more.  Instead of being in our face and at times piercing our ears with loud sounds, simply allowing nothing and silence could have been just as, if not more, effective.  Had this film come out a few years sooner, this is a film that would have been a box office smash; unfortunately this is a film that may find itself lost in the glut of straight-to-video found-footage films.

The Possession of Michael King is presented in the aspect ratio 1.78:1.  The 1080p image is arrived at with an AVC MPEG-4 codec at an average of 30mbps.  As found-footage films go, this is one of the best looking of the genre.  The separation of blacks and details you can see in the shadows is impressive.  The detail captured when the crew enters the room the demonologists use for rituals is impressive, but it’s the gory details that we see from some self-inflicted wounds that stuck with me.  There are no artifacts to be found; this is a really nice transfer.

The Dolby True HD 5.1 track is a stunning track.  Director David Jung uses the sound design to make some creepy moments have the viewer jumping out of their seats.  Compressing the sound so when we suddenly get hit by a barrage out loud sounds or demonic screams is extremely effective when watching this in the middle of the night.  Some may want to turn down the volume a bit just so you don’t wake the neighbors when some of these jump scares occur.

There are no special features, but the Blu-ray does come with a DVD in the package as well.

I have to admit this film did a good job at creeping me out.  The first half of this film works really well before it falls into the realm of scares we’ve seen before.  The execution of this found-footage film is much better than some of the films we see released on the big screen; hopefully this will find an audience on Netflix with Halloween just around the corner.

Brent Lorentson is a horror writer and film critic based out of Tampa, Florida. With a BA in Digital Film, he co-wrote and co-directed Scavenger Hunt. His short stories have appeared in various horror anthologies. In 2019 his short script Fertile Blood will be a part of the anthology horror film Slumber Party. He is currently working on his first novel A Dark and Secret Place set to be released in late 2019. Favorite Films: Taxi Driver, Fight Club, I Saw the Devil, The Wild Bunch, Dawn of the Dead, A Clockwork Orange, Pulp Fiction, Heathers, The Monster Squad, and High Fidelity.
William Shatner’s Get a Life! High School Confidential! (Blu-ray)