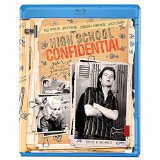 “You have just seen an authentic disclosure of conditions which unfortunately exist in some of our high schools today. The job of policemen will not be finished until this insidious menace to the schools of our country is exposed and destroyed.”

“Authentic” is probably a stretch, but High School Confidential! is certainly fascinating for a variety of reasons. Every generation has an alleged scourge that invades high schools and threatens to rip apart the very fabric of society. (Cue masterpiece eye roll.) In 1958, that menace went by the name “Mary Jane.”

I suppose a little background would be helpful. High School Confidential! was produced by Albert Zugsmith, an independently-wealthy former journalist who bankrolled 1950s genre classics like 1957’s The Incredible Shrinking Man and 1958’s Touch of Evil. Zugsmith also produced alarmist exploitation dramas like 1958’s High School Confidential! — not to mention 1960’s College Confidential — which intensely depicted unwholesome subjects in a way that probably seemed campy even back then. (Witness the over-the-top exclamation point in this movie’s title.)

High School Confidential! is the story of Tony Baker (Russ Tamblyn), a hip, tough-talking transfer student who arrives for his first day of school at sunny Santa Bellow High. Tony is determined to make waves with the Wheelers and Dealers, the ruling gang at the school led by big man on campus J.I. (John Drew Barrymore; you can probably guess which famous actress he later fathered). He also has his eye on J.I.’s girl Joan (Diane Jergens), whose well-to-do father is oblivious to her increasingly nasty drug habit. Armed with a giant stack of cash and an even bigger mouth, Tony successfully barrels his way onto the local drug scene. He eventually draws the attention of shadowy local drug lord “Mr. A” (Jackie Coogan), who capitalizes on the fact that marijuana is secretly a gateway drug to harder stuff like heroin.

Or at least the movie acts like that’s a totally hard-and-fast result of smoking marijuana. High School Confidential! desperately wants to be a no-holds-barred exposé about the dangers of young people taking drugs. And, to its credit, the movie is actually made quite well. (Especially for what is essentially an exploitation flick.)

The director is Jack Arnold, who collaborated with Zugsmith on Shrinking Man, but is probably best known for making 1954’s Creature from the Black Lagoon and 1959’s The Mouse that Roared with Peter Sellers. The sex, drugs, and rock & roll of High school Confidential! are each presented with infectious vitality, starting with the movie’s fantastically energetic opening credits sequence. Jerry Lee Lewis appears as his possessed-looking self performing the film’s title track on the back of slow-moving truck. Meanwhile, the “sex” is largely covered by Mamie Van Doren’s shapely presence as Aunt Gwen, who provides room and board for Tony.

Overall, High School Confidential has a solidly competent cast of actors navigating the film’s tricky lingo and melodramatic story. Tamblyn isn’t totally convincing as Tony. Fortunately, that slight lack of believability ends up working well for the character since Tony’s cocksure swagger is revealed to be something of a façade. That added dimension also helps distract from Tamblyn looking way too old to play a high school student. At least he’s better off than Barrymore — radiating a more confident cool — who looks way, WAY too old to be playing a high school student. (Clearly, this is not a new phenomenon.) I also enjoyed the scary turn by Coogan (TV’s future Uncle Fester on The Addams Family) and Jan Sterling’s performance as Mrs. Williams, the caring teacher who believes there are no bad kids and takes a shine to Tony. (At times, it seemed like she took too much of a shine to her student.)

The biggest problem with High School Confidential! also doubles as its most amusing quality: the movie’s anti-drug message is delivered with zero finesse or subtlety. There’s none of the vigor or creativity that Arnold uses to stage a dangerous road race, for example. The 86-minute film also devotes a relatively luxurious amount of time to beat poems about Christopher Columbus and how tomorrow is a drag.

In other words, the film’s actual message is delivered in such a forced, stodgy way — people who smoke marijuana are actually called “weedheads” at one point — that it unintentionally makes the sex, drugs, and rock & roll the movie allegedly condemns seem much more appealing.

High School Confidential! is presented in an aspect ratio of 2.35:1. The 1080p image is arrived at with an AVC MPEG-4 codec at an average of 33 mbps. This is a fine-looking transfer that nevertheless shows its age. The Blu-ray, courtesy of Olive Films, offers a rather handsome B&W presentation with nicely inky black levels and surprisingly vibrant lighter shades. Contrast appears to be pretty spot-on. The biggest problem, in fact, is the persistent flecks that pop up on all parts of the screen throughout the film. To be clear, there isn’t any major damage on display at all; this is closer to death by a thousand cuts. Except in this case, the issue isn’t close to being a killer.

The DTS-HD Master Audio 1.0 makes a terrific first impression. Despite its mono limitations, Jerry Lee Lewis’ rollicking performance of “High School Confidential” is astonishingly clear and robust. After that sterling opening, the track rather starts to show its age. But the minimal hissing and popping don’t do much to distract from the dialogue, which is presented quite clearly throughout. (Although I do wish the disc included subtitles; it might’ve been fun to include a “Plain English” track that translated the younger characters’ lingo.)

The total lack of special features is a letdown given the movie’s notable cast and crew, as well as its Reefer Madness-esque evolution into something of a camp classic.

But if you’ve never seen High School Confidential! — and you’re interested in a snapshot of late 1950s America that is interesting on several different levels — give this Blu-ray a toke spin.