Posted in: Disc Reviews by Brent Lorentson on September 18th, 2014 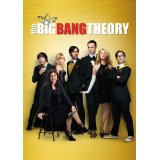 In case you’ve been hiding beneath a rock the past few years, The Big Bang Theory isn’t just a hit TV show, but instead it’s a show that has ingrained itself into pop culture.  You can go out to most major retailers and find shirts with “Bazinga”, and I’m willing to bet at least one of your Facebook friends has posted a GIF on their feed about the show.  It’s a show I told myself I wouldn’t get caught up in because I was so sure it was nothing more than a fad.  It took being sick with the flu a couple years back and a determined friend lending me the first four seasons of the show for me to sit back and give it a chance.  Before I was finished with the first season I found myself embracing the show and just feeling like a dunce for waiting so long.  After all it’s a show about movie and comic book geeks, aka “my people”.  In other words, for those who have missed out on this show, believe the hype; it really is that good.

It’s been seven seasons since we first met roommates Leonard (Johnny Galecki) and\ Sheldon (Jim Parsons) along with their beautiful neighbor across the hall, Penny (Kaley Cuoco-Sweeting).  Over the years we’ve watched these characters evolve and take leaps in their relationships and other avenues in their lives.  Sure, we’ve all been on board for the rollercoaster relationship between Leonard and Penny, but for fans the most shocking was when Sheldon (who just may be one of the funniest quirky characters written in years) finds himself in a relationship with Amy (Mayim Bialik).

The writers have done such a good job at delivering the viewers characters who are not only relatable but characters you’d want to have in your lives.  This season the writers stepped up their game, and instead of depending on the go-to catch phrase “Bazinga”, we get a lot more heart from all the characters this season.  One of the sweetest moments comes in a musical number composed by Howard (Simon Helberg) dedicated to his wife, Bernie (Melissa Rauch).  But even looking beyond the romance in the show we get to see the amusing and sweet results of Sheldon getting drunk on Thanksgiving and bonding with Howard’s father-in-law.

Some of my favorite moments over the season came in the form of the show’s connection to the Star Wars series.  In one instance we get to see the gang celebrate May 4th (Star Wars day). Sure, the episode has some somber moments, but it does have one of the more memorable appearances of a guest star stepping in as the role of Sheldon’s personal Obi Wan.  But the episode I can look back and easily label as the one I had the best time with is when the gang doesn’t get into Comic Con, and in a scramble Sheldon decides that instead of dealing with scalpers, instead he will create his own convention.  While on his hunt for celebrities to appear at his convention, Sheldon has an encounter with the voice of Darth Vader himself, James Earl Jones.  Jones seems to be having a blast during this episode, and it delivers some great laugh-out-loud moments.

So what about Raj (Kunal Nayyar)?  Well, no need to worry, he’s still around and making his interactions with the female sex as awkward as ever.  The light saber “duel” with Howard may be the highlight of the season.  The question of whether Raj will ever get a GF does play a factor in the show, but it’s something you’ll have to watch and find out for yourself.

Though there really isn’t much to complain about, what is rewarding is that it looks like we will be seeing some of our favorite characters making some major decisions down the road.  Season 7 comes to a close in a way I have to admit that I didn’t see coming; it’s something that leaves me a little concerned for what is next for the gang.  This is the closest to a real cliffhanger the show has left fans with and will be having fans anxiously waiting for the Season 8 premiere.

The Big Bang Theory Season 7 is presented in its original aspect ratio of 1.78:1.  The 1080p image is arrived at with an AVC MPEG-4 codec with an average of about 24 mbps.  When it comes to these kind of stage comedies, you need to set the bar a little lower than you would a non-sit-com series.  But where it does shine is that we do get a crisp image with no noticeable compression issues.

The DTS-HD Master Audio 5.1 track is a bit underwhelming.  While there may be no issues with the audio in the transfer, the audio is noticeably mixed for a home TV audience without a surround system.  Everything is heard mostly from the front speakers, though it is not as if there were moments that a more diverse soundscape would have made much of a difference.

String Theory Serenade (7:01)  A look behind all the work that went into one of my favorite moments in the series where Harold performs a song for Bernie.

2013 Comic Con Panel (29:10) Here we get to see the panel with the writers and producers of the show moderated by Melissa Rauch.

James Earl Jones The Un-conventional Guest Star: (5:39) This is a brief bonus, but it’s great to hear how Jones got involved and the cast and crew’s reaction to the episode.

BBTea Time (3:08)  It’s a short feature, but this is my favorite of the bunch with the girls and their teatime adventure with mini versions of themselves.

Big Bang Theory May the 4th Be With You (15:15) This is a fun feature where we see just how much involvement Lucasfilms had with the episode, seeing how they helped out with the effects with “Obi Wan”.

The Big Cendrowski Backstage: (16:06) Behind the scenes with the longtime director of the series.  Here we get to see him working and having fun on set.

Gag Reel ( 8:51) It’s been a while since I’ve seen a gag reel that was actually amusing.  These guys are simply fun to watch even when they are blowing their lines.

Though I’m not too big of a fan of sit-coms, Big Bang Theory is something I just can’t resist.  You’d expect by Sseason 7 the show would have run its course, but instead the show continues to go strong and still has plenty of heart and laughs.  If you haven’t experienced The Big Bang Theory yet, there’s no excuse; now is your time to jump on the bandwagon and have a blast.

Brent Lorentson is a horror writer and film critic based out of Tampa, Florida. With a BA in Digital Film, he co-wrote and co-directed Scavenger Hunt. His short stories have appeared in various horror anthologies. In 2019 his short script Fertile Blood will be a part of the anthology horror film Slumber Party. He is currently working on his first novel A Dark and Secret Place set to be released in late 2019. Favorite Films: Taxi Driver, Fight Club, I Saw the Devil, The Wild Bunch, Dawn of the Dead, A Clockwork Orange, Pulp Fiction, Heathers, The Monster Squad, and High Fidelity.
Exclusive Interview With The Ford Brothers From The Dead 2: India South Park: Season 17 (Blu-ray)