Posted in: Disc Reviews by Gino Sassani on September 18th, 2014 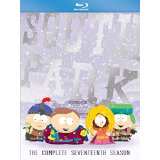 No, it’s just South Park. But it has invaded pop culture as much as zombies have over its amazing 18-year run. Trey Parker and Matt Stone have been walking a tightrope for over 18 years now, and it just doesn’t get old. One of the reasons the show doesn’t grow stale is their ability to make such a quick turnaround on current events. Because the show takes literally days to write and produce, they are quite often always the first to address an issue. They had an election-night episode on literally the next day in last season. That means the ideas stay as fresh as the headlines.

I’ve been a fan of South Park ever since a friend introduced me to the internet Christmas card that started it all. It was Santa versus Jesus, and these short potty-mouthed kids that somehow wormed their way under your skin. Pretty soon I was downloading the episodes and watching them on my computer. For some reason I can’t quite explain, I’ve very rarely watched an episode on Comedy Central. By the time things were getting tighter and riskier downloading the shorts, the single disc, 4-episode DVDs began to arrive in stores. So my South Park viewing moved from the PC to the DVD player. In a short time season sets began to arrive, and I looked forward to them with much anticipation, still watching it infrequently on television. After all, who needs the commercials and those silly network bugs that distract you on the screen? The series itself evolved in that time. The show was once achieved through a stop-motion process using construction paper cutouts. The animation was crude. After the Christmas card, the characters were significantly redesigned. They had a very evil look on that short. The first couple of episodes brought us an evolution toward the characters we know and love today. After a while the animation went to a computer process. The look remained the same, but gone were the paper cuts and stop-motion photography. As the show progressed there were less and less bleeps. It’s not that the language got any tamer. Standards got a little looser. Finally the bleeps would disappear from at least the DVD releases.

You have to credit the expanding universe of good characters. The core group of Cartman, Stan, Kyle, and Kenny were great for a lot of years. But we also have such great semi-regulars as Timmy, Jimmy, and Token. These characters allow the stories to expand in ways the core group could not.

So what about the episodes themselves? Let’s play a little game called The Good The Bad, and The Ugly, shall we?

Let Go Let Gov: Cartman is sick and tired of the government spying on citizens. Of course, he believes the NSA must have a huge file on him, and he wants to read what it says. He manages to infiltrate the organization as an employee only to find they don’t consider Eric Cartman a threat. The show also spoofs the Alec Baldwin rants with a new social media that allows implants on your head to instantly post your thoughts on the net.

Taming Strange: While I could just as easily put this one in the Ugly category, I decided that it deserved points for being clever. Ike is subjected to hormones that have brought on premature adolescence. It’s straining his relationship with Kyle. The drugs were a mix-up in the computers of the Canadian Health Care System. Meanwhile the school has adopted smart technology for all routine tasks like scheduling appointments with Mr. Macey and controlling the PA system. Of course, it’s a nightmare that just sucks them in deeper. It’s all a spot-on reflection of the ObamaCare computer mess-ups. Ike’s perverted behavior weakens the show and almost landed this one as Ugly.

Ginger Cow: Cartman’s practical jokes have a way of backfiring big time. This one almost plunges the world into…peace. When he dresses up a cow to appear to have red hair the joke doesn’t fool his friends, but it does fulfill a prophecy for Christians, Jews and Muslims that brings them together in peace. Cartman takes full advantage of the situation when he threatens to come clean and ruin it for everyone.

A trilogy of episodes attempts to reproduce some Game Of Thrones moments with the video game console wars. The show also deals with people who camp out at stores for those crazy Black Friday specials. I love the idea, and many of the sequences do a pretty brilliant job of mimicking aspects of Game Of Thrones. Unfortunately, it suffers from obvious padding to stretch it out into three episodes and becomes far too repetitive. This one falls in the Bad category but might more accurately be described as a near miss.

The Hobbit: Wendy appears to be Jell (jealous) when Butters shows so much affection for Kim Kardashian. She tries to point out that Kim doesn’t really look that way and that it’s all Photoshop. Her demonstration backfires when she makes the “fat” kid look glamorous and the envy of the entire school. The title references the “haters” calling Kim a Hobbit. This just falls into the “who cares” department.

World War Zimmerman: The Zimmerman trial gives Cartman nightmares that a black mob will threaten his future family if unchecked. In a send-up of World War Z, the show attempts to tie the zombies in with potential rioters, and Cartman sports a Brad Pitt fuzz face. They tried to do way too much here, and it’s all so forced. This one might have been better as the trilogy while the other might have made a better single episode. The result is one of the worst episodes I’ve ever seen.

Stone and Parker are back with their “commentary minis”. The boys do address the controversy in the minis but turn it into a joke; when they say they’re about to explain, you get two minutes of beep and are returned to them saying that was basically the story.

Social Commentaries: These are basically text commentaries in the form of tweets.

The show has always been great at poking fun of the big items in the news. This season has been no exception. We get spoofs of the George Zimmerman and Snowden situations, of course. They also have the ability to get to the social issues of the day. The quick turnaround of the show from idea to air allows them to be as relevant as anything out there. It’s an advantage I hope to see the series take for years to come. It’s hard for me to imagine a world where there is no South Park. It’s a good collection, but one of the episodes is an all-time low for the series. “That sure wasn’t much of a zombie apocalypse.”

Gino Sassani is a member of the Southeastern Film Critic's Association (SEFCA). He is a film and television critic based in Tampa, Florida. He's also the Senior Editor here at Upcomingdiscs. Gino started reviewing films in the early 1990's as a segment of his local television show Focus. He's an award-winning recording artist for Omega Records. Gino is currently working on his 8th album Merchants & Mercenaries. Gino took over Upcomingdiscs Dec 1, 2008. He works out of a home theater he calls The Reel World. Favorite films: The Godfather, The Godfather Part II, The Body Snatcher (Val Lewton film with Karloff and Lugosi, not the pod people film), Unforgiven, Gladiator, The Lion King, Jaws, Son Of Frankenstein, The Good, The Bad And The Ugly, and Monsters, Inc.
Big Bang Theory: Season 7 (Blu-ray) Tusk